Walking the Cardo in Jerusalem and Ending at the Garden Tomb

Another day in Jerusalem was memorable.  We began the day heading toward the Zion Gate.  This gate is where paratroopers dropped in during the Israeli War of Independence and there are bullet holes all over the walls.  It's amazing.  While we were standing in front of it a number of cars drove through.  This blew me away.  The gate is about as wide as a minivan and the turn is about 180 degrees once a car comes through.  I couldn't believe it.  Most cars had dents and scratches on the sides.  That's par for the course regarding cars around the city. 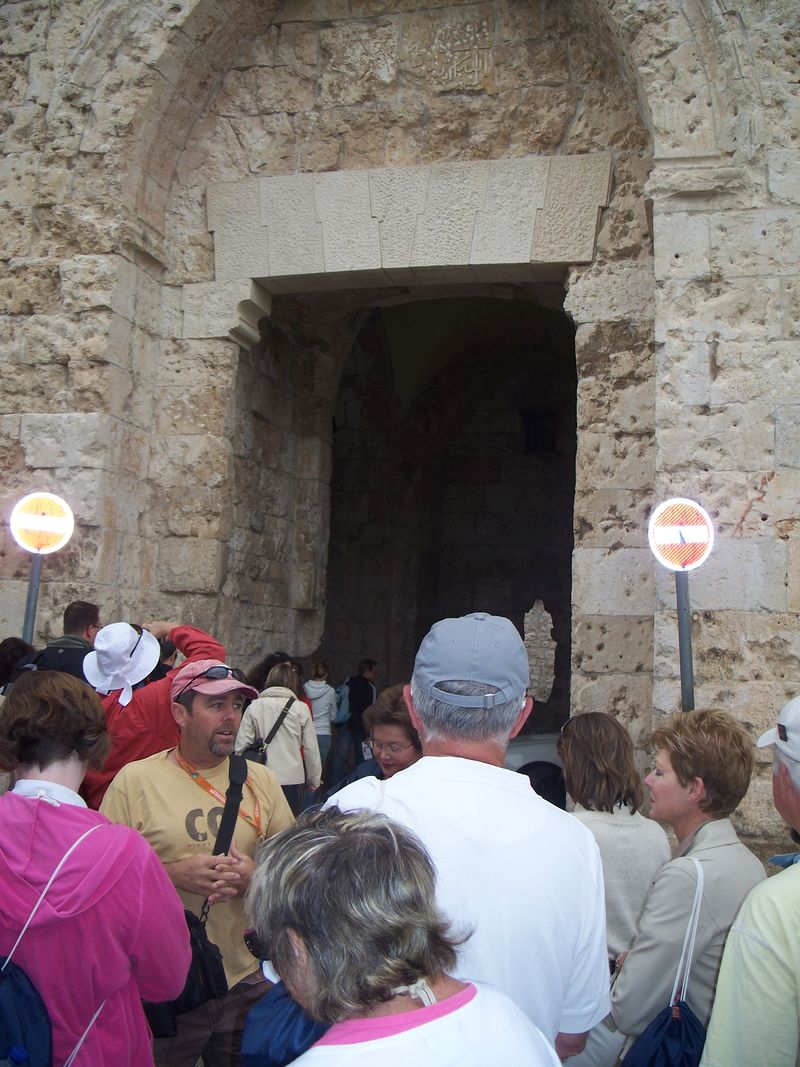 Yoni, our guide, calls this "bogus Zion gate" because it is not near the historical Mt. Zion.  It's a location picked by Crusaders and the history of the real Zion doesn't support it.  We discover pretty quickly that there are two of everything in Jerusalem - two Mt. Zions, two burial sites, two Calvaries, two everything.  It's based on who owns the site, who thought they discovered a site and politics.  Sometimes it's just based on honest mistakes.

We went to the Cardo and then to a site believed to be the High Priest's home during the first century.  This site was uncovered in the 1980s when contractors were beginning to build Jewish homes and businesses in newly Jewish owned areas of the Old City.  This site is incredible.  It is here that Caiaphas lived during Jesus day and here that Peter stood in the courtyard of the high priest and denied Christ three times.  We stood in this courtyard.  Sobering.  Guess what?  When we left the site and moved over to Silwan (the City of David) we heard a rooster crow.  Hmmm.

We looked over the City of David and watched a film covering the time of David and the Old Testament kings up to the present.  It was even in 3D.  Nice film.  Helped to show the ancient sites in comparison to the new sites. 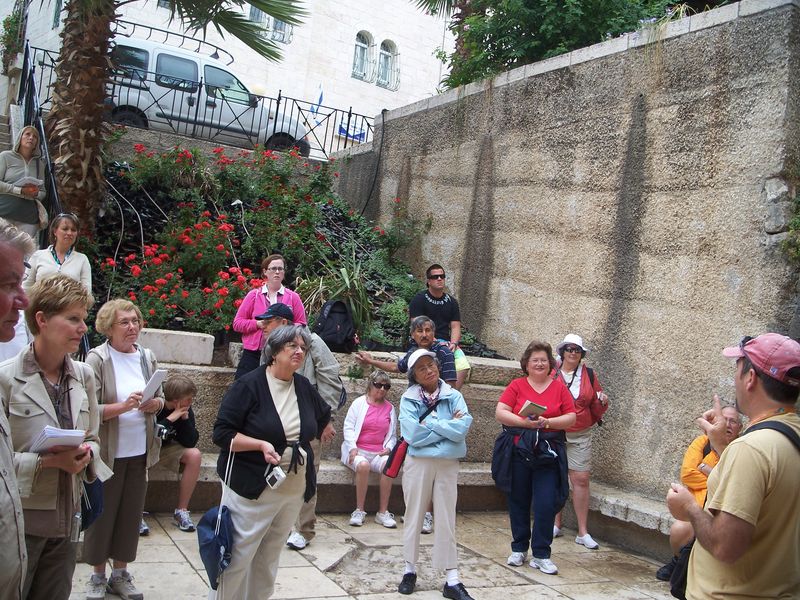 From here we divided into three groups.  There are two tunnels that have been uncovered.  These tunnels in the rock were tight and not for folks with claustrophobia.  One tunnel comes from Canaanite times and is a dry tunnel.  It's about 200 yards long.  The other tunnel is filled with about a foot of water and is about 600 yards long.  The wet tunnel is called Hezekiah's Tunnel.  It brought water from the Gihon Spring to the Pool of Siloam.  Our three teams were the dry tunnel team, the wet tunnel team and the coffee shop team (these folks didn't want to brave the tunnel.) 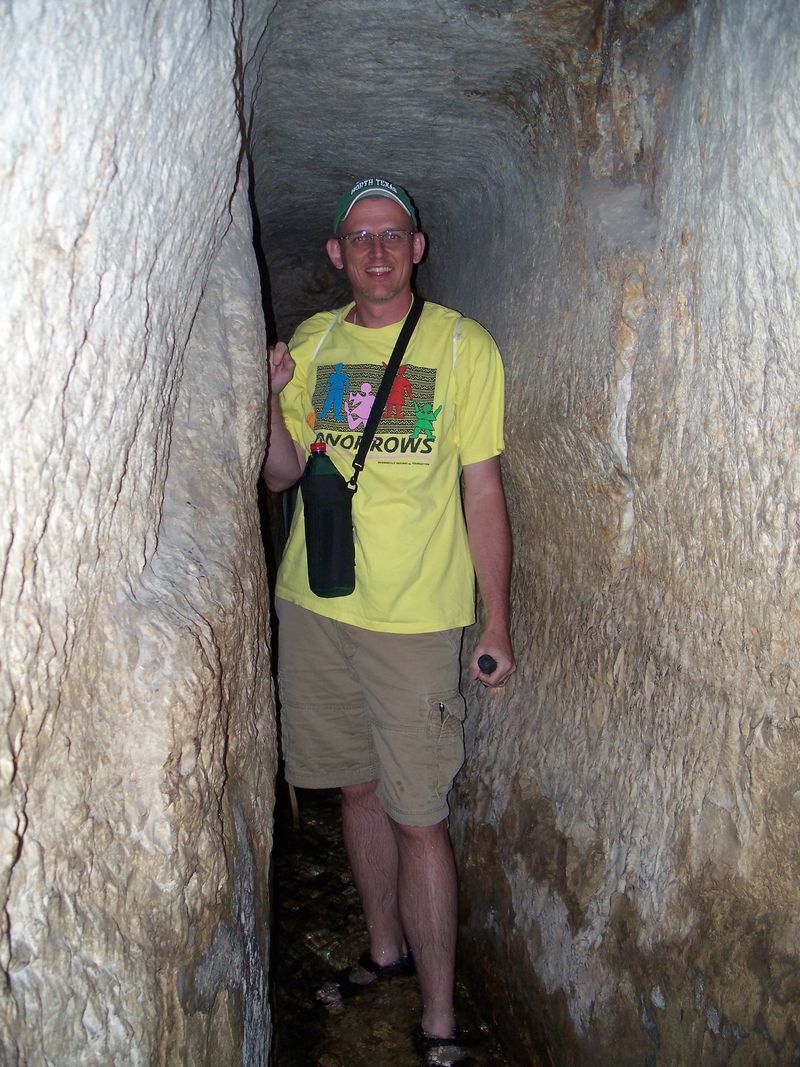 The last stop big stop of the day was at the Garden Tomb.  This wonderful site is maintained by a group from the U.K.  It was discovered years ago by General Gordan from Britain and is a site outside the city at the time of Christ and is near a mountain that looks like a skull.  Could be Golgotha.  There is even an empty tomb that was discovered.  Is this the site?  Well, most archeologists and historians say no, but it is the best site for personal reflection and to think of the Resurrection.  As our guide (a former pastor from a Baptist church in Tampa) said "We're here to look at nothing.  This is because the tomb is empty and Christ is alive."  There were many people here today.  We even saw former NFL commentator Pat Summerall.  We left him alone, but it was pretty cool to see him.  We ended our time here taking Communion or the Lord's Supper. 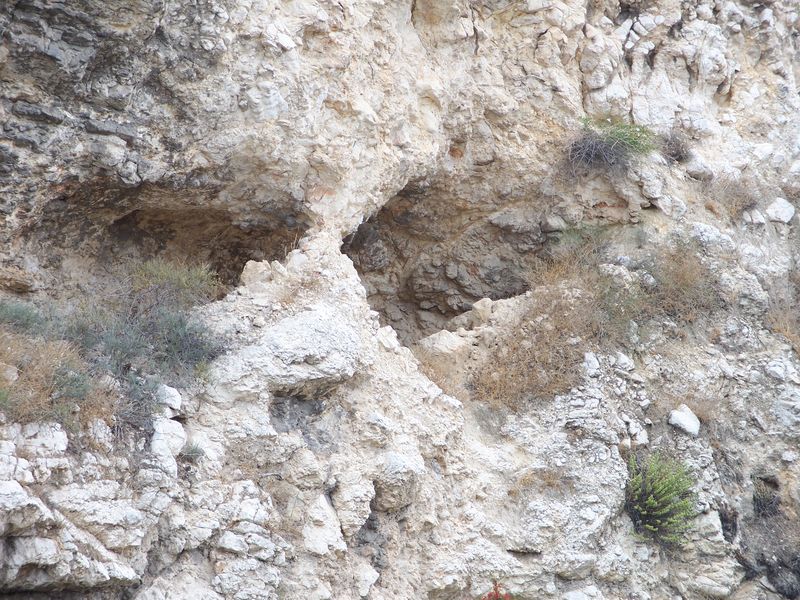 A Day at Masada, En Gedi and Qumran

Yesterday we awoke at our hotel on the Dead Sea and began the trek to three sites on the western side of the Dead Sea (yes, the West Bank.)  We first stopped at Masada.  This desert fortress built by Herod the Great still stands as a marvel of engineering.  To build a palace fortress in this location is almost too incredible to believe, but it was done.  Herod died before ever getting to stay at his palace and once he died the Romans took ownership.  Masada is now known as the site where a group of Jewish zealots had their last stand against the Roman army following the destruction of the Temple in 70 AD.  There has been a movie made about this and the story is incredible.  Just like "Remember the Alamo" became a rallying cry for Americans a little over a century ago, "Remember Masada" has become a message for the Jews.

From there we traveled to En Gedi.  Read about this location in 1 Samuel 23.  It is the location where David took refuge from Saul.  In fact, it's the area where David was hiding in a cave as Saul went in to relieve himself (which, according to biblical Hebrew probably means to get a leg massage and take a nap after the long hike and ride from Jerusalem, rather than "go to restroom" as many commentaries state) and where David cut off the corner and tassle from Saul's robe.

Then, we traveled north to Qumran, site of the Essene sect and where the Dead Sea Scrolls were discovered.  After viewing the film and learning about this sect of Judaism that was known for it's strange practices, bent toward strong predestination teaching of God, and desire to disconnect from society (more being learned and discovered by the Essenes all the time) some of our group decided to hike up the mountains a little and three of our guys climbed the mountain to go into Cave 6 where some scrolls were discovered.

Our day ended with a stop over at a wadi and a view of the canyon (known as the "Valley of the Shadow of Death" in ancient times - which gives some insight into David's 23rd Psalm) we read some Scripture and bartered with bedoin children selling "camel bone" necklaces and a couple of our folks rode a camel (only $5).

Our day ended with our drive into Jersulem.  We stopped at Mt. Scopus for a photo opp and then moved on to the hotel.  Great day.  Tomorrow we tour the Old City, beginning with the Temple Mount, some holy sites (which means sites owned by the Catholic Church) and into Hezekiah's Tunnel. 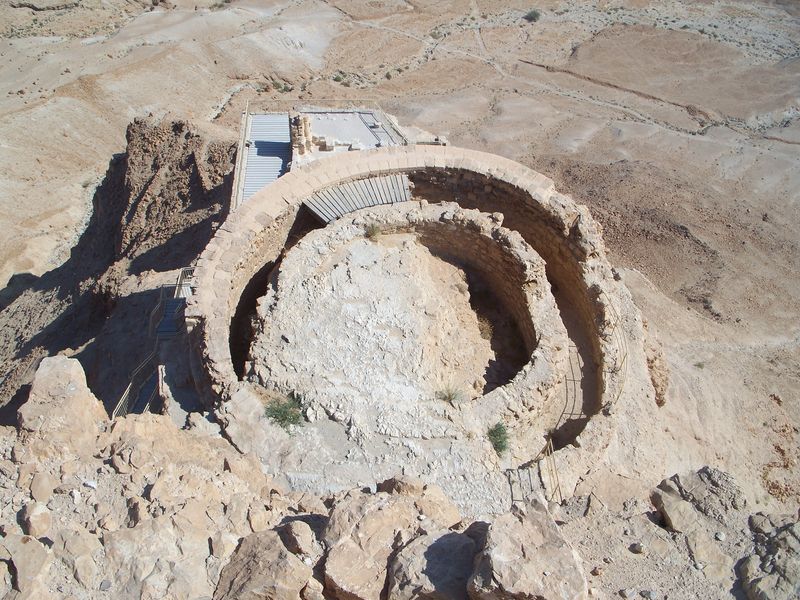 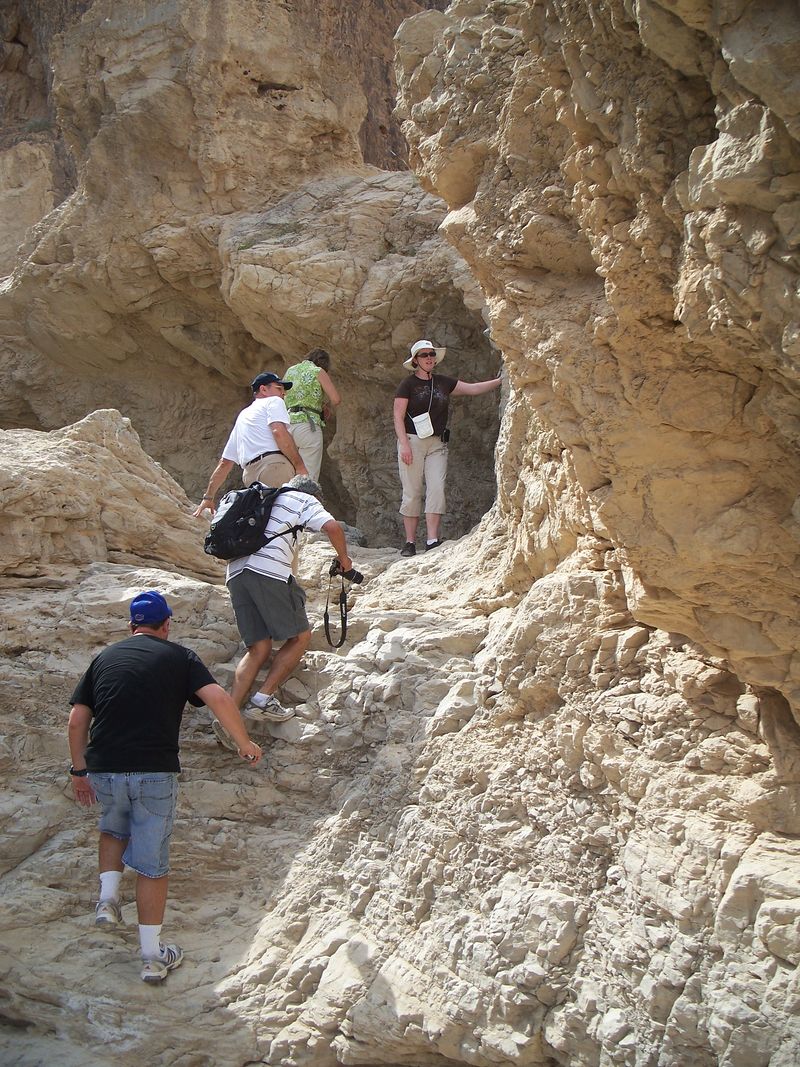 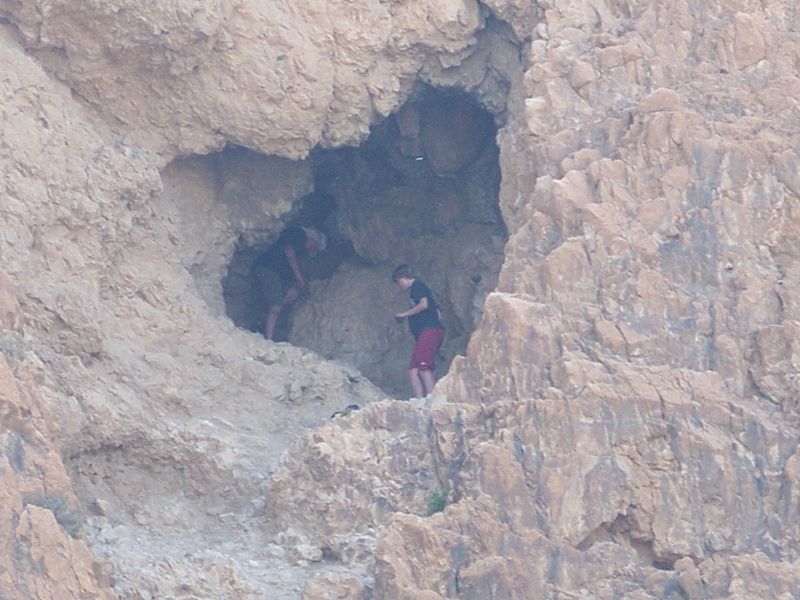 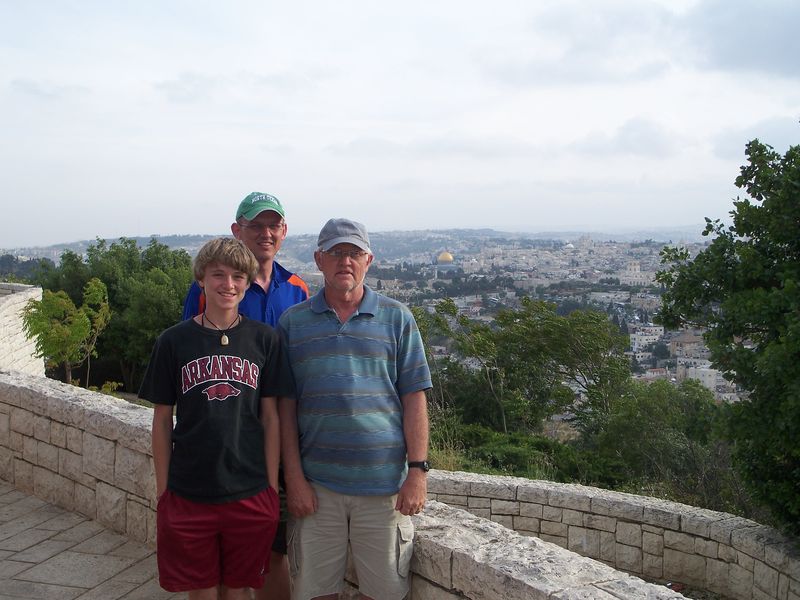 Working Around the Galilee

For the fourth time in my life, I have journeyed from Caesarea and around the Galilee region with Yoni Gerrish.  Once again, I am amazed at the teaching.  I have heard Yoni share about Jesus and His Jewish heritage before.  I love hearing how Jesus' Torah training and the understanding of first century Judaism make the Bible come to life (and in some cases make much more sense.)

I see the lights going off in some of our team members and they hear familiar Bible stories in a way and in a place that make them seem brand new again.  The freshness of the teaching is wonderful.

I'll write more once I get back, especially since I have limited internet and still need to go through my notes some more.

In the meantime, here are some pics of our journey from Caesarea to Tsippori to Dan to the Galilee. 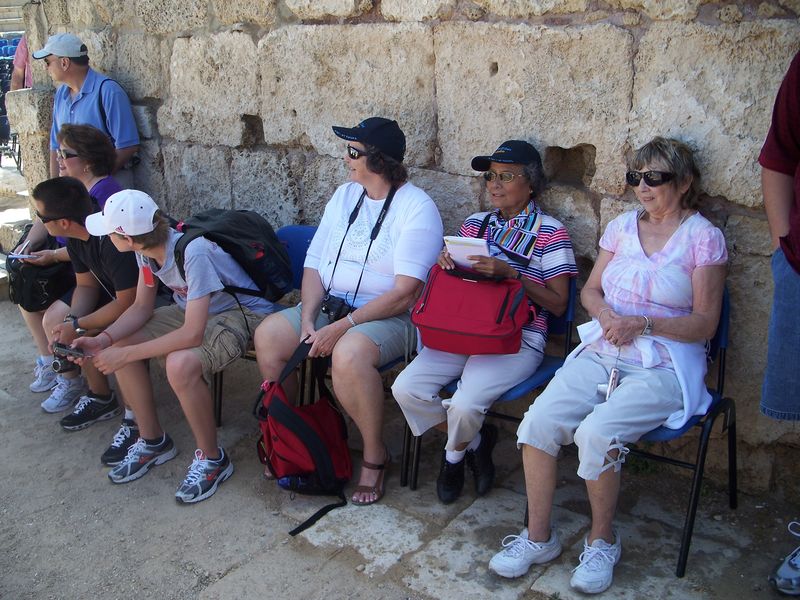 The group taking a break at the theater in Caesarea. 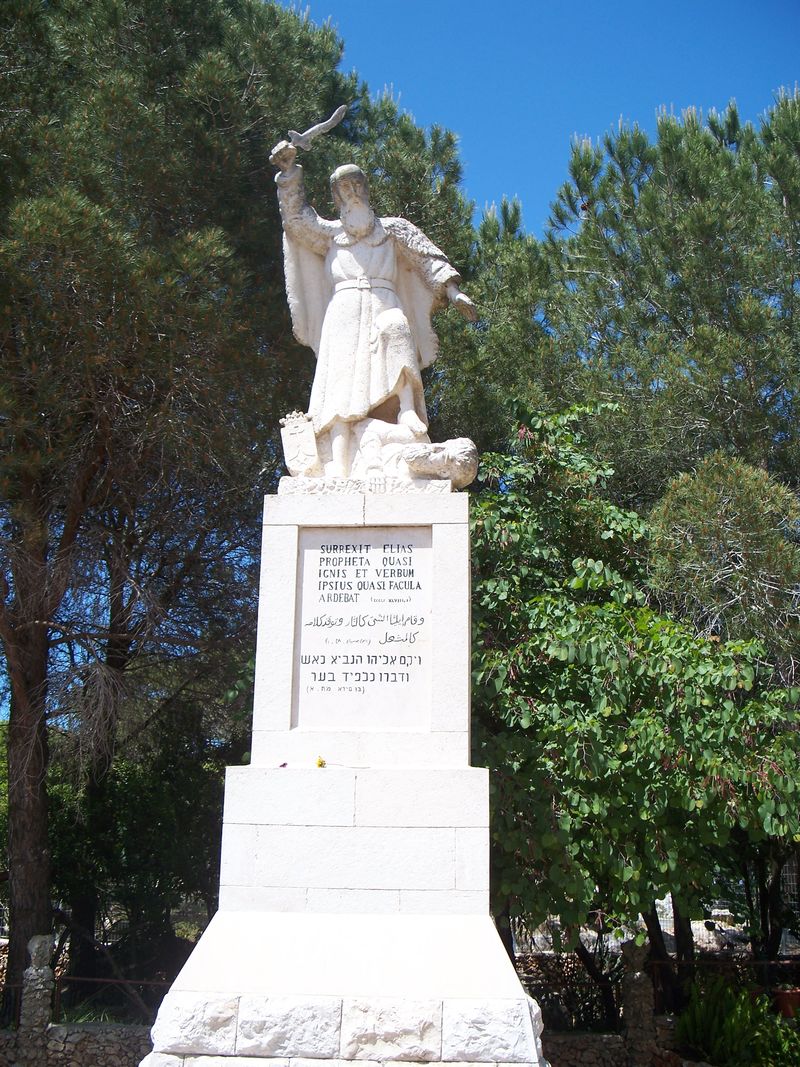 Statue of Elijah at Mt. Carmel. 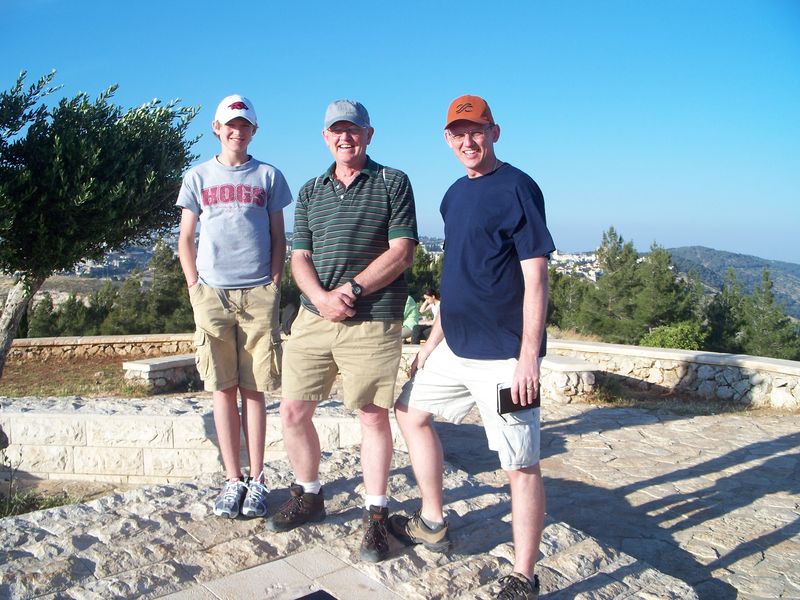 3 AM in an Israeli Hotel

We arrived in Tel Aviv last night (which was yesterday around noon in Orange Park).  Our flight was delayed for two hours in Atlanta while the maintenance crew figured out how to open a jammed interior door to the crew quarters.

Once we arrived, we collected our baggage and met Yoni Gerrish, our guide.  He has his nine year old son Evan with him for a few days on this tour.  I met Evan in 2007.  It's amazing how much a kid can grow in just a few years.

We drove about 45 minutes north of Tel Aviv to our hotel on the Mediterranean.  Nice view (well, I know it will be a nice view in the morning.)  Well, it's 3AM.  I have slept pretty well, but due to the time change, I am now awake.

This is a pretty nice hotel.  It has wi-fi, obviously and as I flip channels, here's what's on TV at 3AM in Israel:

So, late night TV in Israel isn't much different than American TV.  All these channels and nothing on.

Well, unless I can get some sleep now, tomorrow is going to be all messed up. We hit the road at 9am to Caesarea (which around here is pronounced CEE-ZER-EA, not Seh-sa-rea).  There are two Caesareas.  This is NOT Caesarea Philipi.  This is Caesarea Maritima.  This is where Paul was taken once arrested.

This Wikipedia link is pretty complete.