I showed some of the photos of our trip to Israel last night and ran out of time (again.)  I ended with one of my favorite stories of the trip and trips past.  Looking at photos of the southern excavation and steps on the southern side of the Temple area, we discussed the happenings of Acts 2.  Here Peter preached and many were saved.  Following this salvation experience, they were baptized.  The question for years has been "where?"  Archeologists have uncovered many mikvah bathing pools right on the steps of the Temple.  These ritual baths were performed by Jews during the time of Christ (as well as before and in some circles of Judaism, even today.)  These "baths" were to be done nude, in a covered area, very modest and to prepare the individual to enter into Temple worship.

One of the keys is the name in which the person was to be baptized.  We baptize today in Jesus' name.  Ever wonder why?  Watch the clip below as our guide Yoni Gerrish explains the area, the ritual baths and the amazing (even to Hebrew scholars) concept of being baptized in Jesus' name.

Our Last Day in Israel

It has been an incredible week of study and touring the Holy Land.  Our group of twenty-two have grown closer together and God has spoken to each person and to the group in special ways.  Our last day in Jerusalem started with a . to the Old City and a last chance at getting some bargains in the marketplace.  Not my favorite place to be, but fun to haggle.  Where else can you be told that an item costs $10, you get to offer $2 and settle for a price of $6 (all the while knowing that the item was worth about $1.50.)

We went to the Holocaust Memorial today.  Since I have been before, I went through the new section that highlights individual stories from camp survivors as well as videos and photos of the rise of Nazism and Hitler's "final solution."  What a sobering site.  I had to go through quickly (in about 45 minutes) but literally could have spent 8 hours or more in there watching and reading all the stories.  The rest of the group saw the other memorials.  One of the most incredible memorials is the children's memorial, financed by the Spiegal family (the ones with the catalogs) in memory of their son who died as a child in Auschwitz.  In the center of the memorial are five lit candles.  The room is covered with mirrors and the five candles reflect to 1.5 million lights representing the 1.5 million children who died during the Holocaust.

From here we visited the Israel Museum and the Shrine of the Book where the Dead Sea Scrolls are kept.

Yoni Gerrish, our guide, ended our tour with a wonderful, authentic meal at a restaurant in an Arab city on the way to Tel Aviv.

Now we're in the airport at Tel Aviv.  Time for some more airport details:

Once again, the study tour to Israel was worth it.  We will go again and I hope more of you will plan to go too.  Our next trip will take us through the wilderness and into Jordan to Petra.  It may not be so much a "hotel stay" but a couple of nights camping out.  Anyone up for this?

Shabot began last night at sundown and is almost over at this point.  Shabot means "seven" and is the Sabbath for Jews.  Our day began as others in the city with much on our schedule.

We began by going up to the Mount of Olives and spending some time in an olive grove in Gethsemane considering Jesus' last night with his disciples.  Our guide, Yoni, said that this was the busiest he has ever seen it.  It was a madhouse.  Never have I seen so many tour groups and buses.

We then went to the traditional Via Dolorosa and the stations of the cross.  Of course, we understand that this is a Crusader era creation (this road, that is) and the stations are more tradition than fact, but still a needed site to visit.  This road, too was more crowded than normal.  The shops on this way were open, because these are owned by Arabs and they do not close on Shabot as the Jews do.

We were reminded once again there are at least two of every significant site in the Old City.  These sites are often based on who owns the property.  The stations of the cross - well, for some they are very significant, but stories like Veronica and each station are not necessarily biblical, but traditional.  I don't think they take anything away from the story of the cross, but for me, they don't necessarily add anything.  Some Christian churches see these as more valuable than others.  There is talk about adding four or five more stations to this walk. Interesting.

From here we went to Bethlehem, into Palestinian controlled land, through a check point that will one day be a border more than likely, to the Shepherd's Field.  This location is owned by the YMCA and is a cave where animals were kept and families lived in the front.  This is much like what the Bible describes as the "stable" Jesus was born in.  The locals all understand that Christ was born in a cave and placed in a stone feeding trough.  Makes the traditional nativity scene seem not quite so right.  Some of the gift shops even sell nativity scenes made to look like caves.

We had lunch and went to a shop.  In this shop they had beautiful (and very expensive) olive wood carvings.  There were many nativity scenes, animals and Jesus statues.  Then I saw one on the shelf that looked familiar but I couldn't place it.  I asked Yoni who he thought it was and he didn't know.  Then the shop owner told me it was Nephi.  It all clicked.  This statue and a number of others are of Mormon characters from their history and their Book of Mormon.  I found Moroni and Joseph Smith statues everywhere.  Interesting.  (BTW - I don't agree with the Mormon teachings and the characters in the Book of Mormon are in my estimation fiction).  The shop owner isn't Mormon, but it's business and Mormon groups come there as well.  The power of the almighty shekel.

We then drove over to the Herodian, a palace built by Herod the Great.  This was where he was buried as well.

Our tour ended with a trip to an open field where, according to biblical descriptions of surrounding hills, David slew Goliath.

We're back at the hotel now and getting ready for dinner.  Following dinner, we're walking over to the Baptist church where Yoni worships to watch the congregation's talent show (and get some dessert.) 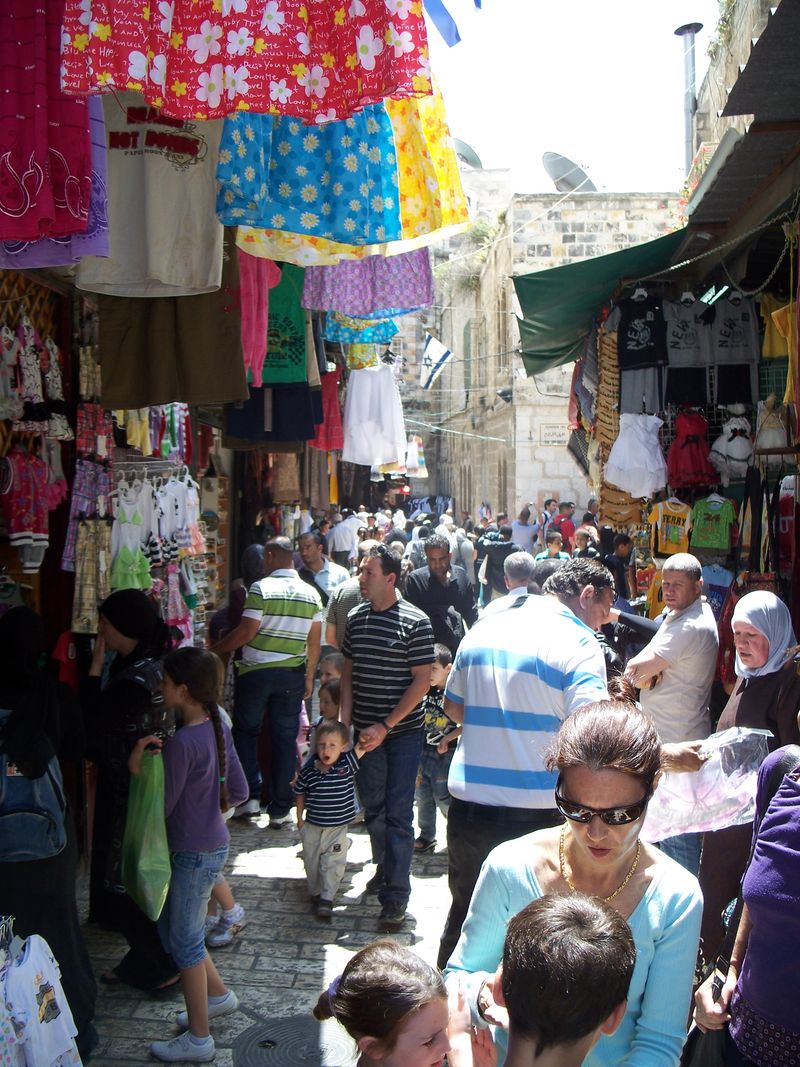