davidtarkington.com
Home Archives Subscribe
Are We There Yet?
The Egg & Other Terribly Flawed Illustrations of the Trinity

Does It Matter Which Bible Translation You Use?

We are working through a study of doctrine on Wednesday evenings titled "Foundations of Our Faith."  One of the foundational issues that we cover is the inspiration, inerrancy and worth of Scripture.  Our doctrinal statement on the Scriptures states this. . .

The Holy Bible was written by men divinely inspired and is God's revelation of Himself to man. It is a perfect treasure of divine instruction. It has God for its author, salvation for its end, and truth, without any mixture of error, for its matter. Therefore, all Scripture is totally true and trustworthy. It reveals the principles by which God judges us, and therefore is, and will remain to the end of the world, the true center of Christian union, and the supreme standard by which all human conduct, creeds, and religious opinions should be tried. All Scripture is a testimony to Christ, who is Himself the focus of divine revelation. (Baptist Faith & Message, 2000)

Every so often I will have church members and attenders ask what English translation of the Bible is best.  This is sometimes asked with a sincere desire to know which Bible to purchase and study.  Sometimes, it's a test to see if I will say the version that the questioner likes.

Regarding English translations, it seems that a new one is available just about every couple of years.  If you go to the local Christian bookstore, you will find a wall of different translations in a variety of styles and with different features.  The marketing of the Bible has become big business.

While it is still the best selling book in the United States, it may also rank as one of the least read.  However, when studying the Bible, it is wise to have a good translation in hand.

There are primarily two types of translations of the Bible available.  One is a "word for word" translation that seeks to be as literal as possible with regards to the original languages of Greek and Hebrew.  On the other end of the spectrum is the "thought for thought" versions which seek to maintain the ideas of the original texts, knowing that sometimes the original Hebrew and Greek words do not translate easily into English.

Some Bibles available aren't actually translations at all.  They are paraphrases in modern language, which are fine for personal reading to better gain a grasp of what is being said, but should never be used as one's primary Bible for study, teaching and research.

Yet, this still may not answer the question "Which translation is the best?"

Let me highlight some of the features of translations most often used by those in our faith family.

KJV - The King James Version:  Well, this is the gold standard for English translations it seems.  It's also the translation that most adult believers grew up reading.  This is a big year for the King James Version. This is the 400th anniversary of this 1611 edition.  You'll notice that on the continuum, it would be classified as mostly a "word for word" translation.  It presents beautiful language, with all the "thees" and "thous" and Old English terminology.  There is great beauty in how this version is presented and while I do not preach from this version, I believe it is a good translation.  I, however, am not one who would be a "KJV only" Christian as some are.  The old joke was "If the KJV was good enough for Paul, then it's good enough for me."  There has been and will continue to be debate among Christians about the King James Version.  The reality is the antiquated language is often difficult for new believers to understand.  Some words are no longer in use in the English language.  Then, there's the constant debate on better understanding of the original Greek texts.  Nevertheless, this posting is not to be a debate on the King James Version.  I personally do not believe it is the best or only valid translation available, but I certainly would say that if the KJV is the Bible you grew up with and you love it, then read it.  The KJV certainly has served a great role in the church for the past 400 years and we are to be thankful to God for it's availability.  (It's also a public domain translation, not owned by any one publisher, so it remains the most widely distributed version.  Just ask the Gideons.) The King James Version is presented at a 12th grade reading level.

NASB - New American Standard Bible:  Other than the Interlinear Greek/Hebrew Bible, the New American Standard is the most literal English translation on our continuum.  My first study Bible was the NASB and I love it.  While preserving the literal accuracy of the 1901 American Standard Version, the NASB has sought to render grammar and terminology in contemporary English. Special attention has been given to the rendering of verb tenses to give the English reader a rendering as close as possible to the sense of the original Greek and Hebrew texts. In 1995, the text of the NASB was updated for greater understanding and smoother reading.  It is not the easiest to read, however, and is presented at an 11th grade reading level.

ESV - English Standard Version:  This is the version I have recently begun using in my preaching and studying.  The English Standard Version stands in the classic mainstream of English Bible translations over the past half-millennium. The goal of the translators has been to carry forward this legacy for a new century.  To this end each word and phrase in the ESV has been carefully weighed against the original Hebrew, Aramaic, and Greek, to ensure the fullest accuracy and clarity and to avoid under-translating or overlooking any nuance of the original text. The words and phrases themselves grow out of the Tyndale-King James legacy, and most recently out of the RSV, with the 1971 RSV text providing the starting point for our work. Archaic language has been brought to current usage and significant corrections have been made in the translation of key texts. But throughout, the goal of translators has been to retain the depth of meaning and enduring language that have made their indelible mark on the English-speaking world and have defined the life and doctrine of the church over the last four centuries.

NIV - New International Version:  This is the most popular English Bible version other than the King James Version.  A self-governing body of fifteen biblical scholars, the Committee on Bible Translation (CBT) was formed and charged with responsibility for the version, and in 1968 the New York Bible Society (which subsequently became the International Bible Society and then Biblica) generously undertook the financial sponsorship of the project. The translation of each book was assigned to translation teams, each made up of two lead translators, two translation consultants, and a stylistic consultant where necessary. The initial translations produced by these teams were carefully scrutinized and revised by intermediate editorial committees of five biblical scholars to check them against the source texts and assess them for comprehensibility. Each edited text was then submitted to a general committee of eight to twelve members before being distributed to selected outside critics and to all members of the CBT in preparation for a final review. Samples of the translation were tested for clarity and ease of reading with pastors, students, scholars, and lay people across the full breadth of the intended audience. Perhaps no other translation has undergone a more thorough process of review and revision. From the very start, the NIV sought to bring modern Bible readers as close as possible to the experience of the very first Bible readers: providing the best possible blend of transparency to the original documents and comprehension of the original meaning in every verse. With this clarity of focus, however, came the realization that the work of translating the NIV would never be truly complete. As new discoveries were made about the biblical world and its languages, and as the norms of English usage developed and changed over time, the NIV would also need to change to hold true to its original vision.  The NIV is presented at a 7th grade reading level.

HCSB - Holman Christian Standard Bible:  This is our Southern Baptist translation and is Very good. (the updated version of this translation is the CSB.) After several years of preliminary development, Holman Bible Publishers, the oldest Bible publisher in America, assembled an international, interdenominational team of 90 scholars, all of whom were committed to biblical inerrancy. Smaller teams of editors, stylists, and proofreaders then corrected and polished the translation. Outside consultants contributed valuable suggestions from their areas of expertise. An executive team then reviewed the final manuscripts.

The HCSB uses optimal equivalence in translating. This approach seeks to combine the best features of both formal (word for word) and dynamic (thought for thought) equivalence. In the many places throughout Scripture where a word for word rendering is clearly understandable, a literal translation is used. In places where a literal rendering might be unclear, then a more dynamic translation is given. The HCSB has chosen to use the balance and beauty of optimal equivalence for a fresh translation of God's word that is both faithful to the words God inspired and "user friendly" to modern readers. This translation is presented at 7th grade reading level.

OK, these are descriptive terms about some translations.  Others are good as well such as the New King James Version and even the Revised Standard Version, but what about all the others.

GENDER NEUTRALITY IS AN ISSUE

Many newer translations have bought into the politically correct rhetoric and therefore have determined that it is better for the Bible, in an attempt to be inclusive (which it is anyway), must remove masculine references. This is a problem.

In an attempt to be all-inclusive, neutering the Bible of gender renders it watered-down and in some cases totally wrong.

While there are times when it would be appropriate to change the word "man" to "people" in a verse (only when the original text shows that to be a more reasonable translation) many of these translations have gone overboard and have sought to remove all gender.  This results in verses not saying now what the original intended, removing characteristics from God and Jesus that are essential to understanding the Word, and not being all-inclusive, but rather removing the individual need for a response to the Gospel.

So, this being said - a gender-neutral, thought for thought translation is not one that I would recommend.  Below is a chart that will show you some comparison data regarding translations. 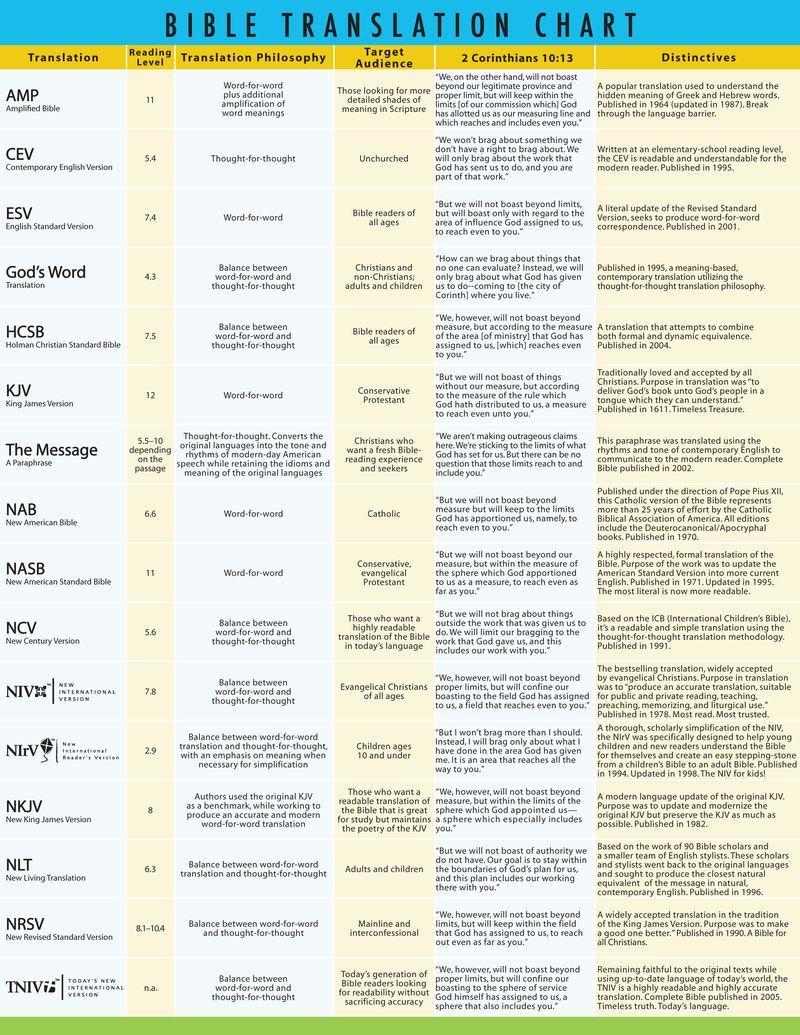 Click the chart above to open a larger version.

Does it matter which translation you use?  Yes.  I study the ESV and use that translation in my sermon preparation.  However, I like the NASB and HCSB as well.