davidtarkington.com
Home Archives Subscribe
Some Atheists Are Better "Christians" than Christians
What Are You Crying About?

Should You Observe the Stations of the Cross?

The numerous times I've led tours to Israel, we always walk down the Via Dolorosa and experience the "Stations of the Cross." It's also known as the "Way of the Cross" or simply "The Way." We watch groups coming through, many in tears. Some placing there hands on the wall or on stones where Jesus was said to have experienced different events along the road to His crucifixion.

Though it is a moving experience, thinking about Jesus' journey to Golgotha, the reality is that the road that tourists travel every day in Jerusalem is not the same road that Jesus actually traveled. TheVia Dolorosa (or the Way of Suffering) is actually under layers of rebuilt city and led in a different direction.

It's cool as long as the guides let the people know the reality of history. Yet, after watching some of the groups, I get the feeling that many guides are saying "This is the exact place where Christ walked." The reality is that the vast majority of guides aren't believers, so what do they care if a group of Christians don't get an authentic picture?

Our guide, Yoni, is a believer and a Bible scholar, as well as versed in archaelogy and historic digs. We go down the road, but it is clear that this isn't the actual road. Still, the reason we travel this road is because it is valuable to remember the journey that Christ made to Mount Calvary - a journey that His Father had prepared for Him from before the beginning of time.

The tradition of focusing upon these stations began with St. Francis of Assisi and extended throughout the Roman Catholic Church during the medieval period. Being primarily a Catholic celebration or teaching, many Baptist and evangelical churches are not familiar with the stations. (Though it should be noted that the observance is not solely Catholic. Many Lutheran, Anglican, Episcopalian, and even some Baptist and evangelical churches observe this tradition.) However, when Mel Gibson's The Passion of the Christ hit theaters, many non-Catholics were presented with the primarily Catholic tradition of the Stations. I remember some Baptist friends asking me questions about certain things in the movie that were not familiar. My Catholic neighbors at the time told me that they were pleased to see the Stations presented so clearly. They were surprised that we (Baptists) were unfamiliar with such characters as Veronica and her scene.

The Stations are most often seen as a series of fourteen pictures or sculptures depicting the following scenes:

Though not traditionally a station, many churches consider the Resurrection of Jesus a fifteenth station. 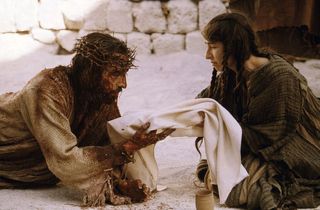 Of the traditional fourteen Stations, only eight have clear Scriptural basis. Stations 3, 4, 6, 7 and 9 are not biblically founded. Veronica, featured in Station 6, is never mentioned in Scripture. In fact, until medieval times, she's never mentioned at all. So, did she exist at all? Probably not. Tradition is a powerful thing. She is said to have offered Jesus a towel, which was used to wipe the blood from his face. This scene is shown in The Passion. She supposedly brought the towel with the image of Christ to Rome. Over the centuries, more and more traditions grew from the Veronica story. Several legends were developed.  In Italy it is said she was summoned by Emporer Tiberius and cured him by making him touch the sacred image of Christ on the towel. In France, she supposedly was given in marriage to Zacheus and then travels to Rome and then Quiercy, where Zacheus became a hermit.

Some say that the oldest and best known icons from the Holy Land, taken to Rome were called vera icon (true image), which eventually morphed into the name "Veronica." So even many Catholic scholars would say that the name of the woman on the Way was probably not named Veronica. However, they would say the act of wiping Jesus' face did happen.

Truth be told - this act is not in Scripture. Therefore, this act, as well as the other stations highlighted above, since they are not accounted for in Scripture, are most likely not part of the true account. Do they take away from the truth? I say "yes" because they're not necessary. The Stations of the Cross (if that's what you wish to call them) as described in the Gospels is complete. We must be wary and avoid at all costs adding anything to the biblical narrative.

In the past few years a new Stations of the Cross has developed. It is called the Scriptural Stations and relies on the Bible alone as guide and reference. While many evangelical churches do not follow the traditional "Holy Week" standards, on this Good Friday, the day set aside to remember and focus on Christ's sacrifice on the cross, these stations are worth remembering. (Even the current Pope and previous Pope affirm these Stations.)

These are much better than the common traditional Stations due to the biblical accuracy. 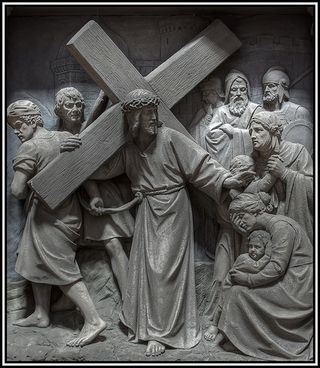 So, is observance of the Stations of the Cross wrong? It depends. Are you referencing the traditional ones or the Scriptural ones? I would not focus on the traditional, even though it may be moving and powerful, because there are portions that have no biblical basis.

Regarding the Scriptural Stations,"yes,"  if done as a time of prayer and meditation, focusing on the great sacrifice Christ made on the cross and how that sacrifice was essential to glorify the Father and rescue His children.

On this Good Friday, make sure you remember what Christ has done.

Looking forward to Resurrection Sunday. It's going to be a great time of celebration.