When a Royal Marries a Commoner 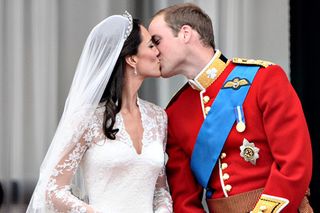 This morning all around the world, millions of people gathered in front of their television sets, computer screens or smartphones to view the wedding of a Royal to a Commoner. The vast majority of people watching this event and taken by the splendor of the wedding have absolutely no connection whatsoever to those being married. In fact, most are not even residents of the realm of this royal family.

Merchants were and are making quite a bit of money off this wedding.

This brought to mind another wedding. One that seems supernatural and almost like something from a fairy tale. It's hard to get our heads around it because, according to the story - we (Christians) are in this wedding.

In John's vision as recorded in Revelation 19, he saw and heard multitudes praising God because the wedding feast of the Lamb - literally "the marriage supper" - was about to begin. Of course, wedding customs in the days of John and other first century Middle Easterners is much different than our Western customs.

According to the description on www.gotquestions.org, there were three major parts to the wedding customs of the day. First, a marriage contract was consummated between the parents of the bride and groom. The parents of the bride would pay a dowry to the groom or his parents. This was the betrothal period. In some countries, this is still the practice today. This was actually the period that Mary and Joseph were in when she was found to be pregnant with the Son of God.

The second step normally took about a year later (so much for quick engagements.) The groom, accompanied with his friends, would go to the bride's house at midnight by torchlight and parade through the streets. The bride would know this was going to happen and would be ready with her maidens. They would then join the parade and end up at the groom's home. Jesus spoke of this in his parable of the virgins in Matthew 25. It's also a picture of the "thief in the night" coming to receive his bride.

The third step was the wedding supper. This event could go on for days. You can get a picture of this in the story of the wedding in Cana as shared in John 2.

So, back to John's vision.

In this vision, he sees a wedding feast. This was a common scene during John's day, but in this vision, the bride and groom were unique. The groom was a Royal - a King. The groom was Jesus. The bride was a commoner - His church. I have to be honest, this illustration always confused me, because I never saw myself as a bride (still have a hard time with this.) However, as I have discovered the "rescue" motif of the Gospel, and realized that we (humanity) are the ones being rescued - with our hero, Christ Himself, coming to receive us . . . just like a thief in the night . . . the story begins to resonate.

The wedding feast of the Lamb is this third phase as described above. This means that the first two phases have already happened.

Phase One was consummated on earth when we, as invidual members of the Church, the body of Christ, placed our faith and trust individually in Jesus Christ as Savior and Lord. There was a dowry paid. This dowry, paid to the groom's father (God), would be the shed blood of Jesus Christ on the cross on behalf of the Bride (that's us - remember, it's a debt we cannot pay.) Now, the Church would belong to Christ in the sense of betrothal and, lie the wise virgins in the parable, all would be watching and anticipating the return of the groom.  This is the Second Coming.

Phase Two is the rapture of the Church that will happen when He returns. The Bride (us) will be taken to the Father's house.

Phase Three, and this is the good part, is the marriage supper.

This marraige supper includs not only the Church as the Bride of Christ, but others as well. The "others" include Old Testament saints who are going to be raisd at the Second Coming. Also, the martyred dead of the Tribulation who form the "multitude" will be there.

The angel told John to write this. . .

And the angel said to me, "Write this: Blessed are those who are invited to the marriage supper of the Lamb. And he said to me, "These are the true words of God." (Revelation 19:9 ESV)

You may not have received your invitation to the wedding in London, but guess what? You've been invited to this one. . .and it's really a bigger deal.