davidtarkington.com
Home Archives Subscribe
Welcome to the Table. . .Just Don't Talk
God Loves You and Has a Wonderful Plan for Your Life

We Were All POWs

I am currently in Americus, Georgia. I am leading a group of our senior adults on a trip to some sites up here nearby. Yesterday, we left early from Orange Park and arrived a little after lunchtime at Andersonville. While some in our group have been here before, the vast majority have not.

Andersonville, Georgia is the home of the National POW Museum and a National Cemetery. If you travel on I-75 in Georgia, you may have seen the brown sign showing an exit leading toward Andersonville. If you're like most, you just drive by. Click here for the National Park Service info regarding this site.

Andersonville is not close to the interstate. It's a bit of a drive.

So, why did the federal government put the National POW Museum so far off the beaten path? 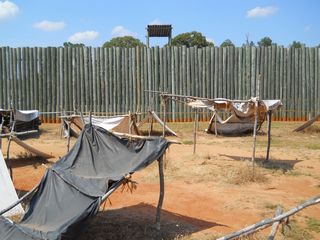 Andersonville is the home of formerly named Camp Sumter - the largest Civil War era POW facility in the nation. In this Confederate camp, that existed for only 14 months, over 43,000 Union soldiers were confined. Of these, almost 13,000 died from disease, poor sanitation, malnutrition, overcrowding, and exposure to the elements. The camp was not a prison as many would imagine, but an open air 26 1/2 acre stockade with a 16 foot log wall surrounding. While the walls no longer exist, a portion of the stockade has been recreated to help visitors imagine the setting. Today, it's a grassy hill with a few large trees growing in one corner, complete with monuments from northern states commemorating their war dead. At the time the prison was active, there was no grass, just red clay and sandy ground with a trickling stream running through the middle (which was the only source of water, and also served as the public toilets.)

In 1970 the legislature established Andersonville as a National Historic Site. The goal was to create at the park a museum that would "interpret the role of prisoners-of-war camps in history" and "to commemorate the sacrifice of Americans who lost their lives in such camps." This museum is wonderfully designed and takes the visitor through the plight of POWs in various wars, from the Revolutionary War to Operation Desert Storm (expansion to cover stories from current wars is in the works.) The features of this museum are interactive and very emotional. 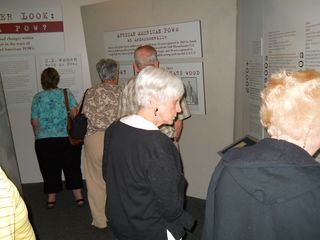 As we walked through the museum, toured the prison grounds and the National Cemetery, the sobering reality of the depravity of man is very clear. I heard some of our seniors saying things like "It's hard to believe that man can do this to other men."

We discussed how this relates to the larger story. In a sense, every person on the planet is a POW, being held by the Enemy in a prison of sin as the great spiritual battle continues. The sad thing is that most do not even realize they're being held prisoner. Once a person surrenders to the Lordship of Jesus Christ and accepts Him and his substitutionary atonement, he/she is rescued from prison and set free (see Galatians 1.) This is true liberty.

In the museum, there are a couple of short films shown. One titled "Echoes of Captivity" we have shown at our church in the past. Yet, every time I view it, I tear up. The personal stories of men (and one woman) who have served in the American military and have been held captive (some for almost a decade) as prisoners-of-war are incredibly moving. Perhaps the most moving portion of the film is when the former POWs describe the day they were liberated. Some are sharing of an event that took place decades earliers, but the tears start flowing.

These reunion stories of former prisoners and family are incredible. The joy that is described is overwhelming. The images of these men (and woman) stepping out of planes to be greeted by spouses and children will bring a tear to one's eye. 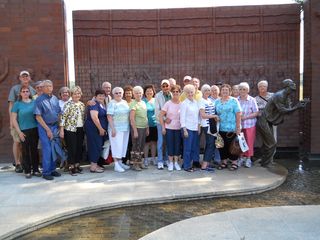 We are reminded as believers that heaven rejoices when one soul is saved. I think perhaps this rejoicing resembles these images somewhat (but on a much larger scale.) The rejoicing that takes place when a child who has been held, unknowingly, as a POW in the real battle is liberated and set free. Now, that will bring a tear of joy to your eye. . .or at least it should.

So, this started as a trip to a historic site and has become a great illustration of God's great love for us. I guess it's true. . . everything's spiritual.