davidtarkington.com
Home Archives Subscribe
Can a Church Minister to Homosexuals Without Condoning Homosexuality?
Why Seeker Sensitivity Misses the Mark

Time to Bring Back the PPV!

I was on Facebook today and an old friend's chat box popped up. We reminisced for a few minutes and began talking about our evening of cruising through the community in the PPV.

What? You don't know what a PPV is?

It's possibly one of the greatest inventions of the 1970s and was billed as an answer to the oil crisis.

My friend had one in storage in another city and finally had it moved to Fort Worth.

That's right - the PPV is the "People Powered Vehicle." 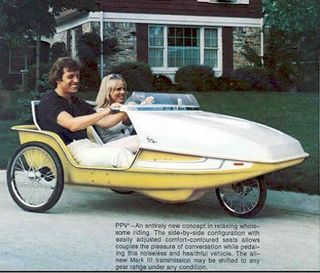 It's pedal powered and sits two people. Manufactured by EVI of Sterling Heights, Michigan, it sold for less than $400.The advertisement here states that it's perfect for couples and has comfortable contoured seats. In reality, it's a two-seat tricycle with plastic seats. . .and we weren't a couple.

We rode it once. It was late at night and we were riding throughout his neighborhood. Then, we heard a buzzing sound. We had run into a mosquito-spraying truck from the city and now, our pedaling had to increase as we held our breath so as not to inhale too much of the bug spray.

My son is 15 and I'm thinking maybe I need to search eBay and find him a PPV for his first vehicle. I think it's time for the PPV to come back. It's "green" and affordable. It also forces you to make friends, because pedaling alone is not easy.

Oh, by the way, after that one ride in the PPV, the ancient chain broke. Never again did I get to experience the fun of the PPV. :-(