davidtarkington.com
Home Archives Subscribe
Are Short Term Mission Trips a Waste of Time and Money?
It Was Like Looking Into the Future

Black Or White, But Red All Over - Interracial Marriage In the Church

A number of years ago a couple came to me to discuss a concern they had. It appeared that their adult daughter had begun to friend and hang out with brothers and sisters of the darker hue (i.e. she's a white lady with black friends.) The concern in their mind was the possibility that she might begin dating a man with darker pigmentation than her's. The parents were seeking my opinion and biblical grounds for their concerns. In other words, they wanted me to give them biblical ammunition to use on their daughter regarding this situation.

It seemed that they had done some research before arriving because the first statement was "I think I know what you're going to say, but let me ask this anyway. . ."

They were right. They knew exactly what I was going to say. They didn't like it.

This issue of interracial dating and marriage is trending in the news now due to a decision by a Kentucky church to ban membership and worship participation for interracial couples. So as not to misspeak regarding this church's stand, here's a copy of the recommendation as obtained by television station WYMT:

That the Gulanre Freewill Baptist Church does not condone interracial marriage. Parties of such marriages will not be received as members, nor will they be used in worship services and other church functions, with the exception being funerals. All are welcome to our public worship services. This recommendation is not intended to judge the salvation of anyone, but is intended to promote greater unity among the church body and the community we serve.  (Full story here.) 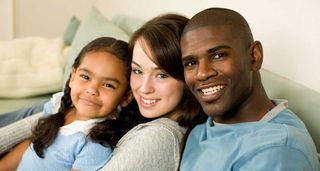 While I wish I could say this story surprises me, unfortunately it does not.  I had just hoped that we had grown more from our days of segregation and racial separation. Yet, it appears, we still have far to go.

I have always found it interesting that people tend to grimace when a black person is married to a white person, but any other mix is not seen as such a big deal. You know, if a black or white person is married to a Hispanic or Asian or even Native American, or if any of the said races (and there are more) intermarry, it doesn't seem to cause a problem. Yet, if the two extremes - say, a very dark skinned person marries a very fair skinned person, it's an issue.

Some may ask what my opinion is regarding interracial dating and marriage. I want to be very clear here. IT IS NOT A SIN.

I even had someone years ago ask "But what if your son or daughter were dating someone of another race?" I responded with "What?" and expressed that my views do not differ in this area and I do not have a NIMBY view of interracial dating or marriage.

My statement has always been and will be that my approval of my children's dates and future spouses has to do with their faith and not their skin tone. Yes, I will not approve of my children dating or marrying a person who is not a born again child of God.

Many people who wish to use Scripture as their prooftext that interracial marriage is sinful will quote Deuteronomy 7:3 (ESV) which states:

You shall not intermarry with them, giving your daughters to their sons or taking their daughters for your sons.

Every verse is Holy Spirit inspired and God-breathed. Therefore this passage is absolutely correct and true. However, there is always danger in taking a verse out of context and building a belief system out of it. This is the practice of religious cults. So, with that, what does this passage mean?

This verse is a command to the Israelites, God's chosen people, regarding their relatinship with the inhabitants of the Promised Land. There are also many other Old Testament passages that warned the Israelites not to intermarry with the inhabitants of the land of Canaan. While some see this as a racial issue, I disagree. I believe it was solely a religious and faith issue. The admonition was for God followers not to marry non-God followers, or idolaters. It had nothing to do with skin color. It was fully a matter regarding the people of the land (the Canaanites) and their worship of false gods and practicing immoral and evil reglious acts.

This admonition was echoed in the New Testament, of course, now referencing Christians rather than the Israelites. Paul addresses this with the church in Corinth.

Do not be unequally yoked with unbelievers. For what partnership has righteousness with lawlessness? Or what fellowship has light with darkness? 2 Corinthians 6:14 (ESV)

It's pretty obvious this verse has nothing to do with race or skin color. It does, however, clearly state what we as believers are to know regarding relationships. Besides numerous biblical passages that affirm that marriage is only to be between one man and one woman, the key understanding is that believers are to marry believers. In fact, I believe that believers should only date (if you believe dating is a viable option) or court other believers and, in fact, only those whom they could envision marrying.

Simply put, our relationships are to honor God.

Being unequally yoked with non-believers is not solely referring to marriage, but it most certainly includes marriage.

This passage is also not an instruction to sequester oneself from the world. We are still to be fulfilling the Great Commission as we go. But, I digress.

So, whether your skin is black, brown, red, white, tan, yellow, dark, light, etc. is not the point. It's not the determining factor. What should be the determining factor (besides being in love and praying through the relationship) is that both the man and woman are "red all over" meaning each is a child of God (and this is a churchy term, but I hope you understand) covered by the saving blood of Jesus Christ.

Somewhere along the line, many in America have come to believe that biblical characters were all white (and spoke with British accents.) It shocks some to realize that biblical heroes like Moses didn't look like their Hollywood portrayers (even though I still tend to picture Charlton Heston.) What's even more shocking, and was to the couple I referenced at the beginning of this post, was that Moses' wife Zipporah was likely black (or dark brown) skinned.

I've even heard some scholars postulate that Bathsheba and the Queen of Sheba were black.

The Ethiopans mentioned in Scipture were most likely dark skinned.

Simeon, called Niger, in Acts 13:1 may also have been black.

It's pretty safe to say that most likely very few characters in Scripture were light skinned in that most were "Semitic," light or dark brown in complexion. Why this surprises us, I don't know. The stories did take place in the Middle East. Maybe it's because we tend to make God in our image rather than remembering it's the other way around.

It is interesting that the Bible does not speak about skin tone much and when it does, it's not a major point. Perhaps that's the message we have forgotten. God's message of grace and salvation is for all people of all races and skin tones.

To try to build a theology of race based on upon Scripture is nothing more than sinful racism. That, my friend, has no place in the Kingdom of God.