Are We Engaging This World for the Gospel or Just Gathering for Services? 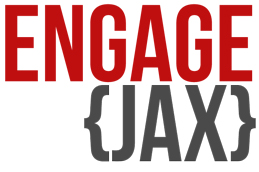 About five months ago, I attended a church planting conference with Vision360. It was here that I was introduced to the term "domain engagement." The term was new, but the concept was not. I have been speaking of "being the church" in the world, wherever God has placed us. The concept of domains in life is not new. Wherever an individual finds their greatest influence, be it in school or at work, is the domain where they are most heavily connected.

On Sunday evening, September 9 from 5:30pm to 8:30pm, we will be hosting here at First Baptist Church of Orange Park, the annual EngageJax Conference. This annual conference is sponsored by the network of churches in the Jacksonville Baptist Association. This year, the focus is "Domain Engagement."

I believe this concept is key to winning this city and community for Christ. I do not believe that winning a city is impossible, nor even improbable, if the church steps fully into the story which God has already put in place.

Mark your calendars and get your child-care secured (there's no child-care available at the church this evening) and plan to join up to 200 other churches this evening.

Leading us in worship this evening will be Ascension Worship. This group of worshippers from various Jacksonville-area churches, are gifted and anointed by God. The worship is fresh and worthy of the One who is our audience. Below is a clip of a recent worship experience led by Ascension at Journey Church.

Our guest speaker this evening will be Bob Roberts, Sr. Pastor of NorthWood Church in Keller, Texas and Chief Visionary Officer of Vision360. For a better description of how the church must embrace domain engagement, watch Bob in the video below.

Bob said something at the conference I attended that still rings in my mind. He said "We say we are planting churches, but I fear that we are just planting worship services." There is a difference.

The event on September 9 is three hours long. There will be breakout sessions regarding different domains. I hope the church that is First Baptist Orange Park will gather together this evening.

Thank God for the ACLU

**Disclaimer** Since most people will not read the entire post, I'll state here that I disagree with the ACLU and what they stand for. Now, read the rest of the post.

There are certain groups and things that when brought up in conversation with Christ-followers cause great discomfort and sometimes anger. These are things that many conservative, American, evangelical Christians deem as evil or "of the devil."

One such topic, which is the bane for Christians and even many who are far from God, but politically identify themselves as socially conservative is the ACLU.

The American Civil Liberties Union (ACLU) describes itself as the guardian of our nation's liberty.

Most Christ-followers identify the ACLU as the group that fights to keep any semblance of Christianity out of public life under the guise of Constitutional freedom. It's a cultural battle, no doubt, with distinct battle lines. 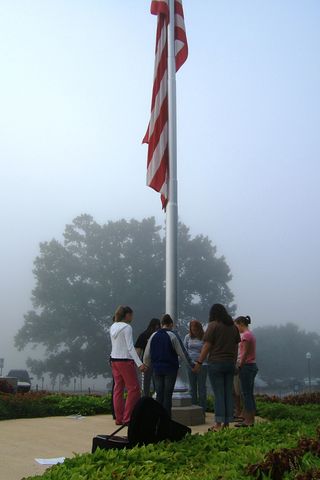 Other groups, similar to the ACLU have formed throughout the years. The one uniting factor among such groups is their disdain for the teachings of Christianity, especially in a public forum.

Perhaps the greatest tool in these groups' arsenal is their threat of litigation. Just the threat keeps many organizations from pushing back.

The purpose and the majority of work done by the ACLU and like organizations is, in my opinion, wrong and bad for our nation and its citizens. Nevertheless, I say "thank God for the ACLU" for what has developed in student ministry over the years and what is still come.

Let me use the annual global day of student prayer as an example. This day, known as "See You at the Pole," was birthed by a youth group at at DiscipleNow Weekend in Burleson, Texas over twenty years ago. As the group was convicted about their lack of witness and prayer for fellow students on their school campuses, they agreed to gather for prayer at the beginning of the school year to pray on their campus for the students, administrators and employees on the campus.

They discovered that in America, the one common element on all campuses was the flagpole. So, what some have deemed as a patriotic display (because it happens at the flagpole) was simply a gathering for prayer.

It shortly grew from one youth group at one school in Burleson to students gathering throughout Texas, then eventually nationally and now globally.

The first few years were tenuous. In many instances, students were made fun of, mocked, and even bullied. I remember seeing the clip of one student standing at the pole early in the morning, praying for her campus. She was all alone. No one else showed up. She remained and prayed. It was a powerful reminder that even alone, we're not really alone.

There were legal pushbacks as well as threats and actions came from organizations such as the ACLU.

The Supreme Court eventually ruled that these were legal gatherings, if done in accordance with the Student Bill of Rights. The law is clear that if such events were student-led, they were legal.

On the surface, it seemed the ACLU and other organizations had won a battle when adults, youth pastors, parents, teachers and administrators were barred from leading and participating in such a prayer rally on the campuses across America. I'm sure that many Christ-followers felt this was a loss.

Apparently many, even devout Christ-followers forgot about the sovereignty of God works. Funny.

I truly believe God used these organizations to release the church into the greatest mission field in our nation - the junior high, middle school and high school campuses. The "church released" is what some incorrectly identify as the "church of tomorrow." (I hate that designation, by the way.)

Teenage followers of Christ are not the "church of tomorrow." They are the CHURCH OF TODAY and have the same Holy Spirit within them, empowering them to impact this globe for the sake of Christ.

However, with adults being "forced" to step back, it forced students to step up. No longer could students gather at the pole, then wait for their youth pastor, pastor, parent, a teacher or another adult to lead the gathering.

This is true in other areas as well.

So, thank God for the ACLU. Despite the many things that frustrate, anger and challenge the Christian community in America, in this case, an intentional move to remove Christian influence from public life actually spurred the church (meaning the teenage Christ-followers) to step up and lead. Students leading in prayer. Students leading Bible clubs. Students leading their friends to Christ.

This is the church released. What an incredible, untapped power. May this be the year our campuses are teeming with missionaries (students) and God reign supreme. May we experience a move of the Spirit unlike anything we have ever seen in our lifetime.

For more information on See You at the Pole (September 26 this year) go to www.syatp.com. We encourage our students to gather 30 minutes before school on their respective campuses. No, our youth workers and pastors will not gather with them, but we will be praying. Our homeschool students will gather here at the church, at our flagpole (and yes, adults can join these students) on that day at 9am.

Click here for details on what adults can do at SYATP and scroll down on the link for details on the Students Bill of Rights on the Public School Campus.