davidtarkington.com
Home Archives Subscribe
"C'Mon Man" - You Don't Have to Live Defeated
A Perspective on the Missile Strikes from Inside Israel

Dick Hoyt was born in 1940. He is now a retired Lieutenant Colonel in the Air National Guard. In 1962, Dick and his wife Judy were blessed with a child. They named the child Rick. However, at birth it was discovered that the umbilical cord was wrapped around his neck. The loss of oxygen to the brain left Rick with cerebral palsy. As a result his brain cannot send the correct messages to his muscles. 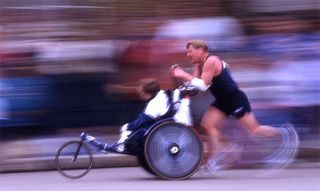 Doctors encouraged the Hoyts to institutionalize Rick. They informed them that Rick would be nothing more than a vegetable for the remainder of his life. His parents held onto the fact that their son’s eyes would follow them around the room. This gave them hope that he would somehow be able to communicate someday. The Hoyts received help from specialists at Children’s Hospital in Boston. A doctor there encouraged them to treat Rick like any other child. They did and Rick began to show progress.

At age 11, after some persistence from his parents, Rick was fitted with a computer than enabled him to communicate. It was clear that Rick was highly intelligent. Rick attended public school and eventually graduated from Boston University with a degree in special education.

It was in 1977 when Rick became inspired by an article on racing he saw in a magazine. Dick Hoyt was no runner and was nearly 37 years old, but he committed to start training so that he could take Rick out for a run. They entered a race and afterward, Rick said, “Dad, when I’m running, it feels like I’m not handicapped.” After their initial five mile run, Dick continued to train. He would train with a bag of cement in a wheelbarrow while Rick was in school. Together they “ran.” Rick in his specially fitted wheelchair. Dick behind him, pushing.

As of November 2011, Team Hoyt has competed in 1069 endurance events, including 69 marathons and six Ironman triathlons.  They had run the Boston Marathon 29 times. In 1992, they ran across the United States in just 45 days. Rick turned 50 in 2012 and Dick turned 72. They continue to run and do so together.

The world said to the Hoyts – there’s nothing you can do. These men rejected that passive response, and with the strong love of a father and a reliance on each other, they have become examples for many.