A few weeks ago I traveled to Toronto with Neil Jimenez and some leaders from the Jacksonville Baptist Association for the purpose of meeting with church planters and missionaries in the region. The North American Mission Board has designated Toronto as a "SEND CITY."

It's been said, and proven over time, that if you reach the cities in a nation, you will reach the nation.

Over 83 percent of the population now lives in metropolitan areas. The major population centers in North America are vital mission fields for Kingdom growth and influence.

NAMB has prioritized its work in 50 cities throughout North America. The map below shows the initial 30 cities where work is being channeled. Toronto is one of these cities. 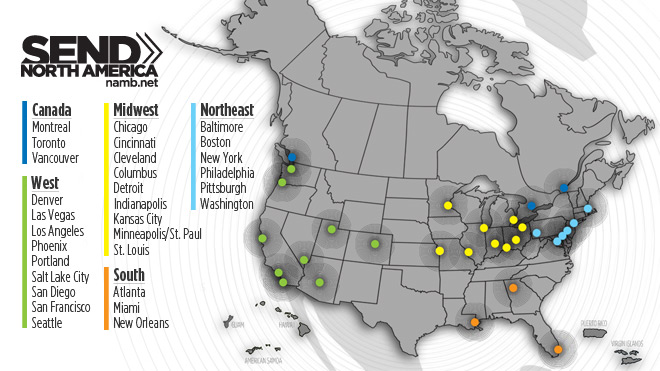 Our church is strategically positioning to work in two SEND Cities (Toronto and Portland, Oregon) for the next few years.

There is great need there, but also many things we can learn from the missionaries and church planters serving in this city. With Toronto's increasing international and Muslim population, insights into connecting and reaching these people is invaluable for us.

Jacksonville has been designated a sanctuary city by the US State Department and consequently, our international population is growing substantially. Jacksonville now has areas known as "Little Baghdad" and other monikers which are descriptive of the heritage of those moving in our area.

This will be a partnership that will increase the Kingdom of God, both here in Orange Park and Jacksonville, but also in Toronto and surrounding areas.

There are over 6 million people in Toronto and surrounding areas, with 4.2 million in the metro area. Currently, there is one SBC church for every 167,000 metro Toronto residents. The CNBC (Canadian National Baptist Convention) and NAMB have a strategic plan in place to break through the darkness with the Light of Christ. An essential part of this plan is church planting.

The basic needs right now for this region are Prayer, People & Provision. We desire to be a provider of all three Ps.