davidtarkington.com
Home Archives Subscribe
The Problem with a Good Idea
Celebrating the Darkest Day in History

What the Gay Marriage Debate Is Really About

Everyone's talking about it. Facebook and Twitter are being inundated with status updates relating to it. The pink and red equal sign is showing up everywhere. Late night talk show hosts are using the story as fodder for their monologues. I cannot open a newsfeed, news app, turn on the news or listen on the radio without hearing debates about it. 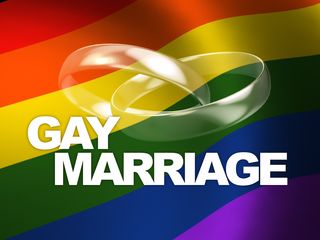 Adults and teenagers are marching and defending this "right." Students have shifted from spending their spring break on the beach to joining others in Washington DC for this "momentous occasion." Some from our own schools are in DC for this today.

In fact, if you speak against the topic of the week, you are immediately demonized and labeled a bigot or hater.

Gay marriage is the topic of the week . . . and regardless what the Supreme Court says, it will remain the topic for years to come. The gay marriage debate has been destined to happen in this country for decades.

It is an orchestrated battle, and not one developed by a group of LGBT lawyers and advocates. This is a spiritual battle and it's become apparent that we (the church) may not know how to fight it. We have fought a spiritual battle with physical means. . .and we're losing.

The battle for gay rights and gay marriage has been strategically wrapped in terms such as "love," "equality," "rights," etc. This strategy is so well thought out that anyone opposed to the lifestyle is then labeled as close-minded and a bigot since they're against love, equality, rights, etc.

Pastor Dean Inserra of City Church, Tallahassee recently blogged about the real issue. I echo what he is saying here:

The greatest example of this that we see in Scripture is the visible portrait of marriage, a covenant between a husband and a wife. This points us to the invisible reality of the relationship between Christ and the Church.

“For this reason a man will leave his father and mother and be joined to his wife, and the two will become one flesh. This mystery is profound, but I am talking about Christ and the church. To sum up, each one of you is to love his wife as himself, and the wife is to respect her husband.” (Ephesians 5:31-33 HCSB)

When God created Adam and Eve, male and female, husband and wife, the gospel was not just on His mind, it was fully in play. Gender, and marriage are about the gospel. This is why we must be courageous in talking about divorce, adultery, and any sex outside of marriage. Anything that is not God’s design of a husband and a wife, in a life-long, monogamous relationship, is a gospel issue. The sexual union between a husband and a wife points us to the ultimate union between Christ and the Church. I officiate a lot of weddings, and I always make it very clear to the bride and groom that their specific gender roles and responsibilities are not cultural, they are designed by God, to point us to the gospel. (Read the full posting here.)

The issue is the gospel.

It seems that many churches and believers are silent on the issue of homosexuality and gay marriage in particular. Those that do speak out often do so in anger and frustration and perpetuate an image that does more to harm the cause of Christ than push it forward.

I have read numerous articles and books as well as listened to many pastors and leaders speak on the defense of traditional marriage. I believe in the fidelity of the marriage relationship as defined in Scripture being between one man (born a man) and one woman (born a woman) for life. I believe that a cultural redefinition of marriage (which, by the way, has already happened in our culture, regardless what SCOTUS determines) is dangerous and a significant mistake. To use a simpler term, it is a sin. It's just that I believe to build the debate on the defense of traditional marriage is like having cancer and taking an aspirin to defeat it. There's a bigger issue at hand.

God is God and could have used any institution or portrait He desired to point us to the invisible reality of His plan for redemption. In His sovereign and creative power, He intentionally chose the relationship between a man and a woman, as husband and wife. God did not point to a brother and sister, mother and child, best friends, or boss and employee. He gave us marriage, male and female He created them. If we cave in on this, we cave in on the entire message of God’s redemption. This is not about America, or family values. The homosexual conversation is one about the gospel. Thankfully, this gospel is available to all of us, and the marriage institution is the model God has given us to understand it. We will be more compassionate when the gospel is our motivation, not political advancement or winning a debate.

When we discuss marriage, let’s discuss Christ. That was the whole point from the beginning. (Dean Inserra)

Remember, it's about the gospel.