Homosexuality and the Church, Part 1: Are Gay People "Born That Way?"

The LGBT movement in our nation, and the world, for that matter moves forward with the mantra "We are born this way." I can almost hear Lady Gaga singing it now (sounds just like a Madonna song.)

A recent Gallup Poll shows that a record number of Americans now view homosexuality as morally acceptable and believe that sexual orientation is defined at birth.

Fifty-nine percent of U.S. adults say gay and lesbian relations are morally acceptable while 38 percent say they are morally wrong, according to the poll conducted May 2-7 among 1,535 adults. The 59 percent is an increase from 54 percent last year and 49 percent in 2009, when the upward trend began. The trend is a dramatic reversal from 2004, a year in which 13 states passed constitutional amendments defining marriage as between a man and a woman. That year, only 42 percent said such relations were morally acceptable and 54 percent said they were morally wrong.

On the question of homosexuality's origins, 47 percent say "being gay or lesbian" is "something a person is born with" while 33 percent say it is "due to factors such as upbringing and environment." Both numbers are records. The percentage of people who believe homosexuality is present at birth has increased or remained steady since 2009 when the upward trend began and a plurality of Americans (42 percent) said it was due to upbringing/environment and 35 percent said it was something with which people are born.[i]

Statistics are one thing, but what about this concept of being born gay? Is it possible? According to the "born that way" argument, a sexual orientation is a part of a person's core identity, so such a homosexually oriented person must be accepted as expressing his or her own true, created nature. But, there are problems that undermine this argument even if a “gay gene” were discovered tomorrow. Science – in spite of what many people assume – is inherently limited in what it can tell us. Science describes the world and tells us “what is,” but cannot tell us “what ought to be.”[ii]

This statement about the role of science is vital. 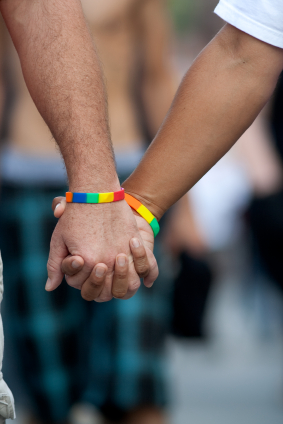 As for the “gay gene,” the concept that people are born with a gay orientation first hit the mainstream in 1991 when openly gay researcher named Simon LeVay studied the brains of thirty-five cadavers presumed to be of homosexual men. The study focused on a small cluster of neurons in the brain, called the hypothalamus.

He discovered small differences in this area of brain matter. The media and activists grabbed hold of his findings and declared the discovery of the “gay gene.” However, it should be noted that not even Dr. LeVey believe he had proven what was being attributed to him.

He stated, “It’s important to stress what I didn’t find. I did not prove that homosexuality is genetic, or find a genetic cause for being gay. I didn’t show that gay men are born that way, the most common mistake people make in interpreting my work.”[iii]

Other studies, such as one in 1993 by geneticist Dean Hamer of the National Cancer Institute attempted to affirm the “born that way” belief. Hamer, also a gay man, had his study shared via the press stating that his study was further evidence of a genetically defined gay marker. However, when two other researchers attempted to replicate the study, the findings were quite different.[iv]

Are people “born gay?” While the movement of acceptance says “Absolutely, YES!” research and biblical teaching states otherwise. Nevertheless, there is a sense that those who claim to be LGBT are in truth “born that way.” Not born LGBT, but like all humanity, born into sin. Of course, the push back from the culture is strong when homosexuality is equated to sin. The normalization of homosexuality in our society leaves those who attempt to stand firmly on the Word of God, in love, being labeled as “haters” or “un-Christian.” It’s in the intolerance in the name of tolerance that we find ourselves.

To even the casual observer, and made evident by the recent Gallup study, the normalization of homosexuality and the marginalization of an inerrant biblical stance on the issue is growing. This is not without a strategy. In other words, this hasn’t “just happened.”

More on that strategy tomorrow.

As for today’s question: “Are gay people just born that way?” into sin? Yes. Just like everyone else. Into an unchangeable and God-ordained lifestyle of same-sex attraction and action? No. That is a choice. Often it is exacerbated by stressful upbringing and familial relations. Sometimes it is affected by the unfortunate and tragic experience of abuse. Regardless, it remains a choice. All sin is a choice. No sin is worse than another. Sin is our nature and default setting. That is why we need a Savior.

Many have bought the “born this way” lie and life a lifestyle far from God and with little hope.

I’m reminded of the story of Christopher Yuan. This young man is an author and teaches at Moody Bible Institute. He speaks internationally on the subject of sexuality from his personal story of coming out of the gay lifestyle. Check out his website at www.christopheryuan.com and his book Out of a Far Country for more on his incredible journey to God. This resource and others are featured in my online bookstore, accessible here and in the side menu of the blog.

There is an Answer.

It’s not religious talk. It’s not easy. It’s not a strategy of “pray the gay away.” It’s about surrender. It’s a step of faith and trust.

If we confess our sins, he is faithful and just to forgive us our sins and to cleanse us from all unrighteousness. 1 John 1:9 (ESV)