Redemption Stories: Crissy Moran - In Her Own Words

Yesterday, we had the privilege of hosting Crissy Moran at our church. Her's is a story of redemption. 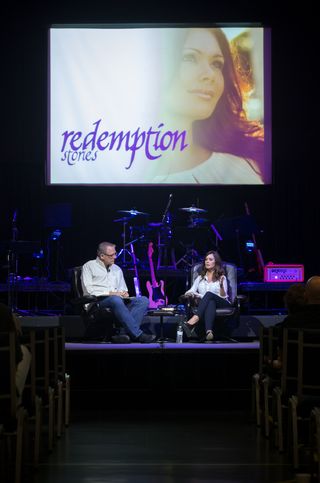 Soon we will upload video of her testimony. Before we gathered yesterday, I had sent Crissy a list of some of the questions I would ask. Here are her responses:

Tell us about your childhood. . .

I lived with my mom and dad until I was around 11 years old when they divorced.  It was very difficult for me, my mom and my brother because my dad was an abusive alcoholic.  I was actually happy they divorced because it was so chaotic at home.  However, while my parents were still together, and I was just 11 years old, I decided to follow Jesus and I was baptized shortly after.

My dad would drink and yet, still teach the Bible to us. It was very confusing to me.

I was sexually abused by a man in our neighborhood when I was just 4 years old.  Throughout my childhood it seemed I attracted older men who looked at me in perverted ways and boys who would try to have sex with me. My dad had an obsession with my sexuality and would always tell me I would stay a virgin until I got married. He would brag about that to all his drunk friends.

I was very confused about sex and religion but I think God gave me a strong sense of discernment so I when my dad would talk about things that seemed a little off I would know it.

My mom was very protective of my brother and I during their marriage.  After my mom remarried I moved in with her and our family dynamic changed.

Tell us about your teenage years. . .

I was very introverted and didn't feel I got the attention I wanted or needed and felt very isolated, depressed and alone. I realized in high school that having a boyfriend gave me validation and filled the empty void in my heart. I became sexually active with my new boyfriend and became pregnant the summer before my senior year in high school. I was actually excited to start a family of my own. Though my boyfriend had always said he'd marry me if I became pregnant, when it happened, he decided not to marry me and took me to have an abortion.  That was one of the most traumatic things to ever happen in my life.

In high school I tried to fit in with others and had friends at different points but after I had the abortion it got around school and it seemed that during my senior year of high school, I had no friends. My dad disappeared for years at a time and I wouldn't hear from him. I didn't feel stable and spent a lot of time daydreaming, listening to music in my room and being rebellious towards my mom and stepdad.

What would you say to teenage girls today?

Don't put all of your value into what boys think about you.  You don't have to have a boyfriend to be worthy of love.

It seems it was like once you were drawn into the industry, it was a whirlwind.

It WAS a whirlwind. The fact that people thought I was good enough that they would pay to shoot me filled the same empty place in my heart that the men did. I was an empty shell.

The internet and mobile devices make it so easily accessible.

These are called “Redemption Stories” and yours is still being written. What would you say to young women who are not having their heart question answered, maybe dealing with tough home lives, looking for love, etc?

Well, for me, I was looking for love in all the wrong places. Don't do what I did. Keep your dignity. The reason I share my story is in hopes that it will help steer others away from these things. That empty places in your heart was intended to be filled by Jesus and nothing else will satisfy you more. It says in the Bible that you will find HIM when you seek HIM with ALL of you heart.  Trust me nothing is better.

What would you say to men?

The video of our extended interview will be available soon. Check back for updates.

Just as a reminder, there are numerous websites, Twitter & Facebook accounts on the web. She does not own most of these. They continue to sell and take advantage of the former Crissy Moran.

She has the following official sites. These are the only official "new" Crissy sites (and safe for the family)