davidtarkington.com
Home Archives Subscribe
Redemption Stories: Crissy Moran - In Her Own Words
When Your Child Comes Out of the Closet

Only the Church Calls It Homosexuality

In a video from "The Nines" by Leadership Network, Pastor John Burke of Gateway Community Church in Austin, Texas is sharing about the church's call to minister to and love those in the homosexual community. This short video segment features Amy, one of the members of Gateway Church. The clip is featured under the subject "Too Hot To Handle."

As the clip begins, John says, "I'm going to talk about homosexuality in the church." At that point, Amy interrupts and says, "OK, hang on a minute. So, let's not use the word 'homosexuality.' 'Homosexuality' is a word that only the church uses. Let's stay with gay, lesbian. . ."

Hmmm, never thought of that. Now, while some will get all up in arms about the word, there is truth to that. The culture shift has been quick and defined, and the church does seem to be the only one using the term "homosexuality" when describing the issue. Is this a big deal? Not really, but it does give insight into the cultural understanding of same sex attraction and gender confusion. 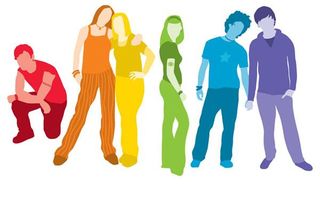 So, the correct term is LGBT or LGBTQ. Just in case, here's what it means (taken from a pamphlet by Kim Stanley, M.A.):

L stands for lesbians – women whose primary emotional, romantic, sexual, or affectional attractions are to other women.

G stands for gay men – men whose primary emotional, romantic, sexual, or affectional attractions are to other men.

B stands for bisexuals – men or women whose primary emotional, romantic, sexual, or affectional attractions are to both women and men.

T stands for transgendered – a broad term that includes cross-dressers, transsexuals, and people who live substantial portions of their lives as other than their birth gender. A transgendered person is someone whose gender identity and/or expression differ from conventional expectations for their physical birth sex. Gender identity refers to the internal sense of being male or female, while gender expression refers to how someone presents his or her gender to the world through style of dress, mannerisms, and so on. A transitioning transgender person is one who is modifying her or his physical characteristics and manner of expression to – in effect –satisfy the standards for membership in another gender. Transgender people can be straight, gay, lesbian or bisexual.

Q stands for questioning – someone who is questioning their sexual and/or gender orientation. Sometimes, the Q stands for “queer,” a term reclaimed by some LGBTs for political reasons.

Everyone Is Connected to the LGBTQ Story

While most people in our fellowship do not have family members and friends in the adult entertainment industry, everyone in the church and community has family or friends who identify as LGBTQ. So, clearly this week's guest and story hits close to home for all of us.

Christopher Yuan will be sharing this weekend at our 9:15am and 10:45am services along with his parents Angela and Leon. He will be back at 6pm and 7pm to lead two teachings on homosexuality (child-care is provided through 6th grade during these sessions.) The first session is titled "Homosexuality: Nature or Nurture" and the second "A Christian Response to Homosexuality." These sessions, as well as the morning services, are open to all in the community. Even if you disagree with the premise, you are welcome to attend.

Unlike many in the church who speak about the gay lifestyle, Christopher speaks from personal experience. Just look at this portion of his bio from his website:

While attending dental school, he began living promiscuously as a gay man and experimenting with illicit drugs. Within a few years, he was expelled from dental school, imprisoned for drug dealing and discovered that he was HIV positive.

But God has turned his nightmare into an exciting and inspiring story of redemption, grace and transformation. Christopher has an understanding heart for and a desire to minister to those working through issues of sexuality and those living with HIV/AIDS.

Christopher and his mother co-authored the story of their journey in a book titled Out of a Far Country: A Gay Son's Journey to God, A Broken Mother's Search for Hope.

Christopher and his family's story is incredible. It truly is a real life re-telling of the Prodigal Son story found in the Gospel of Luke. I know God is going to do great things this weekend.

Just to give you insight into the fullness of what God has done, watch the video below featuring Christopher and his family.

Pastor John Burke made a valid point in the video I referenced previously. He is speaking about the desire for pastors and believers to see others change. We desire to see transformation due to the transformation we have all experienced. Whether LGBTQ or straight, sin still infects humanity. We're all "born this way" so to speak. However, true change, real transformation cannot be forced or coerced. Only God changes people. It's a good reminder. This is not a statement that the church should ignore sin. Absolutely not. Sin is sin. Never affirmed. It is a statement about the call to love, show grace and mercy.

Amy, from Gateway, shares in the clip about coming to the church with her girlfriend with the preconceived idea, based on past experiences, that they would be hated, ostracized and kicked out. Therefore, they came in boldly to make a statement. They were open and didn't care and yet, over time, the message of story, identity and God's love broke through. She came to Christ. The relationship with her girlfriend dissolved. She was made new through the power of God.

It's a good reminder that only God can save.