davidtarkington.com
Home Archives Subscribe
Redemption Stories: Crissy Moran "In Her Own Words" - Video
Quit Smoking or Give Me $100

Engaging the World for God's Kingdom (Through a Baptist Association? Really?)

On Monday evening at Fruit Cove Baptist Church, hundreds from Jacksonville Baptist churches gathered together for our annual celebration. What a celebration it was as we formally affirmed our covenant partnership with church planters in Toronto and the Greater Toronto Area, welcomed 20 new churches into our network, celebrated Jesus through worship in different languages and cultures and heard a powerful message from Dr. Fred Luter, President of the Southern Baptist Convention.

The evening was full. The Holy Spirit was moving and as we move to better engage the Greater Jacksonville Area with the Gospel of Jesus Christ, we expressed a collective "AMEN" to what God is already doing.

However, as I sat in the congregation, worshipping with brothers and sisters in Christ, celebrating Jesus and being challenged by the Word, it hit me that I was experiencing something that just doesn't happen in many Southern Baptist venues. We were at an associational meeting. Seriously! An associational meeting!

For those who are not Southern Baptist, this may not connect, but let me try to paint this clearly. Baptist associations are voluntary networks of local Baptist churches, cooperating for Kingdom work in a region. These are often centered around a city, or a designated rural area. In fact, associations are older networks than state conventions.

As a church, we are heavily invested in the networking partnerships of our association. We truly believe we are stronger together than alone. We believe God affirms this and desires that we, as churches, live out the "one anothers" of Scripture throughout our city, region and beyond.

Now, why was this annual gathering such a big deal? Well. . .it's because in many of our local networks throughout the SBC. . .uh. . .well. . .there's just not much happening. In some cases the associations have shut down. As with some churches, there are examples of assocations in existence simply to sustain a work begun decades earlier and basically, they are dying a slow death. It's not due to lack of desire. There are great churches with godly pastors and members throughout our nation, but in some areas, the work of the association has been left behind. Consequently, we have associations struggling to pay their Directors of Mission, mortgages on office space and other bills all while seeking to discover their need or relevance in this age. While we were celebrating together the growth of the Kingdom through revitalization, peer coaching, network relationships, multi-cultural movements, international orphan care, and church planting in our city and internationally, I was reminded that this collective work is just not happening in most places.

Why is the work here thriving? (BTW - we've not arrived. Don't hear what I'm not saying. There's much work to be done. We've barely scratched the surface.)

Leadership is key. Dr. Rick Wheeler, Hal Haller, Jeff Litton, Dr. Walter Bennett and the support staff of the JBA have been very strategic in their tenure to move the JBA from an organization that seeks to sustain its existence to a conduit for increased Kingdom work. We celebrated last Monday all that God is doing. . .and we didn't celebrate mediocrity.

Our God is great!

The renewal and refocus of our network to Engage the city, Equip the saints and Expand the Kingdom has opened our eyes to work God was already doing. This is a big story and our churches are realizing it.

It's Not About the Association 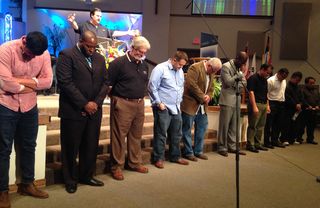 A few years ago there was great concern about our network. We were seeking new leadership following the retirement of Dr. Ron Rowe (who, by the way, was an excellent leader for the network during his tenure.) There were questions about relevancy and purpose. Some were very concerned about ensuring the survival of the association.

The concern about association survival was natural, but was wrong. I looked, there's nothing in the Bible about the survival of the Baptist association. However, there is much about proclaiming the Gospel, making disciples and expanding the Kingdom.

Our leadership team knew we were on the cusp of a new chapter of Kingdom work in our city. Groundwork had been lain years prior, but it was time for a new step of faith. Working to ensure the survival of the network was not the answer. How many churches become so inwardly focused, cutting programming and staff just to keep the doors open, not realizing they died decades prior?

The focus was to be and is God and the growth of His Kingdom. Is that what makes Jacksonville different? Perhaps. If so, it's a sad testimony of the state of many of our networks. You see, it's clear that God is at work in this city. In fact, He's at work throughout the world. He is not slumbering. We've prayed for an awakening in our city. I believe it is happening. It's not about the JBA. It's not about First Baptist Church of Orange Park. It's all about God!

The work of God isn't really happening at the events, though we encountered Him on Monday in a very real way. Monday's event was simply a time of celebration (oh, I know the common practice now is to put the word "celebration" on a meeting to try to trick people into thinking it will be exciting, but in this case there was no "bait and switch." This was truth in advertising.)

Dr. Luter's words reminded me of a very simple, yet profound truth. We're in a battle. This is war. We have an enemy and we have been called to "fight the good fight." We've not been called to "dance the good dance" or "meet the good meeting." Together, in Christ, we have victory!

Engage Jax and the GJA (Greater Jacksonville Area - yeah, I borrowed that acronym from Toronto)!

The Time Is Short

As Pastor S (one of our network pastors from the Middle East) told me when I was trying to convince him to take a break and rest every now and then, "They are dying and going to hell. I cannot rest. I must tell them about Jesus!"