davidtarkington.com
Home Archives Subscribe
The Inevitable: Phil Robertson Speaks His Mind & Is "Suspended Indefinitely" by A&E
The Blessing Offered to My Son

"Saving Mr. Banks" is Really About Healing the Wounded Heart

A movie about the making of a movie based on a book had just opened in theaters. For those unfamiliar with Disney lore, it is the account of Walt Disney's twenty-year odyssey to secure film rights from author P.L. Travers for the character and stories of Mary Poppins.

"Saving Mr. Banks" is  an interesting film, in that 99 percent of the audience knows that eventually "Mary Poppins" was made and was a tremendous hit. Words that never existed before like "Supercalifragilisticexpialidocious" entered the lexicon of many American children and images of Dick Van Dyke dancing with penguins somehow seem natural. 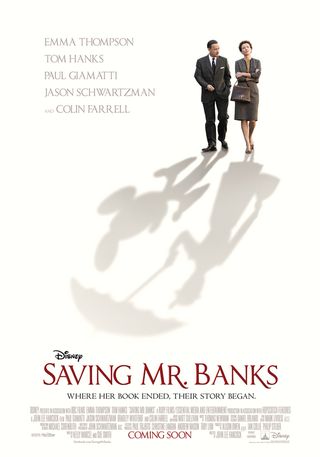 I just put "spoiler alert" there because other articles and blogs do that when speaking about a film that is currently in the theaters. However, I always read below the "spoiler alert" banner anyway. In this case, since everyone knows "Mary Poppins" was eventually filmed by Disney, there really aren't that many spoilers.

Since I don't recall ever watching "Mary Poppins" in its entirety, the title of this film "Saving Mr. Banks" didn't quite reveal much to me. I did some reviewing and soon found that Mr. Banks is the father in the Mary Poppins book and film. I think I used to know that, but had forgotten. Therefore, once I discovered who Banks was, the title made sense. . .somewhat.

This film goes back to Travers' childhood in Australia when she, her siblings and parents were struggling to make ends meet. Her father had a successful job with the bank there, but due to his bouts with alcoholism, and subsequent outburts and inability to function well at work, he was demoted. This seems to have pushed him even farther toward his addictive behaviors. Travers, as a little girl, obviously adores her father as he does her. The flashback sequences are done well and give the audience a sense of what may be going on in Travers' head as she so adamantly fights Disney for things regarding Mary Poppins and the Banks family that seem irrelevant.

As the story unfolds, it is clear that P.L. Travers carries a deep wound in her heart. Like all of us, we have wounds. These wounds are most often inflicted, willingly or unwillingly, by our earthly fathers. It's part of our human story.

John and Stasi Eldredge speak of this clearly in their respective books, Wild at Heart and Captivating.

John says it this way regarding men and their heart wounds:

Every man carries a wound. I have never met a man without one. No matter how good your life may have seemed to you, you live in a broken world full of broken people. Your mother and father, no matter how wonderful, couldn't have been perfect. She is a daughter of Eve, and he a son of Adam. So there is no crossing through this country without taking a wound. (Wild at Heart, 71.)

Stasi reveals this about daughters with wounded hearts:

"Saving Mr. Banks" is an entertaining film and while some I know have commented and Tweeted that "It's a cute film" it is much more than that. Unknowingly, the filmmakers and actors have portrayed that which is evident in the hearts of all people. We all carry a wound. Most often it is inflicted by those we love the most. What we do with that wound determines much.

Even non-believers desire healing. Their lack of acknowledgement of a Healer leaves them seeking throughout their lives and settling for temporary relief. Unfortunately, even some Christ-followers lack the courage and faith to invite God into the deepest parts of the wound. Consequently, those who claim and do follow Christ, remain the walking wounded, never fully free. Forgiveness is key and yet, not a surface-level, superficial forgiveness that never goes to the depth of the wound. The forgiveness that God offers us is that which He leads us to offer others - a forgiveness that says "What you did hurt, in fact it still hurts, but I choose to not hold it against you." That is the beginning of healing and sets the captive free.

"Forgiveness, Mrs. Travers," says Tom Hanks as Walt Disney. "It's what I learned from your books."

IT'S NOT REALLY ABOUT SAVING MR. BANKS

It may seem that making Mr. Banks into a likeable, affable character was truly Mrs. Travers' goal, but in actuality, it wasn't Mr. Banks that needed to be saved, but Mrs. Travers.

WHAT YOU TAKE WITH YOU AS YOU LEAVE THE THEATER

We all carry wounds and what we do with them is vital. "A cute movie?" - perhaps, but maybe, just maybe, God can use this story to remind each of us that He alone can rescue us and He alone can set us free.

Here's a good review on "Saving Mr. Banks" from Focus on the Family's Plugged In site.