I have had the opportunity to serve as a messenger from my church at the Southern Baptist Convention in Baltimore this week. If you are on Twitter, you may have noticed #SBC14 trending most of the week.

We have many things to celebrate as Southern Baptists. Just to be clear, I do celebrate those victories for God and His Kingdom and am proud to be a Southern Baptist. Our mission-focus took center stage at this convention as both mission boards (North American Mission Board and the International Mission Board) shared moving stories and testimonies of how God is working through our efforts of faithfulness throughout the world. Our generosity was celebrated as we looked at record mission giving, support for widows and orphans and an increased emphasis on Great Commission giving and the Cooperative Program.

Yet, in the midst of celebratory promos and thought-provoking panel discussions held by SBC agencies and other groups, the reality of the state of the SBC and the evangelical church in America hovered over the convention center.

I am not a pessimist and I do not believe the SBC (and yes, I'm speaking of myself in this designation) is simply "rearranging deck chairs on the Titanic." However, there is something amiss. Even as we celebrate the largest Lottie Moon Christmas Offering in our history, record church plants in our SEND>>North America strategy, positive moves on immigration reform, morality and other religious liberty issues, strides forward in racial reconciliation, and all that God is doing "out there" (this term is used to describe the amazing Kingdom growth movements taking place in other areas around the world) there is something amiss.

It was touched on by numerous speakers throughout the Pastors Conference and the Convention.

With apologies to James MacDonald, there was the "elephant in the room" that for the most part was danced around, but never addressed clearly.

That is, until Francis Chan said what he did on Monday evening. 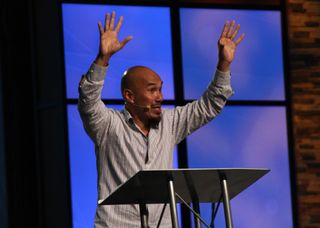 I was asked a few times by friends and acquaintences, "What did you think of what Chan said?" Well, that's a loaded question, but as I have thought about it, I believe he opened the door to a discussion that must continue. It cannot be left to quippy Tweets and discussions around exhibit booths.

Chan, in what I believe was a terrifying moment of honesty, through weeping eyes, shared that he sensed something just not right in the room. As I listened to him preach, I was thinking "He's not on tonight. Something's distracting him." I brushed the thought away, basically because I felt I really didn't know if he was "on" or not . . . and anyway, who am I to say?

Then, he said it.

He said that the last time he felt this was when he previously spoke at the Southern Baptist Convention.

At that moment, you could've heard a pin drop.

I know some probably left angry that evening, feeling that Francis had insulted them, or all Southern Baptists, maybe.

I did not. Francis shared how he grew up Southern Baptist. He apologized if he came across judgmental. He wasn't backtracking, but what I discerned was a man who gave God's message to God's people. . .and it was a hard message. A heart in tune with God's will break when God's breaks. Francis did not plan to bring that word prior to stepping on the stage. I'm confident of that. Yet, he did.

At that moment, added to what other pastors and speakers had said throughout the day and affirmed by what I have heard afterward, it was clear. God is at work throughout the world. It's a mighty work. However, if we find ourselves satisfied with the state of our service for Him, and continue to celebrate mediocrity as if it is excellence, we will miss God.

I believe our default setting (mine included. . .just so you know I'm not throwing stones here) has been to collectively complain about everyone else's speck in the eye while continually ignoring the log in our own.

Some question if we should pray for revival or if that's even biblical. Some wonder if the state of God's church in our culture is inevitably going to die. While the debate rages and lines are drawn, I'm broken this evening at a reality that just will not go away.

They don't know they need Jesus, but they do.

Oh, I love God. I love people. I have to. I'm a Christian. Not only that, I'm a pastor. So, I guess that makes me a professional Christian, right?

But, do I really love God and people enough to do something? You know, like introduce them to each other?

I know that theologically reeks of poor verbage. I know that God is the one who draws people to Himself. I know. But, I also know that God has given me a commission and somehow, for some uknown, stupid reason, I have become okay with just affirming its reality while ignoring it.

Maybe that's what was happening in the convention hall? Maybe there were more like me who have allowed the holy discontent with the status quo of western, American churchianity to be silenced.

Could it be that we have become so used to lukewarmness that we falsely believe it's the best there is?

Lord, you are at work. I want to join you in this work. I know the best is yet to come. I celebrate what you have done in our denomination, but I confess that I, for one, sometimes "settle" for less than best. I fear that often we are in the room with you, but like those in the multitudes following Christ around Galilee, we're with you, but we miss you. Break our hearts. Break our arrogance. Break our selfishness. Please use us as your instruments for unconceivable Gospel-centered, Kingdom work. Amen.

Posted by David Tarkington on June 11, 2014 at 01:03 AM in Current Affairs, Hot Topics for Churches, Missions, Religion | Permalink | 0 comments