How Does One of the Most Respected Coaches Become the Most Ridiculed?

Tony Dungy, former coach of the Tampa Bay Buccaneers and Indianapolis Colts, current NFL analyst for NBC Sports, founder of All Pro Dad and Family First, husband, father, and outspoken follower of Jesus Christ has been moved from many people's lists of "Most Respected" to "Most Hated" in just a little over a week. 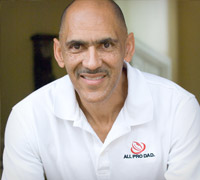 It all began with a a question posed to Dungy by a Tampa Tribune reporter a number of weeks ago. The question was about gay linebacker Michael Sam of the St. Louis Rams. Sam, who went public with his sexual orientation after a stellar career for the University of Missouri and prior to the NFL draft, is the first openly gay football player drafted by an NFL team.

Sam was a great college player, but even before his public announcement, was not considered a "sure thing" as an NFL lineman. As many in the northeast Florida area where I live know, just because a person excels at the college level does not always mean he will excel at the professional level.

Nevertheless, Sam's announcement skyrocketed him to cultural stardom as news agencies rushed to interview him, Oprah Winfrey attempted to chronicle his journey into professional football for a television show, and pro-LGBT groups and magazines labeled him a courageous figure.

"I wouldn't have taken him," Dungy told Ira Kaufman of The Tampa Tribune. "Not because I don't believe Michael Sam should have a chance to play, but I wouldn't want to deal with all of it. It's not going to be totally smooth…things will happen."

Dungy's answer to a question by Kaufman has gone viral.

Sportscasters, bloggers and many in the Twittersphere have labeled Dungy a "loser," "hater," "hypocrite," "bigot," and worse.

Arguments appear in op-ed pieces referencing Dungy's work with Michael Vick and his opinions regarding Tim Tebow as evidence that he is two-faced. Some have even sunk so low to create stories about Dungy's son who tragically committed suicide a while back, as ways to show Dungy's unloving nature.

It's amazing and terribly sad.

Read Dungy's original statement again - he said nothing that could be construed as "homophobic" or hateful. While it is public knowledge that Dungy has opposed measures to legalize gay marriage (as do many American citizens and the vast majority of evangelicals) his statements related to drafting Sam are purely his opinion. The problem is that his belief system is not politically correct and his Christianity places him (in good company, I might add) in a minority in our culture.

Nevertheless, though unecessary, Coach Dungy released this statement about his previous statement:

I was asked whether I would have drafted Michael Sam and I answered that would not have drafted him. I gave my honest answer, which is that I felt drafting him would bring much distraction to the team. At the time of my interview, the Oprah Winfrey reality show that was going to chronicle Michael's first season had been announced.

I was not asked whether or not Michael Sam deserves an opportunity to play in the NFL. He absolutely does.

I was not asked whether his sexual orientation should play a part in the evaluation process. It should not.

I was not asked whether I would have a problem having Michael Sam on my team. I would not. ...

... I do not believe Michael's sexual orientation will be a distraction to his teammates or his organization.

I do, however, believe that the media attention that comes with it will be a distraction. Unfortunately we are all seeing this play out now, and I feel badly that my remarks played a role in the distraction.

A good, but unecessary statement. Dungy's explanation will do little to placate those who have already categorized him negatively.

I respect Coach Dungy, not just for his ability to coach professional athletes, but for the leadership qualities he has shown, the love of Christ that comes forth when I hear him interviewed, the stances he has taken on biblical manhood, parenting and marriage.

As culture shifts at breakneck speed, many in our communities and churches struggle with how to live "in the world" but not "of the world." A child of God cannot simply ignore biblical truth and the transformational power of the Spirit of God. God's Word and His Truth is never celebrated by the world. It never has been. It never will be. Therefore, instances like Dungy's will happen, again and again, and more often.

I always wondered how long Dungy could remain in the public eye before being labeled this way.

Regardless how many are taking Dungy's quotes, it seems to me that he is exactly the same man who was highly respected, regarded and loved by many.

Just got back from family vacation on the Ore coast. Appreciate everyone who has communicated support, Esp the Christian community. Thanks!

Stand firm, Coach Dungy. You do not stand alone.

The world cannot hate you (regarding Jesus' brothers who did not follow Him), but it hates me because I testify about it that its works are evil. John 7:7 (ESV)