Rites of Passage & The Church's Role

Our leadership team at church is strategically preparing an overarching strategy for family discipleship. This is an exciting, yet troublesome journey as God is revealing areas in ministry where we have unintentionally built "silos" of ministry, believing the model to be best only to wonder where the disciples are.

Families are the primary disciple-makers and the church fellowship is to come alongside parents and children to encourage and sustain the walk. 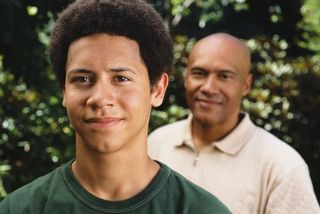 One such area of familial discipleship that I feel strongly about, though admittedly have failed to fulfill due to circumstances beyond my control, is that of walking one's son into adulthood. The rite of passage is a missing piece in our culture and therefore, we often end up with children wearing adult bodies with empty looks of wonder and confusion in their eyes.

Not everyone, but by and large, as a culture and even as the church, we have failed in this process.

The strategy God is leading us to develop is multi-faceted and powerful and will be revealed church-wide later this fall. However, one element of the strategy is the "rite of passage."

As my son was growing through adolescence, I dreamed of having a celebration such as the one described below and had even put into motion the plans for such. However, through certain circumstances and situations in our journey, God led me to shelve the event.

Nevertheless, I am adament on leading fathers and young men out of the fog and into a story that is large, powerful, life-changing and Kingdom-impacting. A life-long journey of discipling leads to a moment such as this:

A pastor at a sister church had a son who was entering his last year of high school. When the boy was age 17 or so, this father had met with some men who knew his son and had played significant roles in his life. His youth pastor. A coach. A mentor. An older friend. A grandfather. Uncle.

The meeting with this pastor and these men was designed to prepare them to share in a moment of significance with the boy. He gave them instructions on where to meet. They were told to stand, hidden behind trees until they heard him call to them. They received their instruction and were prepared as the day arrived.

On the day in question, this father and his son traveled to a piece of property outside the city where the father had already set up a fire pit and a couple of chairs. This was a familiar place to the boy as they had spent many days here in the past as a family.

The fire pit and seats were in an area accesible via a pathway through a wooded area.

The father and son walked the pathway, talking and sharing thoughts along the way.

Once they made it to the fire pit, they sat down and the dad began to share with his son how proud he was of him and what it meant to be a man, an authentic, biblical man of God. These were not new revelations, for the father had been pouring into his son for years truths regarding God and identity.

There is something very powerful to hear your father speak words of truth and love to you, especially as a boy.

At the appropriate moment, when the father had shared that God had brought many men along the way to journey alongside them and to help the son understand the reality of God's love and His plan for him, the father said, "Okay, gentlemen, you can come out."

At that moment, the men stepped out of the woods, into the clearing and moved toward the boy.

With tears flowing down his eyes, the young man was beginning to understand the power of the blessing.

These men who had loved him as a young man, mentored him, poured into his life and stood alongside his father to help lead him into manhood, spoke into his life at that moment. They shared encouraging, challenging and truthful words to him.

They prayed over him.

Then, they left the father and son to continue their discussion.

There's more to the story and it grows in power.

The father blessed his son that day and welcomed him into adulthood.

A Rite of Passage

That, my friends, is a rite of passage.

It sure makes getting a driver's license or a voting card pale in comparison.

This is just one example. There are many other elements to be put in place for families, parents, grandparents, children and young people.

Can you imagine when events such as have been described above are more than just things some do, but are actually part of the fabric of the local church?

Ministries that are so segmented they can stand alone, with no input and connection with other ministries within the church lead to broken models, tired volunteers and busy members, but not disciples.

That's why it is true that "greater things have yet to come" as we follow God's lead into this strategy.