davidtarkington.com
Home Archives Subscribe
Why We Must Remember 9/11
THE SIN OF OUTSOURCING: How "Good" Ministries Are Robbing the Church

When a Black Woman Walked Into Our "White" Church

Last night we hosted our small group in our home. Our group is growing - over 20 in attendance. This is a group primarily made up of millenials (college students and young adults between ages 18-29.)

We meet together on Sunday evenings and have some snacks. Then, we dig into the study of the evening, told in "storying" format.

Last night the teaching was titled "Jesus and the Ten Sick Guys." It was based on the Luke 17 account of Jesus healing the ten lepers near the village between Samaria and Galilee. 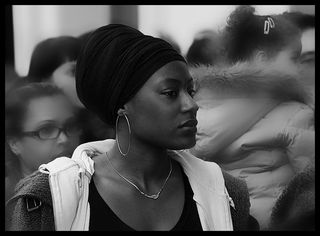 As we discussed the story and went through our Q & A time, it became clear that there were many teachings and truths in this short passage of Scripture. Here are some of the good things and things that raised questions in this passage for our group:

A five minute lesson lasted an hour and a half as discussion and more questions developed. Amazing how just a small passage can elicit so much discussion. And, as you can see, this group isn't afraid of questions.

Then, I posed this question, "Was the point of this story to squelch the racism of the Jewish followers around Jesus?" It was agreed that this was a point, even if not the main point. It was, in fact, one of many, but definitely one of the major reasons for the healing of the Samaritan.

Our group last night was a mix of culture and races. So, I asked this question, "What about church? Is there still a sense of discomfort or racism within the church in the west?"

For the millenial generation, this is a BIG DEAL and the discussion was healthy and powerful.

These young adults spoke up, gave their opinions and agreed that we have come far, but have far to go as the American church. What I found exciting was that their opinions on this issue were biblically-based and not just culturally-defined.

This generation, which may be as "color-blind" as any in our American history, truthfully shared their realities.

A bi-racial man shared how when first invited to our church as a teenager, he was hesitant. He wanted to know if there were any people in our church like him? I asked "What do you mean 'like you?'" He clearly expressed that he was referring to race. He said, "I didn't want to be the only black man in the room." He explained that he was seeking to come, but not be stared at or looked down upon because of his biracial culture. (BTW - He's one of our worship leaders now.)

A Hispanic girl shared how some friends of hers just cannot understand why she would attend a "white" church. She eloquently explained that to her the church wasn't "white" but was solidly teaching the Word of God and serving Him well.

A Hispanic man shared how he is proud of his heritage and though English is not his heart language, it is what he speaks most often now and since he went to public school in our community ever since he was six years old, he has been "Americanized" (his term) and feels most comfortable in English-speaking churches.

An African-American woman in our group then spoke up. She began with this phrase, "I don't want to offend anyone. . ." to which we said collectively "Go for it. Speak the truth."

She explained how she was first invited by her friend to come to our church and the fear that welled up inside her. She wanted to attend, but was afraid that she would be ostracized, stared at, looked down upon, etc. because this was a "white" church and she is black. Her candor was refreshing and opened up dialogue within our group about this very real issue.

The Jesus story of healing a Samaritan was used by God to lead this group of young adults to speak truthfully and authentically about the issues that are often ignored.

WHAT WE DISCOVERED TOGETHER

Here are some points that were agreed upon (in no particular order):

Oh, and as discussion continued, it became clear that skin tone and cultural heritage weren't the only elements that lead people to fear coming to church. It seems that many fear being ignored or worse yet - looked down upon. Sometimes these fears are based on other factors than race, like economic status, chuirch heritage, personal reputation, etc.

The enemy has used the weapon of fear often. Therefore, we must fight bravely and strategically.

As we closed out our study and prepared to finish off the rest of the snacks, I asked "So, what made you come back and stay?"

The answers were reassuring and hopeful.

"I realized you accepted me."

And at that point, it seems that we discovered how "Jesus and the Ten Sick Guys" was a story for our day, not just a good history lesson from the Bible.

Oh, and apparently the oneness of the church was experienced last night because they all stayed for quite some time, just talking, laughing and sharing stories with old and new friends. . .and the smaller groups weren't segregated!