davidtarkington.com
Home Archives Subscribe
"Unbroken" Is Broken Without the Epilogue
A Look Back at Predicted 2011 Church Trends

The Shepherd Who Breaks The Sheep's Leg

I was reading this morning a portion of the book Conversation Peace by Mary A. Kassian and came across this story. I shared it with my wife and we both were encouraged and amazed at the simple truths revealed.

On one of her daily walks, a woman visiting Switzerland happened upon a sheepfold. Venturing in, she saw the shepherd lovingly tending a single sheep, which was lying on a pile of straw apart from the rest of the flock. 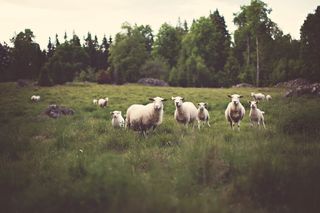 "Its leg is broken," the shepherd offered. Upon inquiring how such an unfortunate thing could happen, the shepherd sadly shook his head and explained that he had intentionally broken it. "Of all the sheep in my flock, this was the most wayward. It would not obey my voice and would not follow where I was leading the flock. On more than one occasion, it wasndered to the edge of a perilous cliff. And not only was it disobedient - it was also leading my other sheep astray. I had no choice but to break its leg."

Shocked, the visitor exclaimed, "But what will happen when it walks again? It won't follow you after what you've done to it!"

"Not so," replied the shepherd. "After I broke its leg, I took the lamb some food and it tried to bite me. But after letting it lie alone hungry for a couple of days, I went back. It not only eagerly took the food, but licked my hand and showed every sign of submission and affection."

"And now," he continued, "when this sheep is well, it will be the model sheep of my entire flock. No sheep will hear my voice so quickly or follow so closely. It will be an example of devotion and obedience. Breaking its leg was an act of kindness. Through its sufferings, it will have learned to follow."

Following the shepherd is always in the best interest of the sheep. I know many who are going through difficult times. In some cases, the difficulties are obvious attacks by the Enemy. In other cases, the challenges are self-made (still an attack by the Enemy, but one that was walked into knowingly.) Perhaps the challenges for those who are God's children are just instances where the shepherd has "broken their legs" for the purpose of saving them?