"Unbroken" Is Broken Without the Epilogue

As has become a bit of tradition in my household, the family went to a movie on Christmas Day. After apologizing to the young ladies selling tickets and concessions for making them work on Christmas, we entered into the theater designated for the 8pm showing of "Unbroken."

This film had been promoted for weeks. The biography by Laura Hillenbrand had been a NY Times Bestseller for months. The buzz about Angelina Jolie's directorial debut was strong and with such negative press about the Sony comedy "The Interview" and the only other real opening day competition being "Into the Woods" it was no surprise to see the theater packed for this film.

In the late 1950s, Universal Studios secured to the rights to Zamperini's story. They intended to produce a film with Tony Curtis portraying Louis. The film was never made, but Universal held onto the rights. When Hillenbrand's book hit shelves and shot up the NY Times list, it was inevitable that a film would be made.

There are numerous reviews of the film online now. The reviews swing from "Loved it!" to "Disappointed" and every level between.

Some pan the Angelina Jolie direction of the film, but most likely due to a distaste for Jolie rather than actual dissatisfaction with her direction.

Others dislike the portrayal of "The Bird" by Japanese pop-star Takamasa Ishihara. It is Ishihara's first feature film and with that taken into consideration, he performance was definitely above average.

The celebrated Coen brothers are credited with the script and while there are some great lines in the film, the dialogue was not excellent. 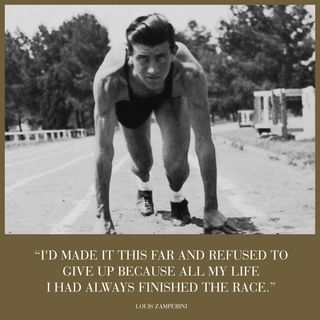 I have not yet read the book, but did receive it for Christmas. Therefore, I did something that I wish I hadn't - viewed the film before reading the book.

I'm not a film critic (I just pretend to be on my blog) but overall, I enjoyed the film. I admit that I entered the theater wanting to enjoy the film, and no doubt that led me to like it more than others may. However, since I'm now a pretend critic, here are some thoughts I had during the viewing (SPOILER ALERT):

As for some of the criticisms I'm reading and hearing, here's my take:

Angelina Jolie does not claim to be a follower of Christ. She appears to be a big fan and friend to the late Louis Zamperini. Apparently, she desired to make this film as an homage to him and sought his approval along the way. Louis was a Christian. His life was forever transformed by Jesus Christ. There are definitely large portions of his story that are covered in the book by Hillenbrand, but omitted from the film. Some are offended that Jolie didn't cover these aspects. I'm not offended because I would never expect her to understand fully the impact of Christ upon a life, having not (based on her own faith statements) never experiencing this personally. It's hard to convincingly portray that which you do not know.

Therefore, I believe she did a fine job of telling a portion of Zamperini's story. Louis' family apparently approves as well.

Nevertheless, there is a "rest of the story" that reveals the depths of transformation and life-change in Louis Zamperini's life. My friend, Rick Wheeler, recently shared this on his Facebook page. Here is a portion of his posting:

The story of Louis Zamperini is about the enduring and resilient human spirit. His triumph over everything life threw at him is unquestionably one of the most inspiring stories of modern history.

But there is a bigger and deeper story that the book presents that the screenwriters and the director of the movie missed: When Louis came back from the war, he was deeply wounded - not just physically but emotionally and spiritually. His hate for his captors and for "the Bird" prison guard in particular created a new prison in his life. One he could not escape from or endure by his resilient spirit. He was so tormented by his inner demons and nightmares of his captivity that he turned to alcohol and violence. Before PTSD was something doctors knew about, Louis' life was out of control and headed toward a destructive end.

Then, as a last ditch effort, his wife invited him to a Billy Graham event in 1949 in Los Angeles. That night, Louis acknowledged that he was broken and gave his heart to Christ. According to his own interviews, he had been experiencing nightmares every night since returning from his imprisonment. The night he was transformed by the gospel, he was freed from this torment and the nightmares immediately ceased. His faith was not just a crutch to get him through, it became his pathway to healing that would take Louis back to Japan on a mission of forgiveness. Louis wanted to free his former captors from the prison of guilt and shame he knew they were experiencing. The human will does not lead you to this kind of compassion, surviving a tortuous war and beating the odds does not transform a life in this way. The most incredible element of Louis' life was omitted from the movie. The pathway to redemption is not survival and resilience (if I can take it, I can make it) it is forgiveness that only comes from acknowledging that we are broken. The movie leaves the viewer with this false hope that extraordinary human effort is sufficient to overcome the internal and external conflicts of life.

I know that Louis and his family are pleased with how the movie portrays his faith and I would never want the movie to be presented as a religious film - on the contrary, I want the full truth of Louis' story to be told....because it was the part about surrender to Christ and forgiveness that met me at a broken place and brought healing.

The movie leaves this part of the story to text pages during the final credits. Camille (Rick's wife) and I could not believe that part of the story was left on the editing room floor. Overcoming adversity is always a great story. But the end of the war was not Louis' salvation as the movie depicts - in fact, the end of the war sent Louis careening out of control. Only Jesus can transform a life that has been so brutally tortured and change it into a force of forgiveness and healing. Resilience is not enough - only the gospel story will get you through your worst day.

I agree with Rick in his assessment. He says more about the film and the book in his posting on Facebook. While I enjoyed the film, it did feel incomplete. I have told people that it is a good film. I believe it is. However, I wouldn't say that it's a great film.

Here's why I believe this film is good. It will lead many to want to know more. Sure, many  will watch the film, leave the theater and say "Hmm, pretty good movie. Now let's go see another." However, others will be intrigued by Louis Zamperini's story and they'll want to know more. Some will read Hillenbrand's book. Others may read Zamperini's autobiography or perhaps watch the documentary produced by the Billy Graham Evangelistic Association.

Louis Zamperini's story is incredible. It's inspirational. It's challenging. Yet, until one knows the full story, it will always remain incomplete.

Ultimately, until Zamperini realized he was "broken" he could never discover completion. He surrendered to Christ, was made whole at that moment and now is home. His story continues to be used by God to draw others to Himself.

And that is good.

After Unbroken: The Rest of the Louis Zamperini Story by the BGEA

Devil at My Heels: A Heroic Olympian's Astonishing Story of Survival as a Japanese POW in World War II by Louis Zamperini & David Rensin

Don't Give Up, Don't Give In: Lessons from an Extraordinary Life by Louis Zamperini & David Rensin

Out of the Depths: An Unforgettable WWII Story of Survival,  Courage & the Sinking of the USS Indianapolis by Edgar Harrell & David Harrell