Guest Blogger Ashley Tarkington: "My Journey From PK to Child of God"

Growing up in a pastor's home is not easy. Oh it can be a tremendous blessing, but there are also the pressures that those who do not live in this "fishbowl" just don't understand. My daughter, Ashley, is graduating from the University of North Florida this spring. She has been a pastor's kid (PK) her entire life. She's known no other story. While many PKs find themselves pushing strongly against the values and biblical worldview that is taught in the home and echoed in the church, and thereby creating the bad stereotype that is joked about often within church circles. However, there are many more PKs who discover a faith that is their own, not just a carbon copy of their parents. That faith is right and true and Gospel-centered and leads them onto journeys that rightfully bring glory to God.

This summer, Ashley plans to serve internationally as a summer missionary. As always, God has the right to change those plans, but her prayers and opened doors seem to leading down this path. In preparation for this summer, she must be able to clearly articulate her story of faith (i.e. her personal testimony.) She has been journaling for years and today at lunch, she shared the following with me. So, here's Ashley, my "Guest Blogger" speaking truth as a Pastor's Kid, but more importantly as a Child of God. . .

In 2000, a movie was released based on the popular book series, Left Behind. Now, it wasn't a great movie, but there was a message at it's core that had me asking questions. I was only six years old and up to that point (and even up to today) I had been in church all my life. At the time, my dad was the youth pastor at our church. You could say that I had never missed a Sunday or Wednesday service. As a child, my life revolved around church. Not only did I attend all the children's activities and events, I was also "cool" enough (at least that's what I still believe) to go to many youth events. 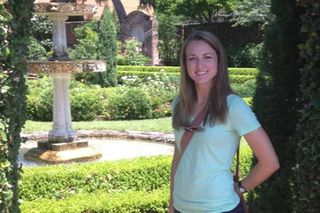 At the time of this film release, I was six years old. I was in first grade. I knew right from wrong. I knew that every Sunday I would sit in the front pew with my dad, while mom sang in the choir. Dad would stand down front at the close of each service with our pastor waiting for people in the congregation to come forward for prayer or to make a spiritual decision public in their lives. At this time, to me at least, it seemed like people were coming down front following the worship services to make a decision every week. It always seemed like there were baptisms happening as well.

Now, as much as my six-year-old self could understand, this was a great thing. People were being saved! Then, I thought to myself, "Am I saved?"

I knew who Jesus was. I knew most of the major stories in the Bible. I knew Jesus going to come back one day. The Left Behind film was shown at our church when it was released and the building was packed. The story showed how horrible scenario was for those who were not saved. To me, so many in my church were making decisions for Christ and the thought came to my mind, "What if what happened in the movie happened now? I would be left behind. I'm only six-years-old, my mom pretty much did everything for me. I can't be by myself."

It was a moment of panic for me.

One Wednesday evening after church, I was riding home with my dad in the backseat of our Honda. I was asking questions. I didn't want to be left behind. The movie was just that. . .a movie, but my dad shared more about God and his promises. I prayed to God and received Jesus into my life as Savior. I was so excited. A few weeks later, I was baptized, and the cool part was that my dad baptized me. It was a great day! I even told my teacher at school about what happened.

But, life just kept going. I still attended every church thing that was offered. I grew in knowledge and as a Christian and did all the "churchy" stuff. As the years went by, some things changed in our lives. Right before I entered high school, my dad became the Lead Pastor at our church. Our previous Senior Pastor retired. I always said that dad was now the "big man." It was cool, I guess, but there weren't as many fun trips with him anymore.

I went to the youth group, but it wasn't the same as when my dad was the youth pastor. High school was. . .well, high school. It didn't change me. I knew who I was and I was not ashamed of it, but I was pretty quiet most of the time. I behaved like I was expected to, how a PK should. I never pretended to know it all. Lord knows I never did. . .or will, but people would act like I did, or should. That was probably one of the most frustrating things.

I thought youth group was supposed to be more than it was. I wanted to be more involved and be a leader so I could make an impact. My life was pretty busy, though. I played basketball at school and during the season we had a lot of mid-week games, so it was impossible to make the leadership meetings.

I felt like I had nothing to offer. I was not blessed with the ability to sing or play an instrument. I wasn't super-outgoing and bubbly, so I wasn't sure how to engage with new people. I wasn't sure how to relate to people. In some ways, I felt that people were intimidated by me because of who my dad was. I hated going to youth group at times. I felt as if I didn't really belong, but no one could tell. I was good at putting on masks.

This was high school and at this point you're supposed to figure out where you belong and somewhat about who you are, right?

Then, my senior year began (2010-2011.) It was finally here! I was so excited. This was the year that I was going to become somebody and excel in the sport I loved. I was so ready for basketball season to begin. I had the potential to play in college. There were three schools looking at me at this point. Then, during our first game of our season, I suffered an injury - an ACL tear. I was  so angry and upset.

Wasn't I showing Christ to my teammates?

Did I not use my ability to play basketball to impact people for Christ?

My basketball career was over. I didn't know what to do.

This was the first time I cried out to God. I knew He had it all under control and that he had plans for me (Jeremiah 29:11), but I had to get to the point I truly believed that. I had to be able to see my complete identity in Christ. 2011 was the year that I felt I really became close with Christ. Our relationship went to an entirely new level for me. I knew I didn't want to just settle and live comfortably. I wanted to live for Him. I wanted, and still do, want people to see Christ in me way before they even see me.

Now I know this is pretty long and I've been told that testimonies, if you call this that, should only take two minutes to share, but this was just the beginning of my story. It's still being written. God is always working in my life, giving me desires and passions for Him and His glory that I never thought possible.

I find my identity in Christ. In some ways, I always have. I had to figure out how to bring Christ everywhere I went, to live for and become more confident in Him.

It does not matter that I have not been given a talent as a singer or artist. God can, and does use me the way I am, exactly how He created me.

I'm not as quiet anymore (I know some of my friends and family would laugh in agreement with that statement.) It's funny - when you get excited about Christ and what He does for you, you just can't really shut up about Him.

So, here's my two minute "testimony":

I was lost. I asked questions. I didn't want to be left behind. Christ died for me. He forgave me. I live for Him. I can't just keep that to myself.

I mess up. I sin. Yet, He still loves me and his grace is overwhelming.

Now, I'm ready to go into all the world.

Everyday I try to live for Him and become more like Him.

As I said before, my story isn't over. Christ has put a passion within me that I am ready to act upon. Im ready to be sent. That could be across the street or across the world. I want to make an impact for His kingdom. I want to pour into teenagers and college students the truth of the Gospel. I want to be a part of the "big picture" - to live missionally and worship Him daily. To encourage, engage and serve.