Gay Men & Soccer Moms: A Target Audience That Reveals Much About the Times

After finishing my post about the soon to be released Fifty Shades of Grey film, another film trailer hit the internet and has been making quite a splash. Now, my intent is not to have this blog become a movie review site, but as an observer of culture and one who attempts to keep up with the latest trends, it is quite disturbing how pornography and erotica are seen as acceptable and commonplace. While some would say that this is a sign of sexual freedom, in my opinion, it's a sign of cultural degradation.

I enjoy good movies and as a pastor have used clips and illustrations from popular films (legally) at times to help make points in my messages and talks. Believing that the message of the Gospel is written on the hearts of all humanity leads me to see the value of storying and the parallels in stories or movies that speak of battle and rescue and beauty and honor. Now, in most cases, the films I speak of are not written by believers in Christ. In many instances, these are just visible, moving images that tell a story that attempts to connect with an audience, ultimately for high ratings and profit.

I believe God is the Master Storyteller, the author of the Gospel and the hero in the story. That is why I believe that our Enemy seeks to pervert and destroy all that is good and holy and turn that which was meant for good into evil in an attempt to thwart the movement of God's Spirit in the lives of people.

Some of you are saying in your head right now, "Seriously? You're talking about movies. They're just movies." I know, I know, but foundational to all of life is a story that is deeper and more important than that which is projected onto a screen, streamed on Netflix or burned onto a DVD.

Nevertheless, there is a trend that seems to be growing. It's not really new. There have been stories of violence, sexual perversion and erotica around for ages, even prior to the advent of the film industry. Yet, as each year goes by, it seems our culture is moving a little deeper within Sodom (referencing the story of Lot in Genesis - living outside Sodom, near Sodom and eventually inside the city.)

Whether comedy, drama, action or romance, overt sexuality (hetero-, homo-, bi-, trans-, etc.) has become little more than enticement for audiences who seek to justify what they view under the guise of freedom, art or just entertainment. 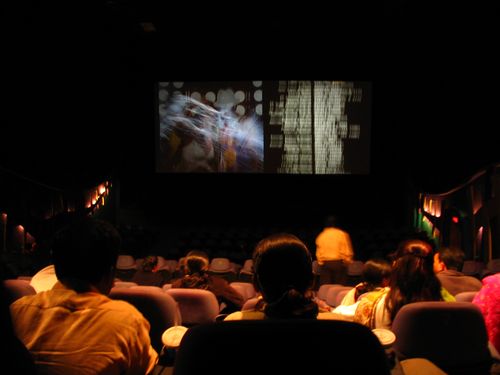 Last year, Lars von Trier's Nymphomaniac: Vol. 1 was released and subsequently was being written about, reviewed, and had YouTube trailers shared by many. The film starred some notable actors and actresses (Shia LaBeouf, Stellan Skarsgard, Uma Thurman, and Connie Nielson, to name a few) and received reviews speaking of it's artistic integrity and depth.

"The film is an intellectual high-wire act, death-defying, dangerous, entertaining, and delighting in its own inventiveness and daring." - Roger Ebert

However artistic it may appear. . .regardless how well edited and developed the film may be. . .it is little more than blatant pornography with a story attached.

No, I have not seen the film. I don't intend to do so. I have seen the trailer. . .and had to stop it due to the imagery presented.

So, Fifty Shades of Grey is not surprising. Neither are other sexually-laced and expressive new films on the way. Boundaries have been moved and Sodom has become home for many in our culture it seems.

With the sexually inclusive society now set in place, Hollywood is now overtly marketing to sub-groups and sections of the populous that will guarantee a strong opening weekend for their films. This is not new. Pixar films have been targeted toward children and parents for years. American Sniper and other war movies have been pointedly marketed toward men. Romantic comedies have a female demographic in mind. Different people enjoy different stories.

The eye-opening trailer for the male stripper film sequel Magic Mike XXL is clearly focused on two groups in our culture - gay men and "soccer moms."

When the first Magic Mike was released, the theaters were filled. Many women (wives and mothers) had movie nights with their girlfriends and packed theaters to enjoy the Channing Tatum, Matthew McConaghey and Matt Bomer film. The target marketing worked as the film finished second on opening weekend.

The other target group was gay men. I heard one gay man in our community speak about watching the film with his friends (other gay men) and how much they enjoyed it. This was no anomaly.

“It’s a fun night out with a bunch of gay friends to go see a movie about hot boys,” said Aaron Rhyne, 32, a theatrical projection designer who saw the film with about 10 friends. “We’ve been throwing the trailer around, laughing about it.” (New York Times - "Magic Mike" Is a Big Draw for Gay Men.)

It's been the mantra of Madison Avenue for decades - "sex sells." The sexual revolution and free love movement of the 1960s was little more than "moving near the gates of the city." Now, we are fully inside.

The trailer for Magic Mike XXL has been viewed hundreds of thousands of times online (well over 1 million if all versions are combined.) The reviews that laud the trailer as wonderful speak openly about the sexuality and openly stated double-entendres throughout. (I presume this allows an R or PG-13 rated trailer, to be viewable in all theaters.)

Even though these are sexually explicit (i.e. pornographic) films and are more common than we'd like to admit, we must realize that these stories are little more than perversions of holiness, morphed to confuse, trap and eventually aid the enemy to "steal, kill and destroy."

What's a Christian to do?

The same we've been commissioned to do for centuries - live as salt and light, make disciples, love the unloveable and honor God.

Sexuality is holy. It is God designed and beautiful, when experienced within His guidelines. Those guidelines are clear in Scripture - heterosexual and within the covenant of biblical marriage only.

Casual sex is only another term for casual sin.

Redeem the day. Don't be taken in.

Boycott theaters? That's NOT my recommendation. Most people view Christians, and especially Baptists, as people who are "against" everything anyway. Redemption shows what we are "for."

Be for the Gospel.

Be for God's plan for marriage.

Be for God's plan for sexuality and relationships.

Be for God's plan for holiness.