We Engage Those We Love

There are words and phrases that seem to take on a life of their own at time. They become popular for a season and now in the era of hashtags and social media tracking, the word "trending" has become a descriptor of such terms. 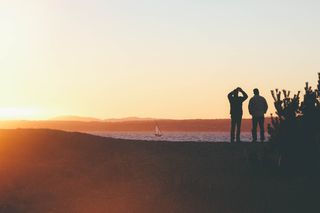 One term that I and others in the church culture have been using for the past few years is "engage." While our local Baptist association is still officially called the Jacksonville Baptist Association, more and more pastors are referring to it as the EngageJax Network. That has been an intentional shift (that likely frustrates some who hate change of any kind.) The Florida Baptist Convention now has a committee among the State Board of Missions titled "Engage Florida." (Full disclosure - I serve on that committee. . .and I'm still trying to figure out exactly what we do, but I'm new.)

Most recently, I have talked with a number of pastors of sister churches in my county who are tired of just continually doing church in silos, while ignoring the synergy that could be developed for Kingdom work if we locked arms and strategically focused on reaching our county together. Yes, we have coined the very creative term "EngageClay" (we live in Clay County.)

As you know, Baptists tend to have a few creative people in the tent and a whole lot of creative copiers. Nevertheless, the term "engage" is trending and so far, it's a good term. Why? Because it speaks of action. You cannot engage passively. You cannot engage philosophically. It requires movement.

What Does It Mean to Engage?

Ed Stetzer has written a profound article on his Christianity Today blog speaking of ways Christians will address cultural issues in the coming years. (Click here to read the full article.) In this, he speaks of those who will engage culture. As I read this portion, I found myself agreeing with this grouping. Perhaps it is based on the time I have spent with church planters in my community and in places where Christianity is in decline or fairly non-existent, but I relish the opportunity to connect with those far from God, for the purpose of building authentic relationships and the intent of sharing life with them. Yes, the ultimate intent is to share the Gospel, but I'm not speaking of false friendships just designed to "get the sale" but authentic ones where the Gospel can be presented naturally and lovingly and yes - intentionally.

As culture is shifting, most churches are still living as if they lived in a different era, not engaging the people around them. - Ed Stetzer

Conservative American evangelicals lament the reality that the "Moral Majority" of the 1980s is no longer a majority and the fact that "religion + politics = politics." This has led to some abandoning the cause and basically throwing their arms up in the air in a sense of defeat. At the other extreme, some have sought to sequester themselves in subcultures where "Christian" has become and adjective to describe everything (i.e. Christian school, Christian music, Christian movies, Christian books, Christian T-shirts, Christian breath mints, etc.) rather than a noun that defines identity.

Both extremes are wrong because neither fulfills the Great Commission and Great Commandment.

The War Is Not Lost

The phrase "culture war" has been bandied about for decades. This ideology is nothing new - from the Red Scare and McCartheyism of the 1950s, to the "free love" movement of the 1960s and every decade since, the pendulum has swung wide, often led by fear and personal and church identification based on what we are against, rather than what we are for.

There is a battle going on, but even many Christians falsely believe it is just a human battle and not a spiritual one. Ultimately, it is a battle between the prince of this world and God, and I have read the end of the book and God wins. I think that is often forgotten.

Yet, at many times, especially in western culture, the enemy is viewed as those in our communities with unbiblical perspectives and an animosity toward God and the church. In truth, they're just pawns of the Enemy.

To engage our culture means that we do not hate or seek to destroy those whom we are intent to reach for the sake of the Gospel.

When the Civil War was winding down and the North would soon declare victory, President Abraham Lincoln was preparing plans to reinstate some Southern leaders and reconstruct the South. Some in his leadership team and cabinet had differing opinions on what should be done. They told the President that the goal of war is victory and all enemies should be destroyed. Abraham Lincoln responded "Am I not destroying the enemy when I make a friend of Him?"

It's a profound truth, but one that must be shared. We were all enemies of God, through our sin. Yet, through God's grace and mercy, the Gospel, the Good News, was received and we had a title change. No longer enemies, but friends. Even more, children of God.

That is why we engage the culture. We do so because the culture is made up of people. People who are far from God, who do not know what they do not know.

The cultural shifts are happening at what appears to be light speed, but in reality the heart of man apart from God has always been clouded in self-righteousness, pride and sin. It is in this reality that the Hope of the world enters.

For far too many years the church has hidden itself within the walls of its buildings (not all, but many) while the world we have been commanded to reach and engage remains in the dark. Apparently record burnings, protests, political positioning and hateful speech with just a tinge of religiosity are not part of God's strategy for His church.

Yet, many believers struggle with how to engage a far-from-God culture without abandoning or watering down the Gospel and their belief systems. Why is this? Why is it that compromise when it comes to conviction is seemingly the only option some find when trying to engage the culture?

Did Jesus compromise? Absolutely not.

Yet, he engaged a culture many religious people would not. Just look at some of his miracles, audiences and friends: Gentiles, Samaritan women, unclean lepers, fishermen with salty language, tax collectors, etc.

Maybe, just maybe, as the centuries have passed, we have missed how Christ modeled cultural engagement and have become more like other biblical characters when it comes to this concept.

You know, it's just easier to be a Pharisee.

What's next for the church of the 21st century? Not a new model. Not a new strategy. In fact, that which must be done has already been done. We must engage our culture as Christ did his. He is our model. He showed the way.

As my friends and I seek to engage Clay County, Jacksonville, Florida, the United States and the world for the sake of the Gospel, it is clear that this must begin very close to home. Living missionally is more than another trending word. It is who we are as God's church.

We engage who we love. Therefore, love people as God does.

Posted by David Tarkington on March 07, 2015 at 09:28 AM in Current Affairs, Hot Topics for Churches, Politics, Religion | Permalink | 0 comments