davidtarkington.com
Home Archives Subscribe
How Must the Church Respond to Transgendered Children & Their Parents?
"Disappointed, but Not Dismayed" - The Florida Adoption Conscience Bill

This has been an interesting week, to say the least. Ever since the beginning of the year, I have felt convicted to be more adamant in my prayers and to view prayer as a gift. So often prayer is viewed as the passive response to the issues of the day. How many times have you heard someone say something like "I want to help, but all I can do is pray"? It's as if prayer is viewed as the last resort, rather than the first response.

As the world watches, tragedies are unfolding. Some have mode global impact. Others have been regional. Still others are impactful for small communities or individual families. Yet, the pain and uncertainty is just as relevant.

It is no accident that the National Day of Prayer is soon here. The first Thursday of May has been this designated moment for years and while it is vital to pray on this special day, we should view prayer as less of an officially sanctioned public gathering and more of an intimate connection between the individual child of God and the Heavenly Father. Of course, that is what prayer should be. Yet, even the disciples showed that prayer is not always easy. In fact, they walked with Christ for three years and still admitted that they were missing something in their prayer lives.

I guess we're in good company.

Thankfully, Jesus gave us a template to use in our prayers. While reciting the "Lord's Prayer" isn't necessarily bad, remember that it is a template given by the Son of God for us to use when coming to the Father. The template gives us a reminder of His sovereignty and holiness and also gives us permission to plead boldly for the needs and concerns we have.

So, in no particular order, these items have been pushed to the forefront of my prayer list. Join me in seeking God's face and His will in these areas (and others): 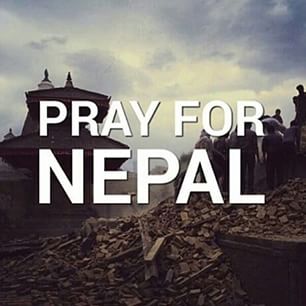 Every time I check the latest on the devastating earthquake in Nepal, the numbers of victims increases by hundreds. Pray for this nation and those impacted by the disaster. Also, pray for our IMB missionaries and other believers serving in the area and offering relief and hope. Click here for some recent information from the IMB regarding the quake.

Almost a year ago, my wife and I joined hundreds of others at the annual Southern Baptist Convention in the city of Baltimore. We were struck by the beauty of the city and the inner harbor and now, as we turn on the news, we see pandemonium. The rioting and the unnecessary violence is heart-wrenching. The police need our prayers. The citizens living in fear need our prayers. The latest divide among the races shows that we have far to go when it comes to racial reconciliation. We see how the enemy is using this to appear powerful, but there is hope. We know the Lord can heal and He will. Pastors and Christians in the city are uniting in prayer and we join them. Yes, black lives matter. . .and so do white lives, brown lives, yellow lives, etc. Ultimately, all lives matter and the Gospel expresses that message clearly. Pray for people to have ears to hear and that healing may begin.

The SCOTUS is hearing oral arguments regarding states' rights to define legal marriage as that being between a man and a woman. In no other point of our history has the culture seemingly shifted so quickly on a values issue such as this. Those making arguments before the justices need our prayers. So, too, do the members of our Supreme Court. Though it is my conviction that the government shouldn't define marriage in that the government didn't invent it, the facts of the matter are that this family and marriage definition impacts not just the government or a handful of states, but every citizen and every church in our nation.

I have blogged numerous times about the Florida Conscience Bill (HB 7111) that moved through the Florida House and is now in the Senate Rules Committee. This bill will allow faith-based groups like our Florida Baptist Children's Homes to continue to function based on convictions regarding child placement in adoptive homes. Apart from the passage of this bill from the Senate and the subsequent signing into law by our Governor, the Children's Homes and other faith-based groups serving children will most likely have to find alternate funding and may have to serve fewer children in the future, leaving many to fend for themselves.

I have preached at twelve funerals this year and attended others from people in our church family. Rarely has a week gone by without a death in our church family or an extended family member. While we all know that death is the "destiny of every man" as Solomon wrote in Ecclesiastes, the truth is the grief that comes in times like these can be overwhelming. The God of Peace is real and our prayers are needed for each other.

There are many other items on the prayer list and at times, "overwhelming" seems to be the descriptive term of the day. Nevertheless, prayer is powerful and God honors the intimate, repentant prayers of His children. May we never be guilty of "just praying" when all else fails, but to respond and even see prayer as a pre-emptive strike against the Enemy's attacks.

Won't you pray with me?