Indiana Was Just the Beginning - Discrimination or Religious Freedom?

For the past couple of weeks, I have shared details regarding a proposed bill moving through Florida's House of Representatives. The bill - HB 7111 - was passed on Thursday in the House, but not without some powerful debate.

Depending on which version of reporting on the issue you read, this was either a "declaration for religious freedom and conviction" or a "license to discriminate." Sound familiar? These are the same elements that Governor Mike Pence and the Indiana legislature were facing just a few weeks ago.

The Bill As Viewed From Both Sides

HB 7111 is a bill, developed quickly as a response from constituents who declared the dangers of a previously passed bill intent on helping foster and adoption within the state. The new bill is designed to allow faith-based foster and orphan care organizations in the state to stand firmly on their religious convictions when placing children in foster homes or adoptive families.

Ultimately, the issue is the placement of children in homes where both parents are of the same gender. In many faith-based groups, being forced to place children in such homes would cause a conflict with deeply held convictions.

The divide is clearly visible.

Groups opposing the passing of the bill on the grounds of LGBT discrimination have made the following statements:

#HB7111 passes #Florida House 75 for, 38 against. While the speaker claims it was a "historic" day, it's a rather sad day for Florida.

Take a look at the FL Reps who SUPPORTED the discriminatory adoption bill by Rep. @jasonbrodeur. #HB7111 pic.twitter.com/oQUIuaW8xZ

During the debate on the House floor, representatives on both sides of the issue at hand were vocal and clear in their personal convictions. Scripture was used. . . by those opposed and by those in support of the bill. Applause was heard numerous times within the chamber, leading the Speaker to call for quieter support throughout the remainder of the discussions. By and large the debate was civil, but it is clear that this issue will fester and grow and become a political hot button for our state, regardless what the Senate and the Governor eventually do.

To give you better understanding of the depth of the debate, click on the video link here or the image below. The debate on HB 7111 begins near the 58 minute mark. 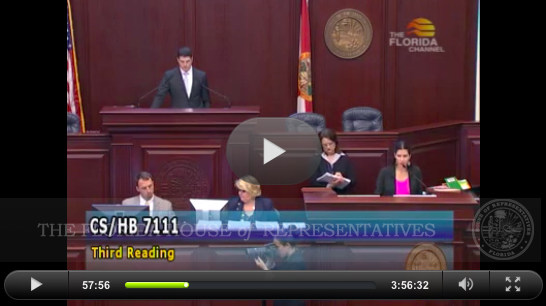 To be clear, I am biased regarding this bill. As a pastor of a Baptist church who supports financially and in other ways the work of the Florida Baptist Children's Homes, I firmly believe the passage of HB7111 was needed. In fact, I believe more is needed as we now await possible movement in the Florida Senate and then a potential signature from Governor Rick Scott. Religious liberty is at stake, regardless how the argument is framed. I am not "hiding behind religious freedom" as some politicians have stated, in order to discriminate against those in the LGBT community. Nevertheless, some will never view it this way. The hashtag #KidsFirst has been used by those opposing the religious freedom declaration of HB 7111. In my opinion, the push against this bill and potential law has little to do with the #kids and much to do with adults, agendas and those who oppose any who have religious convictions that are not concurrently held by all.

The bottom line is that Florida Baptist Children's Homes, as well as other groups within our state may be forced to cease offering services for fostering and adoption if religious liberty is not protected. While many faith-based groups do receive state money, it should be noted that there exist areas where religious conviction and categories of conscientious objection allow for services to not be offered (i.e. abortion services in certain hospitals and clinics) even when it would be legal to do so. Since there are over eighty children's services organizations within the state of Florida, it stands to reason there would remain many that are not religiously affiliated and therefore, would not have a conscientious objection to certain placements as would others.

If the Florida Baptist Children's Homes were to forced to cease offering these services, over 106,000 children would not be served annually. Truly, this is for the kids.