davidtarkington.com
Home Archives Subscribe
What Do You Do With Mother's Day?
What About Baccalaureate?

"What Does The Bible Really Teach About Homosexuality?" by Kevin DeYoung - Book Review

Kevin DeYoung is the senior pastor at University Reformed Church in East Lansing, Michigan. He is a prominent blogger and author. Many of his articles can be found on The Gospel Coalition's website. His books are well-known and available on our church's online bookstore and at Amazon, as well as numerous other places where books are sold. 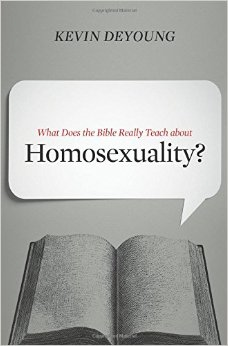 Buy this at our Amazon store

His latest book delves into a topic that not that long ago seemed to be far on the back burner of church and cultural life and now has become an issue not to be ignored. The culture shift in the west, especially in the United States, on the subject of homosexuality, LGBT lifestyles and same-sex marriage has been dramatic, to say the least. Those on both sides (and in the fuzzy grey areas in the middle) of the debate on Christianity and homosexuality and all that comes with that agree that the culture shift is real.

DeYoung's book What Does the Bible Really Teach About Homosexuality? (Crossway Books, 2015) seeks to speak into the issues with a winsomeness and truthfulness without just echoing the words and arguments that are little more than reactionary.

In all candor, I land with DeYoung in his assertion of homosexuality and the Gospel. I found myself highlighting numerous sentences and paragraphs, to the point of realizing that if I highlight everything, it does no good to highlight anything.

DeYoung's introductory section that backs up from the question presented in the title, gives foundational footing for a discussion much deeper than the subject of gender and attraction. The title of the Introduction is "What Does the Bible Teach About Everything?" It is wise to read the Introduction, for in these thirteen pages, there is value and substance that gives strength to the subject at hand throughout the remainder of the book. I share this because I know there are many who skip Forewords and Introductions to get to the "meat" of a book. I caution you to not do that in this case.

There are numerous books flooding the online and physical stores about the subject of Christianity, the Bible and those who identify as LGBT. Many are what have been categorized by DeYoung and others as "revisionist theology." The title is self-explanatory. Yet, these writers have influence and make strong points in their books, blogs and speeches. The audience in America is clamoring for these versions of truth. DeYoung references numerous revisionist writers and even some self-declared LGBT writers in a way that is not dehumanizing and actually is complimentary of writing style and research. In fact, there are occasions when DeYoung agrees with some of the revisionist theories.

Furthermore, there is nothing ambiguous about the biblical witness concerning homosexual behavior. Even many revisionist scholars acknowledge that the Bible is uniformly negative toward same-sex activity. The gay Dutch scholar Pim Pronk, after admitting that many Christians are eager to see homosexuality supported by the Bible, states plainly, "In this case that support is lacking." (page 73)

Of course, there are far more instances where DeYoung disagrees with the revisionists and he answers the objections clearly and concisely in this book.

As is the case with many books like DeYoung's the reader comes in with a preconceived idea of what he/she already believes about the subject at hand. This is true for me. I cannot say that I was opinion-less on this subject.

However, if a reader is truly seeking for answers, not ammunition, DeYoung's book gives clear biblical account and heart-felt answers. This book is written by a pastor and while his convictions are clear regarding the veracity of the Word of God and the power of the Gospel, there is a clear passion for God, His Truth and a love for people to know Him that permeates the book.

This book is not an easy read, in that the subject is so polarizing. Yet, it is a clearly understandable read, for those of all walks of life.

I believe DeYoung's book is a good companion to others on the subject, such as Christopher Yuan's biography Out of a Far Country and Ann Mobley's story of loving her son through this journey in If I Tell You I'm Gay, Will You Still Love Me?

DeYoung addresses the most common arguments used to discount biblical teachings and historic doctrine that define homosexuality as sinful. He speaks to the revisionist platforms on the type of sin referenced in the story of Sodom and Gomorrah, the pedo-sexuality only argument, the giftedness of chastity, the gluttony, divorce, greed, etc. vs. homosexuality debate that often arises and the language questions that many use to state that what is written in the Word is not what was meant.

He addresses these as a theologian and one who understands language nuances. The footnotes and research reveal a studied, intellectual approach.

I would caution the Christian reader who is just looking for "ammunition" to use against their co-workers, children or other acquaintances living proudly as LGBT. I would, nevertheless, encourage Christians to be well-versed in the details and the arguments offered, so that answers in love may be offered.

The story of LGBT and the church is not going away. Some churches, as has already been seen, will shift their theology and doctrines to allow for the open practice and acceptance of LGBT members. This will be most evident in the hosting of same-sex marriages, most likely. Other churches will stand firmly on their convictions, not wavering in their doctrines and theology. They'll be accused of "being on the wrong side of history" (which, by the way, is addressed in DeYoung's book.) The churches that stand on the narrowness of God's Word will ultimately have broad influence for the Kingdom. It should be noted, that a narrow stand is needed, but must be done in love.

Love and acceptance are not the same. Love and affirmation of sin are not the same. To be Christian is to love the Lord our God with all our heart, soul, mind and strength and to love our neighbors as ourselves. This is the First and Greatest Commandment. . .and we weren't asked to vote on whether to accept it. It was commanded to the church and we are to live it out. Yet, it must be known that "loving our neighbor as self" is not an affirmation of ungodliness. It is an affirmation of selflessness.

Here are some powerful quotes, in no particular order of importance from DeYoung's book:

"In the Old Testament, not all uncleanness was sin, but all sin made you unclean." (page 46)

"Homosexual practice is an example on a horizontal plane of our vertical rebellion against God." (page 52)

"Homosexual behavior is a sin, not according to who practices it or by what motivation they seek it, but because that act itself, as a truth-suppressing exchange, is contrary to God's good design." (page 53)

"According to Paul's logic, men and women who engage in same-sex sexual behavior - even if they are being true to their own feelings and desires - have suppressed God's truth in unrighteousness." (page 55)

"It is no little mistake in God's eyes to encourage and support what harms our fellow creatures and dishonors our Creator." (page 56)

"Talking is not the problem. The problem is when incessant talking becomes a cover for indecision or even cowardice." (page 76)

"The biblical teaching is consistent and unambiguous: homosexual activity is not God's will for his people." (page 77)