Last night, my wife and I previewed the new Kendrick Brothers' film "War Room." The Kendricks are the men who brought "Flywheel", "Facing the Giants", "Fireproof" and "Courageous" to theaters and have found great success in placing Gospel-centric stories on film in an engaging and challenging way.

They also have discovered how to make Christ-centered movies that I'm not embarrassed to invite non-Christians to view. The production quality and the acting has increased with each film.

I have been seeing teasers and the trailer for "War Room" for weeks and, to be honest, I was not drawn to this story initially as I was to the previous three films. Maybe it is due to the fact that there were no firetrucks, police cars, guns, or even football games presented in the story. Yes, that's a stereotypical male response, but this is my blog, so I figured I'd be honest. 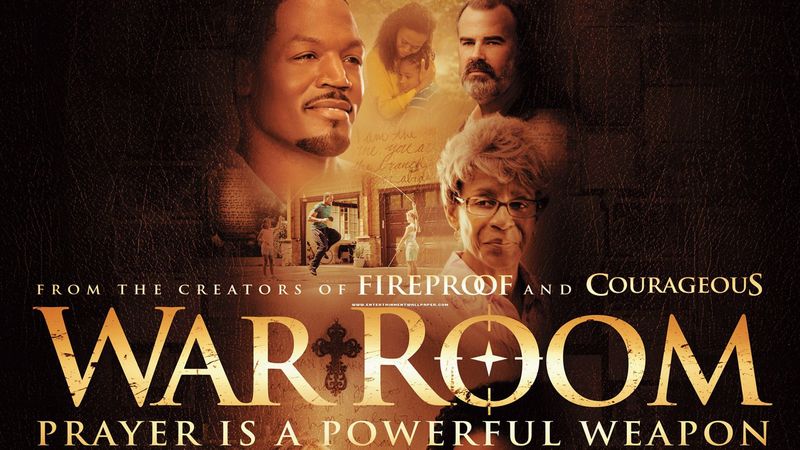 The "Pastors' Preview" was held in Jacksonville on Tuesday and the theater was full. Each of us received our "gift bag" with promotional items and a survey card for the distributors.

Trailers of two other faith-based films were shown. These look really good as well ("Woodlawn" coming in October 2015 & "Risen" coming in January 2016). Then, the new film then began.

Images of the Vietnam War filled the screen. It appears the partnership with Sony and Tri-Star provides some quality footage for the filmmakers. Narrated by Miss Clara initially (a major character who leads by example as a true "prayer warrior") we see the story of family, joy and heartache revealed. The "War Room" motif is connected to the room where Miss Clara's deceased husband served during the war in planning next steps against a powerful enemy.

Flash forward to present day and Miss Clara is a senior adult seeking to sell her home so that she can move in with her son. Welcome newcomer to film, but not to the Christian audience viewing (especially the women) Priscilla Shirer. Shirer plays the main character in this film. She is a real estate agent in a troubled marriage. However, this is different than the marriage story presented in "Fireproof." Kudos to the Kendricks for touching on a powerful subject, but not just rehashing the same story but with an African-American couple rather than Kirk Cameron and Erin Bethea.

The main characters' troubles leave me and every other pastor in the room thinking "Yep, I know a couple just like that." It's not stereotypical type-casting. It is more a revelation of the real world and real battles that our friends, family and church members face.

I am not going to spoil the movie for those who have yet to see it. However, I do wish to say that as the story unfolded, I was moved. I know it's just a movie, but God works through story and often a story played out on the screen allows for some very hard truths to be revealed in one's heart. This is true for me, at least. In the area of prayer and forgiveness, I was confronted with conviction, not by the Kendricks, but by God. It's amazing how he uses story.

This film is focused on prayer. That is no secret. That's the "War Room" that Miss Clara has in her old home. A closet where she goes to pray and do battle. It's a literal interpretation of the Scripture.

Miss Clara affirms that a physical closet is not the point, but a quiet, intentional place for prayer is.

The story in the film unfolds. God does amazing things. I'm glad that not all problems are solved, but the sense of the sovereignty of God and the love and grace he bestows upon his children is clear.

The message is obvious - PRAYER WORKS!

Prayer for family members, loved ones, circumstances, situations, relationships, etc. are all valid. I'm reminded of the reality God has shared with me over the past year. . .

Prayer is our active weapon against the enemy. As long as it remains our passive response when we feel all else has failed, we will continue to feel and live defeated. . .and we don't have to.

I left the theater thinking how amazing God is in bringing the message of prayer through this film at a time when I have been discerning His voice regarding the church and our often weak, passive prayer strategies. Also, the personal conviction that my prayers have been less than adequate for a man seeking the face of God and leading others to be "battle ready."

One of my favorite scenes is the one embedded below. . .

As a church, we will likely purchase all the tickets for our local theater during opening weekend again, as we have done with "Courageous" and other films like "October Baby." Yet, this outing is less a night of entertainment and more of a resounding call to pray like we mean it.

Prayer is not a manipulation of God to get Him to do what we desire. Rather, it is our humble admission of His sovereignty over all and our invitation into intimacy with the Father.

Final Words About the Film