Another Flag Flies High In Celebration of Today's SCOTUS Ruling. Now What?

Over the past week, in the aftermath of the tragic murders in Charleston, South Carolina, there has been much debate over the public display of a flag that holds much history and essentially creates  division in our nation. Politicians and pundits as well as religious leaders and concerned citizens have made statements and decrees about the flag and what it represents. Intelligent people on both sides of the issue have taken to the blogosphere and the internet to state their case. Businesses have removed any items with the emblem upon it. My thirty-year-old high school yearbooks now seem offensive. (Our mascot was the Rebel and a certain battle flag was displayed throughout our school.)

Eddie Gilley, the Baptist Collegiate Ministries Director at the University of Florida, wrote a poignant article about this. You can read it here. 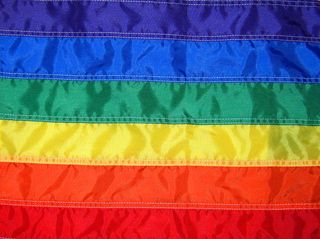 There is another flag that also creates division in our nation. This one, however, is not receiving the same level of ire and mandates.

This flag is also being hoisted on flagpoles owned by government entities. The rainbow flag, a symbol of the LGBT community and the public statement of "pride" during official gatherings and ceremonies is being waved highly today in Washington DC and in other communities throughout our nation.

For months this day has been anticipated. Futurists stated that it was inevitable. The church has been positioning for a response, while others have prepared celebrations. The court has effectively instituted a redefinition of the 14th amendment with today's ruling that says states must allow same-sex marriage.

Justice Anthony Kennedy, in writing for the majority stated, "No union is more profound than marriage, for it embodies the highest ideals of love, fidelity, devotion, sacrifice and family. In forming a marital union, two people become something greater than they once were."

Each of the four justices opposed to the ruling wrote their own dissents.

Chief Justice John Roberts, in his dissent stated, "If you are among the many Americans—of whatever sexual orientation—who favor expanding same-sex marriage, by all means celebrate today's decision. Celebrate the achievement of a desired goal. Celebrate the opportunity for a new expression of commitment to a partner. Celebrate the availability of new benefits. But do not celebrate the Constitution. It had nothing to do with it."

Once the ruling was announced, the news media and pseudo-news media began pushing stories out regarding the decision and its ramifications. Those in support of the decision are celebrated as loving and accepting and progressive.

Those in opposition to the ruling are categorized as haters, wrong-minded, sexually prejudiced and "on the wrong side of history."

This is no surprise and yet, today we live in a different America than we did just 24 hours ago.

I have received numerous text messages, questions on social media and through email and from friends and acquaintances regarding this announcement.

We know that prayer is needed. We know this intellectually, but for many prayer has been anemic for years and when it is little more than a blessing over a meal or a request to heal all the sick people and "be with" everyone we know, there is need for true prayer.

Pray for guidance and discernment.

Pray for peace in the midst of the cultural shift.

Pray for the love of God to reign within us so that while not affirming sin, we may truly love those with whom we disagree and especially those who live opposed to the Gospel.

The Challenge to Come

While many who self-identify as LGBT have no desire to become a poster-child for same-sex marriage or public fights, there are some who promote the #LoveWins theme but are overwhelmed with hate and hurt. Some will seek to be married in the local church buildings and churches will have to make decisions  that will likely draw legal action.

There will be some churches (and already are) who will gladly open their doors and will even officiate same-sex weddings.

There are also many, like our church and those under my leadership, who will refuse to host such a wedding or perform a ceremony. Whether a church's by-laws declares their right to refusal, the lawsuits will inevitably come. It is in these days that capitulation will happen in many "churches." This is unfortunate.

We Never Were Culturally Accepted

Today's ruling is shocking to many. There is a false belief that Christianity (true biblical Christianity) was at one time culturally accepted as the norm and highly regarded. I do not discount that history affirms a more accepted morality as proposed by the Bible was more common in the past, but the reality is that the world has been opposed to the Gospel since the day that the Enemy tempted Eve and Adam. Today's ruling is a reminder of this truth.

Panic is not the response needed. Knee-jerk reactions are not needed, either. The church may get smaller as the culture slide continues, but we have always known that this is a narrow road we travel and the broader influence for the Gospel always comes from a narrower footprint.

So, we pray. We pray for God's name to be hallowed and for His Kingdom to come, here as well as in heaven. We pray that we will hear his voice and follow His commands. We pray for those far from God to be broken to the point where they respond to the lure of the Gospel.

That is our hope, not the Judicial, Legislative or Executive branches of our government or any other entity.

So, I'm now a conscientious objector to a ruling put into place today. The 14th Amendment has been redefined and I lament the reality of what this means.

We stand under another flag or banner and it's not the one that is pledged at Vacation Bible School, but one named Jehovah Nissi.

And Moses built an altar and called the name of it, The LORD Is My Banner. Exodus 17:15 (ESV)

The Lord is our banner.

Let's pledge our continued allegiance to Him.