davidtarkington.com
Home Archives Subscribe
The Problem With Gender Neutral Bibles & Gender Neutrality in the Church
Identity is Bestowed, Not Manufactured - Jenner, Dolezal & Other Posers Like Me

I Know the Scorecard Has Changed. . .But It's Hard Not to Look at the Old One

The news media has been reporting what they declare to be the decline of Christianity in America. It seems the latest Pew Survey (this is the name of the research group, not a survey of number of pews in your church. . .though that survey probably exists somewhere) reflects this reality by showing the

growth of the "Nones" (those with no religious affiliation, and the decline of mainstream Christian denominations and groups with the greatest decline being with Mainline Protestant affiliations.

Is The Sky Falling?

The simple answer is NO. The church will not fail, even if buildings close and denominations lose traction. Some churches should close. Some denominations, based upon unbiblical and ungodly choices will decline. . .and should. And, the reality is that as the culture swings further away from biblical morality, those churches who continue to stand firmly on the Word of God and seek to love Him and others well, will likely be marginalized by a culture that cannot understand.

This is not unique to the United States, nor is it unique to our time in history.

Nevertheless, as Ed Stetzer pointed out in an op-ed for USA Today. . .

While it should be noted that evangelicals' share of the overall U.S. population dropped by 9 percentage points over the last seven years based on denominational affiliation, the percentage of U.S. adults who self-identify as evangelical or born-again rose from 34 to 35% over the same period of time. Don't miss that: More than one-third of Americans call themselves evangelical.

This is part of the growing "evangelicalization" of American Christianity in which the church in the U.S. is increasingly taking on the attributes of evangelicalism. According to Pew, half of all Christians self-identify as an evangelical or born again.

I have read the books on missional movements and engagement. I have led conferences on the paradigm shift that must take place within local churches in order to honor God and engage a lost culture. I get it. The scorecard has changed. Yet, even though I know this. . .it's difficult not to default back to that which I have always known.

When I was a kid going to Cincinnati Reds games, I'd take a pencil and, at least for the first few innings, keep score on the provided scorecard program page. It kept me interested in the game and since baseball seems to be the sport that focuses most on statistics, I felt like I was in the know.

As a kid, I would play baseball, basketball and even soccer (just one season - we lost every game except the one I missed. I figured out then that soccer wasn't my sport.) I have a few trophies from those years, but they were for winning. Even as a kid, the score mattered to me. I know we now live in the "everyone gets a trophy" age where the score isn't even kept in certain situations. I get it. I understand the reasoning, but I also know this - the league may not keep the official score for the kids' sports, but most every parent in the stands knows exactly what the score is.

That's a message for another day.

Nevertheless, another scorecard of sorts was released today. This one is from Baptist Press and reveals the state of Southern Baptist Churches in our nation, supposedly. I read the article and did what everyone I know does when they see these lists and charts. I went to my state (Florida) to see how we have done financially, church number-wise, number of baptisms and all other indicators. Then, I looked at where were were in relation to other states, which is crazy because Florida Baptists aren't part of a sports league. It's not like we are competing against Georgia (we beat them in baptisms, by the way) or Tennessee (we beat them in baptisms, too) or Texas (that's unfair, they have two conventions and more teams. . . uh, churches). You see, this can be really unhealthy. 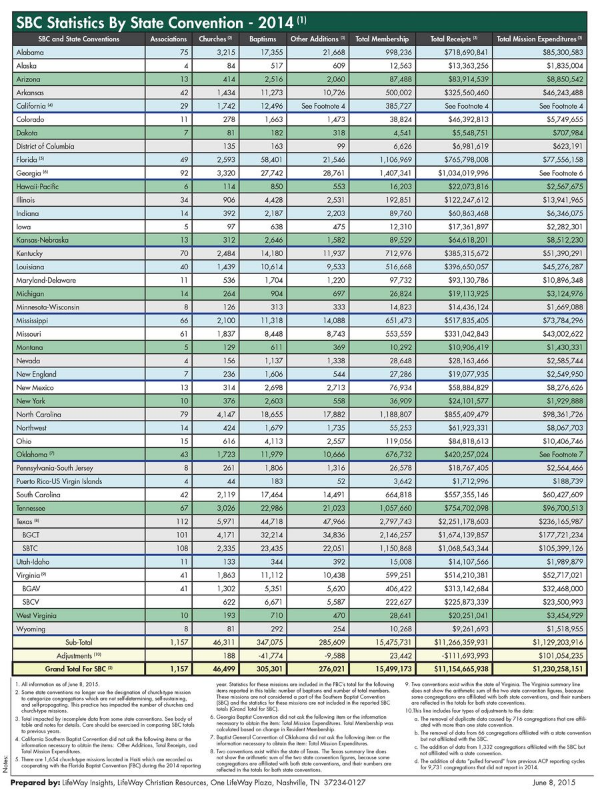 Yes, numbers matter. Sometimes, numbers can be used by God to spur us on to better service. If a community is growing exponentially and the church lives in a silo, the numbers on engagement with the community may show a need to do better.

The reality is that there are likely many small churches who are better engaged and more missional than comparatively larger churches.

Baptisms are perhaps the best indicator we have of life change, yet that is likely a flawed number as well.

There's no ignoring the reality that people were counted when the church gathered in the New Testament. Even prior to the institution of the church, when Jesus would enter a town, perform miracles, teach the people, etc. someone was counting the number of those in the crowd. It was apparently so important that the numbers attending were listed in Scripture.

Though the old scorecard will likely remain for years, another element must be added (or used as a replacement for some of the items counted now) and that is the number of "sent" Christ-followers. For years, we have counted the gathered. Yet, I cannot help but remember Christ's instructions for his followers to pray that the Lord of the harvest would send out more workers.

I am encouraged that many of our SBC churches are seeing this and entering into this story intentionally. Now, it's not new. For years, churches have sent missionaries globally. Churches would start "missions" in unreached areas. What must count today is what counted years ago. We are a sending church, part of a sending denomination. We must remain so.

And Jesus answered him, “Blessed are you, Simon Bar-Jonah! For flesh and blood has not revealed this to you, but my Father who is in heaven. And I tell you, you are Peter, and on this rock I will build my church, and the gates of hell shall not prevail against it. I will give you the keys of the kingdom of heaven, and whatever you bind on earth shall be bound in heaven, and whatever you loose on earth shall be loosed in heaven.” Matthew 16:17-19 (ESV)