davidtarkington.com
Home Archives Subscribe
I Know the Scorecard Has Changed. . .But It's Hard Not to Look at the Old One
David Platt's Speech Clarifies Policies & Goals for Global Missions #SBC15

Identity is Bestowed, Not Manufactured - Jenner, Dolezal & Other Posers Like Me

We all seek validation. There's no one who is immune to this desire. Validation comes from many sources. Unfortunately, many of the sources we often go to for such validation as a man, a woman or even as a good Christian person, are flawed. Because we often seek validation from sources other than the only One who can offer a pure and holy version, we find ourselves performing or behaving in certain ways just to hear "Good job" with the hopes that this form of validation will suffice.

But it never does.

As human beings, both men and women, we have been created in the image of God. This is foundational in understanding the power of identity and validation. Our story starts with God, is about God and ends with God.

"Identity is not something that falls on us out of the sky. For better or for worse, identity is bestowed. We are who we are in relation to others." - John Eldredge & Brent Curtis

We (humanity) have struggled with our identity and proper validation since that fateful day in the Garden of Eden when the liar offered this thought to Eve and Adam - "The God you love. . .he's holding out on you. You cannot trust him."

That lie has permeated our existence ever since.

The enemy isn't creative, and therefore, uses the very same strategies over and over and over again. Solomon was right in so many levels when he declared there to be "nothing new under the sun." 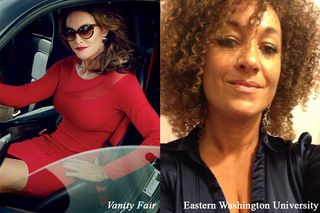 When Bruce Jenner revealed his transformation into Caitlyn a couple of weeks ago, the response was incredible. He is not the first man to declare himself dissatisfied with his gender. He is not the first man to make changes needed to be identified as a woman. He is just the one to do so in this age of the "perfect storm" of gender identification, celebrity worship, sexual "tolerance" and political activism.

Now, in a story that many would say is unrelated, Rachel Dolezal, the President of the NAACP's Spokane chapter has apparently been "outed" as white. The issue is not so much that Dolezal is white, but that she has presented and promoted herself as a mixed-race, black woman for years.

While Jenner's life details have been made available for the public since the 1970s, Dolezal has been known only to a small demographic. No more. Her story is now the lead story on most news and entertainment networks. (I smell a Lifetime movie in the making.)

It Is The Same Story

So, how are Jenner and Dolezal connected? They likely have never met. The Huffington Post and other media outlets are doing all they can to ensure these two stories are not connected. Their personal stories are vastly different. . . yet, the same.

How do I know? I know because this is my story, too. No, I'm not a black man living as a white man. Neither am I a woman living as a man (or a man desiring to live like a woman.) I, like these two have sought validation for years. I seek identity.

Jasmine Holmes recently wrote of this on a blog post for Desiring God She stated:

The gospel shows us not only the root of our dissatisfaction with our place in the world — the sin that separates us from our Father (Isaiah 59:2) — but also the cure for that bitter root (1 Corinthians 15:57). We were created in God’s image, for his glory (Genesis 1:26). That image includes male and female, as well as the beautiful display of diversity that we see in all four corners of the world.

It's an old revival cliche, but it's true. We all have a "God-shaped void within us that can only be filled by Him." Another way to say it is this, "We all seek to hear our Father say 'Well done. You matter to me. I love you.'" The Father has stated this so clearly through the gospel. Jesus is God's validation to us. Yet, we often cannot, or do not, hear that declaration.

The enemy is strategic. He's still throwing the lies toward humanity, "You can't trust God. He's holding out on you." When we believe that, we cannot hear the truth. And we seek to fill the gaps with whatever we can.

Since God alone can offer these, when we miss him, we create our own identity. We become satisfied with weak validation. We become posers.

When Mitzi Miller, former editor for Jet & Ebony magazines, was interviewed about the Dolezal story for National Journal, she made this profound statement:

It’s ridiculous and ironic. Again, I go back to the suspicion that something was really messed up in her life and she had to find a way to cope. Adopting another identity and creating a life out of it was her answer.

As you know, most news stories remain front-and-center for about two days, then everyone just goes about their lives, until the next story comes up to create headlines and social media trends. Yet, those who are part of the story will not be able to just turn the page. How this one ends is yet to be determined, but Miller honed in on the real issue, I believe.

It is not about race.

It is not about gender.

It is about identity.

It is about missing the validation from the author of the story.

As the Father spoke of the Son at his baptism - "This is my beloved Son, in whom I am well pleased," so we long to hear that validation as children of God. We can through Christ. It is not easy to hear that still, small voice in the midst of the screaming culture, but it is there.

God's validation of us is not the same as his affirmation of our actions. Sin grieves the heart of God and we carry that burden, but thanks be to God that we have been redeemed through Christ and no longer are identified by our sin. (Now, that previous statement is for children of God - those who have surrendered to Him and now have the right to call him Father.) So many Christians struggle with this. Even in the world of church and religion, we often pose - seeking validation from pastors, other Christians or church members or maybe denominational leaders.

We must be careful to remain focused. Christianity is not simply behavior modification. It is heart transformation.

So, when you hear these stories of confused people seeking to "find themselves" or attempting to change things in their lives to enable them to live as the person their mind identifies them as, pray for them and remember. . .we have all been there.  The poser lives, but doesn't have to.

But to all who did receive him, who believed in his name, he gave the right to become children of God. John 1:12 (ESV)

So God created man in his own image, in the image of God he created him; male and female he created them. Genesis 1:27 (ESV)