I am currently in Columbus, Ohio, gathering with thousands of family members (that's what it feels like) at the annual meeting of the Southern Baptist Convention. I have been to numerous denominational meetings such as this in the past, but this year, there is a different feel.

I call it a meeting with family members, for that is what it truly is. Baptist brothers and sisters from throughout the land gather together and reconnect with old friends, worship together, make decisions that will impact many through policy affirmations. Like many families, we also grimace at some things said and done by others in the family. It is like being with others over a holiday and then the crazy uncle shows up. We love him, but we never know what he's going to do or say. Every family has that guy. Our SBC has those as well. And, if you can't figure out who he/she may be. . . it may be you.

Since I categorize our SBC meeting as a family gathering, in some ways it has become like the families featured on television reality shows. There is a sense of trying to just be family, but always knowing that the cameras (or in this case, the national news media as well as bloggers, Tweeters and Facebook posters are in the room as well. . .just watching and waiting.)

Personally, I am glad these guests are in the room, either physically or virtually, in that I believe God uses these avenues to ensure we (Baptists) stay on focus, in "witness-mode" and loving to all, even though we cannot be and will not be affirming to all.

On the heels of headlines that bemoan (or celebrate) the decline of evangelicals in America and statements in op-eds like this one have found places in national media outlets.

While the reality is that numbers in Baptist life, such as membership and baptism, are in decline, I have not sensed an overwhelming sense of gloom in our gathering based on this. Ed Stetzer of LifeWay Research continually reminds us that "facts are our friends." It's true. The scorecard that has been used for decades in SBC life has been flawed from the outset and while we all know the numbers we have seen in the past were never truly accurate, as Dr. Al Mohler stated at a Baptist21 gathering, "We've never really trusted our numbers, but we bragged on them when they worked for us."

Yet, in the midst of facing the facts of these numbers, this convention meeting has become one of purpose - a purpose beyond denominationalism.

Dr. Ronnie Floyd has been touring the nation and using social and traditional media outlets to emphasize the need for prayer among Baptists and all evangelicals in our nation. At the outset, a pastor emphasizing prayer sounds uneventful or, honestly, not impactful. The sad reality is that when a SBC meeting adjusts its schedule and shifts traditional sermons, business and other events to open up a prime, evening session for prayer it becomes newsworthy.

More Than a Meeting About Same-Sex Marriage

The Pastors Conference began on Sunday evening and with winsome truth presented by pastors throughout Sunday and Monday, the Spirit of God was challenging messengers (this is the Baptist term for those from local churches who have been elected by their churches to represent them at this gathering) in ways that was needed and still needed so that we may lovingly engage a culture with the hope of the Gospel without fear or hatred.

The news reports have been focused on Dr. Floyd's message on Tuesday morning where statements regarding the nation's proclivity of endorsing and promoting same-sex unions were addressed. For the average reader of the news, one would think that all Southern Baptists do is talk about LGBT people in our families and cities. While these issues must be addressed, this was not the "Anti-Gay SBC Meeting" so many have stated it to be. To be clear, there has been no waffling on the biblical truths and the religious liberties and pending Supreme Court ruling on same-sex marriage has been discussed in numerous venues throughout the week.

However, what is often not reported are the bigger stories and foundational Gospel elements that our family came together around. What has not been reported is the movement of the Spirit of God in a moment of declared repentance and reconciliation.

Some Notable Moments in This Year's SBC Family Gathering

These are moments that I deem as powerful and focus oriented. To be honest, some were moments where God may have spoken more clearly to me than others simply due to my personal journey of faith and the chapter of life where I nowreside.

The Two Most Impactful Moments

Tuesday night's prayer gathering was promoted well. Yet, to be honest, I went in like many of my friends (who were honest with me) expecting . . . well, little. Yes, I confess this sin of low expectation. I confess that I was tired and wondered if it would be worth me staying for this event. . . for I sometimes bristle at "Christian events" that seem to exist just for the sake of being an event.

I knew I needed to do so.

The prayer meeting began and we sang. I would say worship began, but that doesn't necessarily begin just because music starts. Worship did begin shortly after I joined in with the singing. I asked God to speak to me, one of thousands in a room that was much more full than I anticipated (again, I repent of my sin of low expectations.)

One by one, prayers were offered. We followed Dr. Floyd's lead, but it was clear that Dr. Floyd wasn't really the one leading this. God had entered the fray and had taken control. 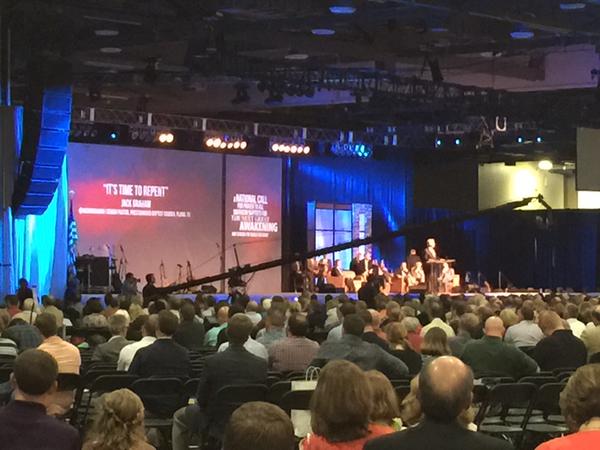 I prayed with a group sitting near me. I had never met them before, but I believe, as I told them, that God had placed us near each other in the room so that we could unite in prayer.

We prayed with and affirmed the prayers of brothers and sisters around us and on the stage. Prayers of confession were voiced. Prayers of repentance were offered. Prayers of reconciliation between the races were stated - this was more than a resolution. Prayers of pleading - asking for healing of our families, for our children, for our nation, for our culture, etc. were placed before God. Prayers for our leaders, for President Obama (YES! Baptists prayed for the President. We asked forgiveness for not doing so and for ignoring the biblical mandate.)

We prayed as we sang.

We believe that prayer works and that God hears our prayers.

We contemplated the reality of the "If. . . then" prayers and realized that God may not doing the "then" portions because we have not been obedient in the "if" portions.

Was this just a meeting? Well, it could be for some, but that's their choice. I believe this is not the end-game, but the beginning.

Together, IMB and NAMB, under the direction of Dr. Ezell and Dr. Platt, respectively, led out in a commissioning service for missionaries and churches (yes - the local churches) who have said "Yes! We will go!"

I was sitting alone in the crowd, but with family as the stories of individuals and couples were shared. Details on the lostness of our world were presented. I was challenged by the strong word given by Dr. Platt regarding the reasons we must be sent and be sending.

I was brought to tears as I thought of the stories before me. Missionaries pictured on the screen were sitting in the crowd. When their names and photographs appeared on the screen, they stood up, holding a Lumio book lamp in their hands, and it became clear - these people are doing the hard things and doing so because they must.

It was powerful. It was amazing. This was more than a simple prayer and a passport.

At the close, under the direction of Dr. Platt, we were challenged to celebrate these who say "YES" more loudly than we cheer for our favorite football team. How can we cheer louder for those who play a game that doesn't matte for eternity than for the God who is sending out his ambassadors into the darkness for a task that holds eternity in the balance? 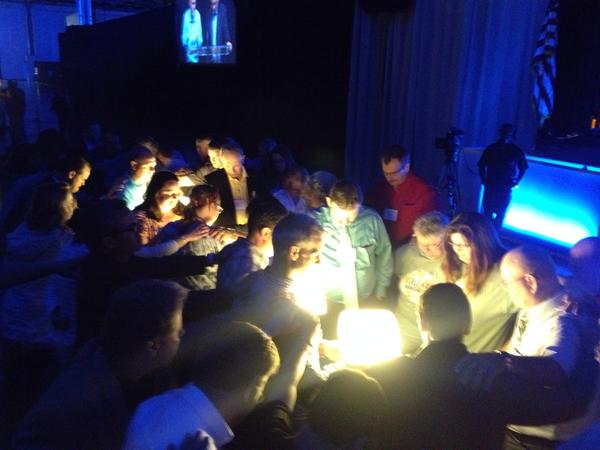 Why Come To These Gatherings?

In the past, people would come to the SBC Annual Meeting to watch or be a part of the latest argument or fight. There are some pretty nasty chapters in our story. Yet, today, even with disagreement from some we find ourselves as Stetzer stated on Monday, experiencing more peace in the family than in recent years.

This is significant, especially in a culture that will continue to marginalize and maybe even criminalize some of the biblical and moral stances we must take.

We are a family (crazy uncle and all) and God has seen fit, in His grace, to let us in on His great story.

That's why I come. This is my family and our Father has much for us.