davidtarkington.com
Home Archives Subscribe
What Florida Baptist's New Executive Director/Treasurer Needs
I Know the Scorecard Has Changed. . .But It's Hard Not to Look at the Old One

Years ago I led our church through a doctrinal study over the distinctives that define us as Baptists. In an age where denominational labels tend to offend or in some cases are avoided at all cost, there is value in knowing and understanding the doctrinal pinnings of one's church. This study led us through our doctrinal statement, known as The Baptist Faith & Message (2000.)

Article I of our statement of faith reveals our understanding of the inspiration and value of the Bible. The article expresses this as follows:

The Holy Bible was written by men divinely inspired and is God's revelation of Himself to man. It is a perfect treasure of divine instruction. It has God for its author, salvation for its end, and truth, without any mixture of error, for its matter. Therefore, all Scripture is totally true and trustworthy. It reveals the principles by which God judges us, and therefore is, and will remain to the end of the world, the true center of Christian union, and the supreme standard by which all human conduct, creeds, and religious opinions should be tried. All Scripture is a testimony to Christ, who is Himself the focus of divine revelation.

As we dug into this teaching on the value of Scripture, it becomes confusing to some, especially in the English-speaking world, as to which version of the Bible should be used. There are some who believe the only valid version to be read, studied and preached is the Authorized King James Version. While I am not one to discount the value of the tried and true KJV, primarily because I grew up, like many of you, reading and memorizing passages from this version. It's a beautiful version and yet, it is often hard to follow due to the changing vocabulary and different meanings of English words from the 1600s to now. As an American with friends from Great Britain, I find that phrases we use have vastly different meanings to them, and vice versa.

Some have asked why there are so many modern English translations. The simple answer relates to money. Each publishing house tends to own the rights to its own modern translation. Therefore, since Biblica owns the rights to the very popular New International Version, it stands to reason that Broadman & Holman would rather own it's own version for publication, as would Crossway and other publishing houses.

Yet, it is more than a business decision. Sometimes, there are decisions made by translators that seem less connected to history or the oldest documentation and more to swaying with the cultural shifts of the day.

A movement has continued to grow that seeks to delete all masculine references to God throughout Scripture. On the surface, this may seem to be insignificant.

"It's more inclusive," some would say.

"It's less offensive to those who have difficult relationships with men, especially their earthly fathers," is declared by others.

So, in this age where gender and sexuality are the unavoidable subjects through the media and the amoral revolution continues to occur, I find myself going back to a previous teaching on the value of Scripture and the use of non-gender neutral versions. (The original post from January 2011 may be read here.)

A number of churches are also intentionally moving away from using gender-specific terms. This was printed in a church's bulletin recently and ended up on Twitter. I wish I could say I am surprised, but this is little more than the next step down a slippery slope. 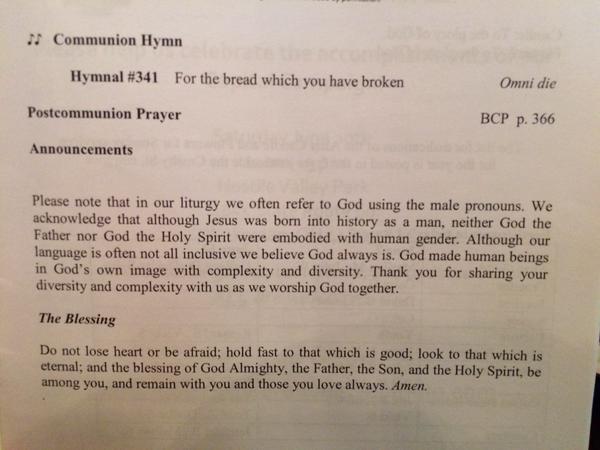 Why Does Gender in the Bible Matter?

It is my assertion and belief that gender matters in life and therefore within the Bible. Regarding Bible translations, it matters at a deeper level than most realize.

In an article posted a number of years ago by Wayne Grudem and Vern Poythress and The Council for Biblical Manhood and Womanhood (full posting here,) the writer touches on some of the most common translation questions and issues:

In Greek the word aner usually has the sense of husband or man (male human being).3 Until recently, English translations included the male semantic component in translation. But the new gender-inclusive translations show some changes.

In Acts 1:21 Peter discusses the replacement of Judas: "Therefore it is necessary to choose one of the men (aner) who have been with us…" (New International Version [NIV] 1984). But in the New International Version Inclusive Language Edition (NIVI 1996) and in the New Living Translation (NLT 1996) "men" becomes "one of those" (NIVI) or "someone else" (NLT). The change is theologically significant because it no longer conveys in English the Greek evidence that Peter did not think that a woman could be an apostle. In Acts 20:30 Paul warns the elders at Ephesus about false teachers: "Even from your own number men (aner) will arise and distort the truth…" (NIV). Indirectly Paul indicates that the elders were all men. This theologically significant detail drops out in the New Revised Standard Version (NRSV 1993), NIVI, and NLT.

The common thread in the verses above is that they all involved situations where males were examples of larger principles. This is not to denigrate females, for both male and female are made in God's image, unique and special. It was, however, descriptive of the role of the men within the early church.

Another translation issue revolves around the Hebrew word 'ish.

Consider the translation of 'ish. It almost always means "man." It can be used in idiomatic constructions with the sense "each one" (e.g., 1 Chron. 16:3, Job 42:11). The main problem is that gender-inclusive translations eliminate male marking in other passages where they have no lexicographical warrant.

Consider Psalm 1:1, "Blessed is the man who does not walk in the counsel of the wicked or stand in the way of sinners or sit in the seat of mockers" (NIV). NRSV, NIVI, and NLT change it to read, "Blessed are those who…," or a similar phrasing. The change from singular to plural produces a description that is "less specific…, less easy to visualize." Moreover, with the singular, the reader tends to picture a single man standing against a multitude of wicked people, sinners, and mockers.

After reading Psalm 1, sensitive readers know that it offers the "man" as a representative, an ideal, for men and women. The principle applies to many. But the starting point is the picture of one, and that one is male. The semantic component as well as grammatical gender is present for the original readers.

The gender-inclusive translations simply eliminate this semantic component. They contain a formulation that expresses the general principle of equity, and that is part of the point. But they drop one aspect of the meaning, by not expressing the subtle interplay between a male representative on the one hand, and a general principle applying to both men and women on the other.

The writer speaks of the more traditional usage of the word man to describe the entirety of the human race. This, now is not considered politically correct or tolerant.

The biggest issue in removing gender from Scripture is the elimination of the word he.

How do we treat generic "he" in English? Matthew 16:24-26 says, "Then Jesus said to his disciples, ‘If anyone would come after me, he must deny himself and take up his cross and follow me. For whoever wants to save his life will lose it, but whoever loses his life for me will find it. What good will it be for a man, if he gains the whole world and forfeits his soul? Or what can a man give in exchange for his soul?'" (NIV)

The verses contain several occurrences of generic "he," referring back to "anyone." Some people find this usage distasteful, so the NIVI eliminates it: "Those who would come after me must deny themselves and take up their cross and follow me. For those who want to save their lives will lose them, but those who lose their lives for me will find them. What good will it be for you to gain the whole world, yet forfeit your soul? Or what can you give in exchange for your soul?" Singulars are converted to plurals, third person "he" becomes second person "you."

The arguments for eliminating gender is both explicit and implicit. There's no neutral ground in this movement for neutrality. The most dangerous issue is when the meaning of Scripture is warped from poor translators. Though some declare that "all translation is interpretation" the end result is the justification of already held beliefs when seeking affirmation. In other words, it fuels the fire of those who are set on their beliefs, and then seeking to find a verse or passage that affirms their already held beliefs. If the verse is taken out of context, so be it.We've seen this done numerous times. If the verse is mistranslated, all the better. Why? Because the truth in these cases is not that Truth is sought, but justification. This is a dangerous slide.

The NRSV substitutes plurals for the generic singulars found in Greek and in the NIV. But this results in an unintended ambiguity in the product. The last clause, "make our home with them," has a plurality of people, "them," combined with a single dwelling place, "our home." Conceivably, it might mean that the Father and the Son make a home with each person. But it might also mean that the Father and the Son make a single home with the plurality of people together. That is, they come and dwell with the church corporately. This latter interpretation is closer to the surface or more "obvious" than the first, since it responds to the difference between the singular "our home" and the plural "them." Such a thought of corporate dwelling is genuinely biblical (see 1 Cor. 3:10-15, Eph. 2:22). But it is not the thought found in the Greek text of John 14:23. Both the Greek and the NIV picture the Father and the Son making a dwelling with each person, not with the church corporately.

Gender neutral Bibles weaken the Word. They represent poor scholarship at a minimum and the conformation to cultural sensitivities. Do the masculine pronouns really matter? I believe they do, but not because men are better than women or that we are insensitive to the plight of those who have had terrible experiences with men in their lives. They matter because they signify the deconstruction of God's Word which will inevitably end for some with a Bible that looks like Swiss cheese, with holes throughout and passages that only align with our previously understood realities.

The introduction of mainstream gender-neutral Bibles was little more than a foreshadowing of removing gender tags within the church (for some.) The cultural influence within the church is immense and while "neutral" may be the stated goal, "neutered" is the end result of a church that abandons the truth of God's Word.

RELATED: Interview with Dr. Mohler Regarding the Need for Christian Counter-Culture

Listing of Gender-Neutral English Bible Translations (Not a complete listing)