The Pope vs. The Donald

It seems like a reality show, but that shouldn't be a surprise. Our culture has embraced the reality show and ratings over the past few years prove this to be true. The race for the Presidency features celebrities (regardless how these men and women desire to describe themselves, they are now celebrities) vying to be the last man or woman standing in this version of Survivor.

There are tribal councils (we call them debates, but as any debate coach would tell you, these really aren't debates) where many candidates seem to be voted off the island following the event. Now, there's no host quenching a torch here, but when poll numbers come in after these events, the number of participants on the stage dwindles. So far, the Republicans have lost the JV and others from their large tribe. The Democrats have lost members as well.

Eventually there will be a tribal merger with only two candidates left - a Republican and a Democrat (and a bunch of independents and smaller party representatives, but as history shows, they really have no chance to win.)

This week a surprise element entered the story. This would be akin to a "very special episode" of a television show. 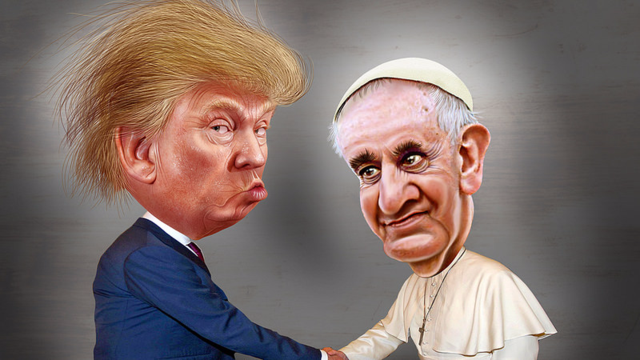 The surprise element in this race is Pope Francis. As head of the Catholic church, the Pope was asked his opinion on Donald Trump (the Republican front-runner) as a candidate and his plans if elected President of the United States.

"A person who thinks only about building walls, wherever they may be, and not building bridges, is not Christian. This is not the gospel." Pope Francis

That quote set off a firestorm. The Pope apparently declared that Donald Trump is not a Christian. And, surprisingly, this offended people, even The Donald.

The networks are loving it! Because...ratings.

"The pope said something to the effect that maybe Donald Trump isn't Christian, okay? And he's questioning my faith, I was very surprised to see it. For a religious leader to question a person's faith is disgraceful." - Donald Trump

Now, softer responses are coming out from the Trump camp and even from the Catholic church. But, that doesn't really matter. The story is taking off and the question of "What is a Christian?" is now, once again, making headlines.

The internet and media are exploding with opinions regarding the divide. Republican Catholics who support Trump are frustrated with the Pope. Moderate Catholics who oppose Trump are celebrating the Pope. Evangelicals who do not view the Pope as the leader of the church, much less the voice of Christianity, are cringing that these discussions are happening. Non-believers don't care about the divide, but wonder why others do. Opponents to Christianity just shake their head and state that this is just another story about the idiocy that is Christianity.

Basically, everyone is offended.

And the reality show continues on.

The big difference between this reality show and the ones funded by the networks is that this one really matters. It's not just a game. This is much more serious.

What Is a Christian?

And, bigger and more important than the political fallout is the question that has come to the forefront - "What is a Christian?"

Many followers of Jesus Christ are now being asked this question. Friends, family members, coworkers and even fellow students and acquaintances are asking the question. What's needed is the answer.

This is when the reality show really matters.

This is when it's more than a show, but reality.

Are We Prepared to Respond?

Are we ready to respond?

I am agreeing with Scripture alone.

So understanding this, we must be prepared with the answer that is being sought (and most are not really seeking the true answer, but be diligent.)

But in your hearts honor Christ the Lord as holy, always being prepared to make a defense to anyone who asks you for a reason for the hope that is in you; yet do it with gentleness and respect. 1 Peter 3:15 (ESV)