davidtarkington.com
Home Archives Subscribe
Reflections from a Wedding
Why There Is No Good Option In This Year's Election

It is the time when many around the world become fans of sports they never watch at other times, and sometimes didn't even know existed. The Rio Olympics are garnering large viewing audiences and even with all the controversies surrounding Zika, green diving pools, drugged up Russians, jailed Olympic athletes, and NBC's decision to air women's gymnastics after the event actually happened, there have been some really incredible stories. Here are just a few...

Seriously! I was talking to my mother a couple of weeks ago and she said "Michael Phelps is going back to the Olympics. I wonder if he will be able to compete at his age (the ripe old age of 31) as he did in the last Olympics?" Well, that question has been answered and once everyone figured out why he had circular bruises all over his back (I thought the Salt Vampire from Star Trek got to him) he, at this writing, has earned his 21st Olympic gold medal.

Let that sink in for a moment.

I remember when Mark Spitz's feat was deemed unmatchable and when Carl Lewis' 9 gold medals seemed amazing! Well, those accomplishments still are, but seriously - 21 gold medals. At this point, Jason Momoa should retire and Phelps should play Aquaman in the new Justice League movie.

Have you heard of this gymnast? She's 41 years old and competing in the Olympics! She is representing Uzbekistan.

Yeah, she has competed in seven Olympic games. She has a 17-year-old son. She has a son who is older than US gymnast Laurie "Human Emoji" Hernandez.

I'm not cheering for Uzbekistan, but I can't help but cheer for Oksana.

Another US swimmer. Katie has won 3 medals at this point (2 gold and 1 silver.) This 6', 19-year-old has an infectious smile and is dominating in the pool.

There will be more stories to hit the headlines and men and women who are basically unknown now who will become nationally and internationally known in just a short time.

Like I said, there are many sports in the Olympics that I never really watch or follow, but every four years find myself becoming a fan. One such sport is men's synchronized diving. These guys are incredible athletes, but honestly, this has never been a sport I've followed. It's definitely not a "money-sport" for local colleges and universities. Yet, a few days ago, I was watching this as two American athletes competed for a medal.

The Chinese team won gold. They tend to dominate in the diving competitions. They are amazing.  They jump off the platform, spin in mid-air and then, go into the pool without even making a splash, it seems. I made bigger splashes throwing pieces of bread into ponds for ducks to eat when I was a kid. 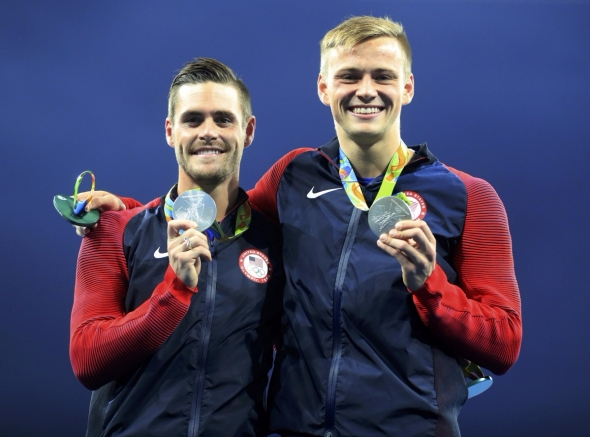 The American duo of David Boudia and Steele Johnson (that may be the best name of any Olympic athlete) earned the silver medal. Their dives were incredible. It is obvious that hours and hours of practice go into perfecting these skills. Yet, it wasn't the diving or even the medal win that made these guys different. It was the post-dive interview. When asked by NBC reporter Kelli Stavast what it meant to medal in the synchronized event, David said...

There's been an enormous amount of pressure. I've felt it. It's just an identity crisis. When my mind is on this [diving], and I'm thinking I'm defined by this, then my mind goes crazy. But we both know that our identity is in Christ, and we're thankful for this opportunity to be able to dive in front of Brazil and in front of the United States. It's been an absolutely thrilling moment for us.

The way David just described it was flawless – the fact that I was going into this event knowing that my identity is rooted in Christ and not what the result of this competition is just gave me peace ... and it let me enjoy the contest. If something went great, I was happy. If something didn't go great, I could still find joy because I'm at the Olympics competing with the best person, the best mentor – just one of the best people to be around. God's given us a cool opportunity, and I'm glad I could come away with an Olympic silver medal in my first-ever event.

And that was aired live on NBC. Clear, concise, and not cheesy. Full article on Christian Examiner here.

Boudia has been speaking openly of his faith in Christ for years and even co-authored a book with Tim Ellsworth, Greater Than Gold.

In the midst of an event that places people on the international stage, David and Steele stated a clear reality that every person faces. Identity. When one's identity is founded on what one can do, there will come a day when that activity will end. Even the 41-year-old gymnast will eventually retire from competition (we think.) David and Steele may never compete in an Olympics together again, yet at this moment, David spoke truth that hopefully will resonate with all.

I was encouraged by these men's words. This was deeper than just quoting Philippians 4:13.

I am still not really a synchronized diving fan, though I will watch. I must say that I am a fan of these guys, though. Congrats!