davidtarkington.com
Home Archives Subscribe
Keep Shuffling Along, Even When Others Mock You
Is God a White Racist?

We launched our second year of GameDay Church on September 11. This church service/event in the parking lot of EverBank Field prior to the Jaguars - Packers game drew a crowd and allowed us to engage in gospel-centric conversations with those walking by and hanging out at our tailgate event. Being that it was September 11, I felt that addressing the fifteenth anniversary of the tragic day of terror that hit our nation was appropriate.

Here is a transcript of my message on 9/11 with reference to Matthew 9. Thanks to Jon Wood, our campus minister at IslandChurch for the story regarding the Eagles - Redskins football game. 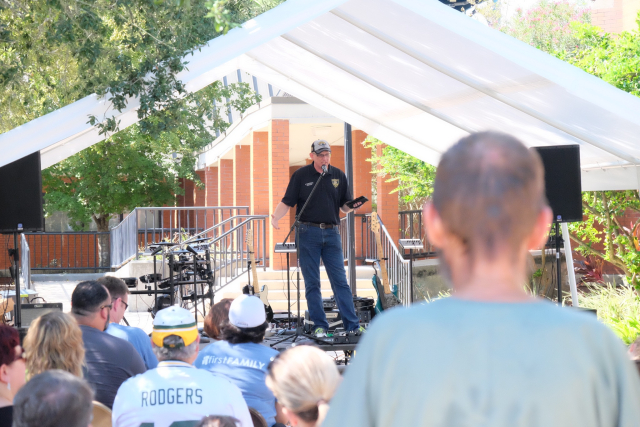 A few years ago there was an NFL game scheduled on a Sunday, but rather than a 1pm start, this one started at 2pm. That’s strange, but not the strangest thing about this game.

The game was being played between the Redskins and the Eagles. Philadelphia was out of the playoff hunt, but they were looking to play the role of spoiler. The Redskins were sitting at .500 and were in a position to squeak into the playoffs, but needed the win.

The game began with the Eagles taking an early lead.

The Redskins took advantage of a Philly turnover and scored in the second quarter, to tie it up at 7 apiece. Not really an offensive game so far.

The game continued on and the fans who remained in the stands to watch what became a very sloppy game did so because, they’re well…fans.

The Eagles ended up turning the ball over more and the Redskins won. The game ended as most everyone thought.

And once the game was over, no one cared.

That game was over about 5pm and because of the way news spread at the time, the things happening globally that day became known by the fans and players by the end of the game. The announcer at the game, it’s is said, began asking some of the fans in the stands to report to certain areas immediately.

America was divided at the time. Can you imagine a divided America? It was severe. Many thought the war was dumb and we shouldn’t bother or get involved. Others thought we must. Then, the Japanese attack on Pearl Harbor happened and there was no longer a valid option of sitting on the sidelines. America was thrust into World War II.

Those men who were called out of the stadium were active-duty military personnel. They were now at war. More would join. The entire nation would engage, even on the home front.

Fifteen years ago, another day began, just like every other day. People got up, had their coffee, went to work and then planes hit towers, a plane hit the Pentagon and one even crashed in Pennsylvania. The news reports were horrendous and clear.

We now live in a post 9/11 world now and are reminded of that even as we enter EverBank today for the game. The metal detectors and bag searches are now normal.

Going to the airport and flying is different than it used to be.

We have a "new normal" because of these horrendous acts.

In these cases, the changes were brought on by attacks and terrorism. But, there are moments in life that are also unexpected, that lead to more positive and encouraging life-change.

In the Bible, there was a man named Matthew. He was a Jewish man, but not liked by his people. He was considered a sell-out. He was working for the occupying nation in his homeland by collecting taxes from his peers.

And, in those days, tax collectors were known to, and even expected to, fleece the people to pad their own pockets. The Roman government (the occupying one) didn’t care how much the native collectors gathered in taxes, as long as they had the amount Rome wanted. So, any extra they could get was for themselves.

So, Matthew goes to work on that day – just another day – nothing special expected, but something special did happen. Something he never saw coming.

As Jesus passed on from there, he saw a man called Matthew sitting at the tax booth, and he said to him, “Follow me.” And he rose and followed him.And as Jesus reclined at table in the house, behold, many tax collectors and sinners came and were reclining with Jesus and his disciples. And when the Pharisees saw this, they said to his disciples, “Why does your teacher eat with tax collectors and sinners?” But when he heard it, he said, “Those who are well have no need of a physician, but those who are sick. Go and learn what this means, ‘I desire mercy, and not sacrifice.’ For I came not to call the righteous, but sinners.”Matthew 9:9-13 (ESV)  [1]

Look at what happened. Jesus, the Son of God, intentionally went to a guy that the religious people, the neighbors, and others in the community did not like and would avoid if possible. Jesus went to him. He met him at his place of business, in his own comfort zone and offered him a chance at new life.

He said, “Follow me” which seems like the shortest invitation ever, and it was, but coming from Jesus, it was clearly strategic.

Matthew didn’t expect this, but was overwhelmed with the invite. “Me? Follow you? Seriously?” and he did.

Matthew became one of Jesus’ twelve apostles, one of his closest friends. He, like the others in Jesus group of close friends, would later be described as one of the men who was turning the world upside down, for good.

Everything changed and on this day, it changed for the better.

We can all relate to the 9/11 change, especially if you’re old enough to remember it. Some of us may remember Pearl Harbor, but at a minimum, we’ve read about it or watched the videos about it. We understand how those moments can change everything. And some of us here have a Matthew story – we understand how Jesus surprises us and changes everything. When we least expected it.

And maybe some here today will experience this. It’s just another Sunday. It’s another football game. It’s the start of the season. There was a day much like this last season and the season before, etc. But, today, you’re here and maybe, just maybe, Jesus is still doing what he did 2000 years ago. He’s meeting you when you least expected it and saying “Follow me.” Now, you get to decide to follow him or not.