davidtarkington.com
Home Archives Subscribe
Is God a White Racist?
Pastors, Politics, and Pot - What Should a Pastor Say Regarding Current Issues?

Do You Remember When Religious Freedom Was a Right?

Oh, I know it's still in the US Constitution, but as I watch the cultural shift continue, it is clear that this thing we, as Americans, know as religious freedom will be viewed differently in the near future. As a reminder, or as a revelation for those who do not know, the first amendment to our Constitution is listed below:

Congress shall make no law respecting an establishment of religion, or prohibiting the free exercise thereof; or abridging the freedom of speech, or of the press; or the right of the people peaceably to assemble, and to petition the government for a redress of grievances.

I don't see the amendment being repealed, though that has happened with other ones in our past, but I do see a reinterpretation of the right coming. There are things that have historically been covered under this amendment as religious freedom, but may likely be eliminated.

Just to be clear, this post is not about tax-exempt status for churches and religious entities (which, in my opinion, I see likely going away as well.)

I am not seeking to be a "doom and gloom" guy. I'm not on the rooftops screaming at everyone as they drive by. I'm not wearing a sandwich board that states "The End Is Near." Those stereotypes tend to rise to the surface in times like these. I tend to think of myself as a realist and one who can discern the times.

Earlier this month an article by Michael Gryboski was featured on the Christian Press site. The story is titled "LGBT 'Shame List' of Christian Colleges Includes Azusa Pacific, Biola, Liberty, Wheaton." This is a story that others have referenced in recent weeks. Baptist Press ran a similar article, highlighting the great number of colleges, universities and seminaries related to the Southern Baptist Convention (full disclosure - I pastor an SBC church, have graduated from an SBC seminary, and currently attend a different SBC seminary for further study.) 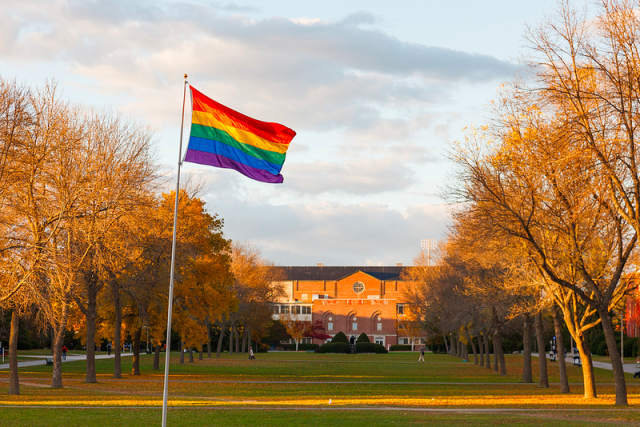 The Shame List is produced by Campus Pride and is advertised as a resource for young people and parents seeking schools that do not discriminate based on gender or sexual orientation. The site's description of the list is below.

The Shame List identifies the “absolute worst campuses for LGBTQ youth” in the United States. The colleges & universities listed have chosen to openly discriminate against LGBTQ youth and have requested Title IX exemptions to perpetuate the harms of religion-based bigotry.  The criterion to be the “absolute worst” campus includes either of the following: 1) Received and/or applied for a Title IX exemption to discriminate against LGBTQ youth and/or 2) Demonstrated past history and track record of anti-LGBTQ actions, programs and practices.

The Title IX exemption is the key element in the creation of the list. For most Americans, Title IX has been celebrated as the rule that created equal athletic opportunities for women in university settings. Parents of young girls have traditionally viewed this rule as a positive as it has pushed colleges and universities to create more women's sports and to push more money toward these "non-revenue" sports. Without Title IX, it is likely that the NCAA would not have the Women's Basketball Tournament, names like Pat Summitt, Diana Turasi, Mia Hamm, and Mary Wise would not be as well known and women athletes likely would have less opportunities.

However, Title IX is also the umbrella that leaves colleges and universities open to having to affirm lifestyles and actions that are polar opposites to their religious groundings, statements of faith, and belief systems.

With the culture blurring greatly the line between male and female, it is only a matter of time before funding for financial aid (FAFSA) to predominantly religious institutions of higher learning becomes the element used to force (or seek to force) the abandonment of religious convictions in the area of gender.

Campus Pride is clear in their desires. I actually appreciate the forthrightness in the organization's leaders. There is no doubt as to their purpose in existing and their modus operandi. However, I disagree greatly with their focus and stated beliefs. That, too is my right.

So, I'm not seeking to shut down their site or discredit their organization. I am disagreeing and seeing the reality that is now and to come.

The LGBT revolution, which is actually an extension of the sexual revolution of the 1960s, has effectively pushed toward governmental policy and law changes. As the nation collectively watches North Carolina suffer from the loss of funds due to their statewide bathroom policies, it is clear that step-by-step, that which was considered unmovable and an inalienable right to believe a certain way will soon shift in the public forum

The LGBT rights people have effectively equated their suffering to that of people of color who led to the passing of the Civil Rights Act of 1968. Yet, I have many African-American and minority race friends who find that comparison offensive.

Nevertheless, the "Shame List" is out and most all schools listed are religious in nature and affiliated with Christian denominations. Nearly one-third of the 100 plus schools are affiliated with the Southern Baptist Convention.

President Jason Allen of Midwestern Baptist Theological Seminary in Kansas City had this response to having his school placed on the list:

"Regardless of what shaming -- online or otherwise -- may come, our convictions remain unchanged and our calling undeterred: we will winsomely, yet boldly, speak the full complement of Christian truth on this issue and every other issue to which the Bible speaks. And we will humbly point all, including Campus Pride, to Jesus as the only one who saves.

As we train our students, we seek to equip them to minister in a broken world, marred by human sinfulness and its consequences, including those harmed by the false promises of the sexual revolution. The good news is that Jesus Christ came so that whoever believes in Him -- gay or straight -- might be saved, and have their sins forgiven and their life transformed. That is the message Midwestern Seminary preaches and the message to which our students are giving their lives to declare."

The purpose of the shame list is ultimately lead Americans to not only not enroll, but to label and place these schools in a position where the title "haters" is most prominent. As I look over the list, there are schools listed that I would be proud to attend and have my children attend. At the same time, Christian or not, there are some that I would never attend or recommend. Yet, even in the cases of those I would not attend, there seems to be something lost when the right to hold to religious convictions is deemed hateful and evil.

There are hundreds of colleges and universities that would be on the other end of the spectrum for Campus Pride. In fact, they also publish a list known as the "Best of the Best" for LGBTQ students. The list includes state universities and predominantly liberal-leaning schools, which is not surprising.

It is a sticky situation. Most Christian students attend state universities. If Christian teenagers are effectively discipled and prepared to contend for the gospel (see Galatians 1) then attending such a university is not only a financially sound decision, but missionally focused one as well. Unfortunately, many students in our churches are not contenders and have and will fall prey to unbiblical teaching and liberal philosophy at the university level. These concerns include but go deeper than LGBT identification.

There are many students who discover their perfect fit for higher education not at the public university, but at a smaller, biblically-focused school. There are varied reasons for this. Sometimes it is academically based. Sometimes it is a chance to play sports at the college level (that was me). Sometimes it is simply the door that God is opening for His glory.

The Shame List will lead many to just shake their heads wondering how we have come so far. For me, it's no surprise. In fact, how did we not see this coming? The days are not only coming, but are here. Religious liberty will be redefined and dumbed down. Some of these schools on the list may not be in existence in ten years. Others will refuse any federal financial aid and their costs will lead to needs for private donations and scholarships and ultimately a decreased student population. Still, others will capitulate and disavow their long-held religious convictions. This will be deemed as progress, but regress is more like it.

As my friend Christopher Yuan said based on this story "This is the beginning of the end of religious freedom."