Much has been reported over the past few years regarding police officers, race, violence, justice, and injustice. To discount the issues facing our nation and especially those in the black community would be not only a disservice to a significant demographic group, but to all people. Yet, as we all know, negative news spreads quickly while good news stories sit on the back burner on some back page of Facebook and social media and often goes ignored.

Our town of Orange Park covers just over three square miles. While the community is much larger than the town limits, Orange Park is fairly small. Within the borders of our county, the Clay County Sheriff's Office serves well. In our municipality we have the Orange Park Police Department.

Though only a three-square-mile area, there are many people who live in the town limits and thousands who travel through daily. To put it plainly, this bedroom community of Jacksonville, Florida is busy.

Cops and the Community

Over the past year or so, our Police Chief, Gary Goble, has led the department to host "Coffee with a Cop" encounters at local coffee shops and restaurants. I was talking to him earlier in the year (I serve as the volunteer chaplain for the OPPD and OPFD) about these events. These are organized gatherings where members of our community have the opportunity, in a relaxed atmosphere, to get to know the men and women behind the badge. The event is promoted with this description - "No agenda or speeches, just a chance to ask questions, voice concerns, and get to know the officers in your neighborhood!" 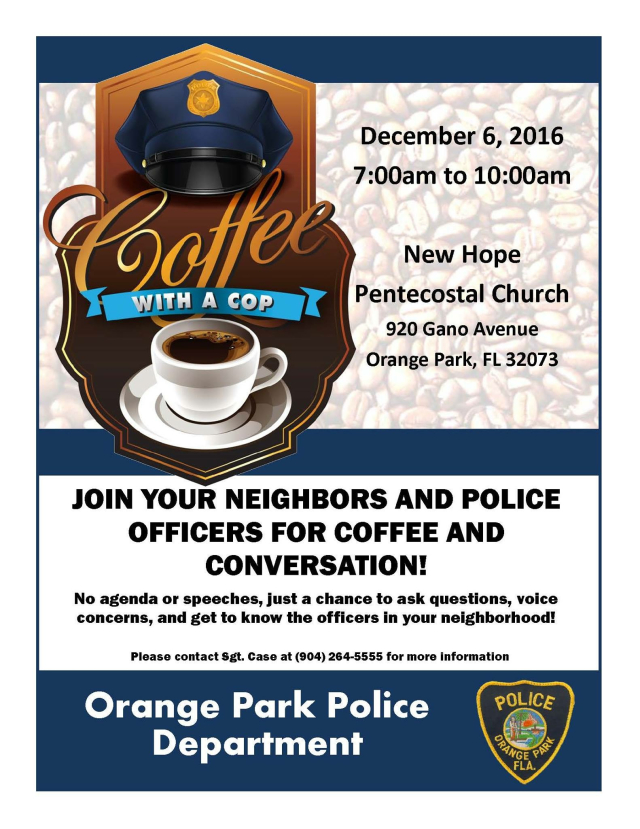 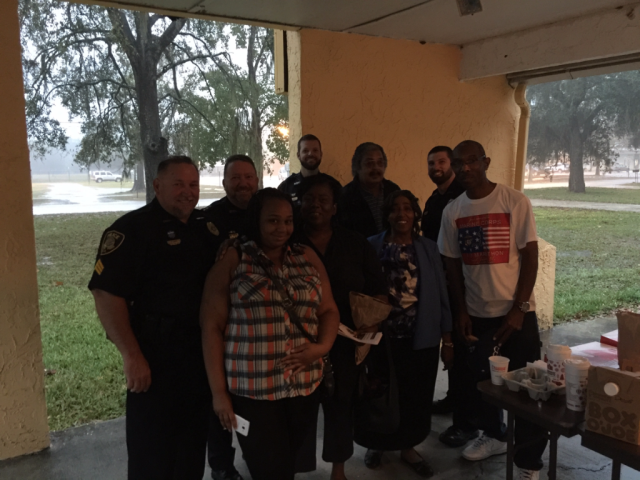 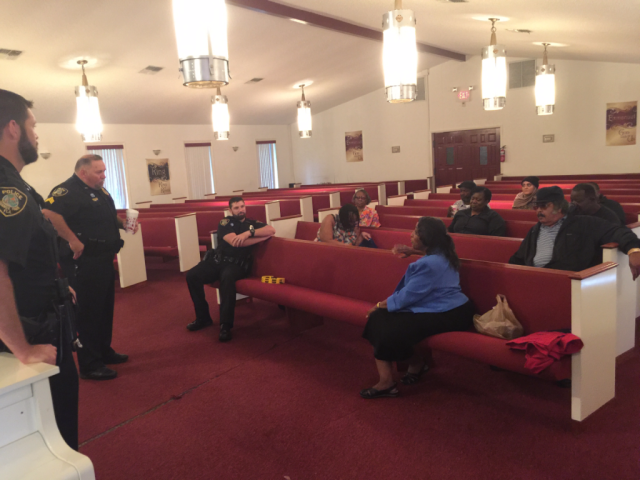 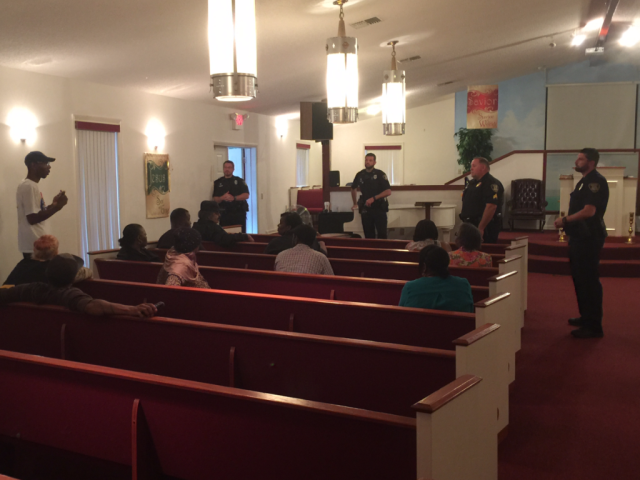 Today, we hosted a "Coffee with a Cop" gathering in the community near Grove Park Elementary School. The pastor and membership of New Hope Pentecostal Church were gracious enough to be our hosts as we set up a table with free coffee and doughnuts (okay - here's the cop and doughnut joke, but seriously...who doesn't love doughnuts?)

We had the tables set up outdoors underneath the church's overhang.

As would be the case, after weeks of no rain in our area, today we experienced a rain storm. It was torrential for a few hours. Yes, during the scheduled coffee time, but we pressed on regardless.

Despite the rain, people from the community arrived. The community where we hosted this has a predominantly African-American population. As we drank coffee, told jokes, and shared stories of Orange Park, we soon moved into the church's worship center where members of the community were given opportunity to ask questions of the officers.

The honesty was refreshing.

When People Fear the Police

Men and women in the community shared that many fear the police and that much of that fear is based on what has been seen on the news and viewed on social media. Whether fear is founded or not does not remove the reality that it exists.

One man asked "If our children are pulled over by an officer, what should they do? They're scared and with the stories flying around out there, we want to give them wise instructions. But, there are so many stories. What do we say?"

That was a great question.

Moms and dads and younger people in the room nodded their heads in agreement and sought insight from the officers.

The officers present gave practical, step-by-step instructions that would be protocol for anyone pulled over. The fact of the matter is when the blue lights flash in our rear window, stress levels increase and fear is often common. Since I am a 48-year-old white man, I will not even pretend to understand what a young black man would be experiencing in today's culture. It would be insulting to do so. Yet, the officers answered honestly and well.

I will offer this from today's meeting - that one question led to others and the conversation was rich and valuable.

Relationships Are the Key

As the conversation continued, the overall feelings expressed were those of appreciation from the community to the officers for offering the opportunity to talk and be honest. That appreciation went both ways as the officers were deeply grateful for the attendance of those (even in the rain) to come and talk.

This won't be the last "Coffee with a Cop" and I echo what one man stated today as we closed. He said, "Trust is built on relationships. We know you as people, not just as police officers. You know us as people. That's the key. The law is the law and we know that and appreciate that. We just have to keep building relationships."

What a powerful and correct statement!

Is this a perfect community? Of course not. There are citizens seeking to live well and do right. Then, as one lady mentioned today, "There are criminals around here, too" and that is true. It's true in every community. That speaks of the depraved hearts of humanity.

I'm thankful for a police department that is committed to the law they have vowed to uphold, but who also love this community enough to "serve and protect."

Many communities have such gatherings following a tragedy. As I talked to one of our neighbors at the event today, we discussed how we pray that no tragedy hits our community, but that we will have these gatherings now and continually. We'll be better off, safer, and stronger.

And...who doesn't want a free cup of coffee and a doughnut?