davidtarkington.com
Home Archives Subscribe
PASTORS: Watch Out for This Scam
Worldviews And the Divide Over LGBT Rights

The Problem with Unconditional Forgiveness

I have been teaching on Wednesday evenings this month on biblical forgiveness. You'd think this would be a basic study, but I'm discovering how many Christians and those, like me, who have been raised in churched families have missed some fundamental truths regarding forgiveness. The fact is that all of us come to this concept of forgiveness with preconceived ideas of what is right and fair. When someone questions that which we have held to be true for decades, there may be pushback.

And there has been.

This is not uncommon, but has opened up opportunities for discussion.

I threw out a teaser prior to beginning the study that caused some questions and ultimately led people to want to attend.

I made a statement related to the living church members of the Charleston, South Carolina church who stated that they forgave the murderer, Dylann Roof for killing their family and fellow church members. I stated that while the offer of forgiveness was right and honorable, to unconditionally forgive Roof is actually unbiblical.

That statement caused some to question.

Perhaps they thought I was calling into question the motives of those who offered forgiveness. I was not. In fact, change the story to any other incident where an unrepentant individual was offered blanket forgiveness by the offended or others. I would say the same - that form of forgiveness is not biblical.

As I have studied the Scripture and read works by authors such as Chris Brauns and sermons by men like Milton Vincent, I am convinced that while we are commanded as Christians to forgive others as Christ has forgiven us, to equate that forgiveness to be unconditional actually waters down the gospel and opens the door for universalism. 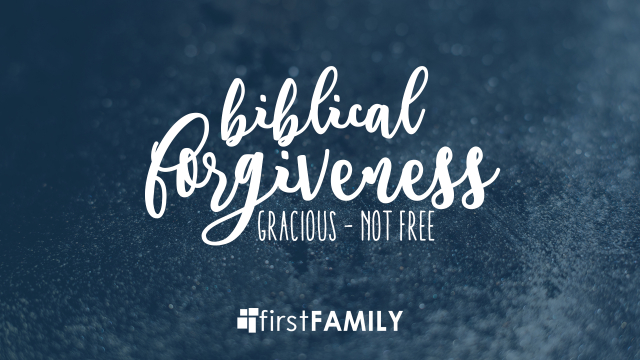 Does God forgive everyone?

Simple question, but according to Scripture the answer is NO. God does not forgive everyone. Some live their entire lives never surrendering to Christ and seeking forgiveness of sins. God is prepared to forgive. It is an offer, but it is an "if...then" offer.

If we confess our sins, he is faithful and just to forgive us our sins and to cleanse us from all unrighteousness. 1 John 1:9 (ESV)

If we confess, or repent of our sins, he forgives. The central character of any forgiveness story is not self, but God. He created forgiveness.

Otherwise, everyone's sins are forgiven and ultimately...everyone gets to heaven. That's not Christianity. That's universalism. It feels good, but it eliminates the consequences of sin and the value of God's holiness and love.

Why is this such a hard concept for even Christians to grasp? It is due to a centeredness on self and a idea of "fairness" that does not find biblical anchors. Even I have told people in the past that their forgiveness of others was really more about self-healing than releasing others of guilt. Sounds good, but that statement leans more toward therapeutic help than biblical truth. For that I repent.

I have posted the first two sessions on forgiveness on our website here and will post the third later this week. As stated earlier, no original material from me. Mostly gleaned from Brauns and Vincent.

So, from Chris Brauns' book Unpacking Forgiveness (highly recommended) here is the "TRUE OR FALSE" test I offered to our group two weeks ago. See how you do.

Here's more from Brauns on each point...

DEALING WITH THESE BIBLICALLY

Unpacking forgiveness is like relocating a family. While you may move on a particular day, unpacking takes a lot longer.

There are some excited about learning more of biblical forgiveness, but others who dread this. There is fear that you will find out what you ought to do and it won’t match what you want to do.

There are profound disagreements about forgiveness among pastors and counselors. Forgiveness is biblical. It is right. No question there. Remember that the choices you and I make regarding forgives shapes much of our lives. That’s why we must consciously work out what you believe about forgiveness and then intentionally put those beliefs into action. It is a process.

How can you know what is right when there are so many opinions being voiced? Examine the Scripture.

Now these Jews (Bereans) were more noble than those in Thessalonica; they received the word with all eagerness, examining the Scriptures daily to see if these things were so. - Acts 17:11 (ESV)

More noble because they examined the Scriptures for truth.

Most people answer “false” to this.

We have mixed our definitions and created a false theology with this.

The Bible is full of true stories of people who were not forgiven by God.

Revelation speaks of what happens to the unforgiven.

Matthew 18 – about discipline and conflict resolution.

There are times when good people just can’t resolve differences. What do you do?

Some say that is a wrong statement. We’ll see why it is not.

The bodies of the three teenage girls murdered by a fellow student at Heath High School in West Paducah, Ky., were not yet cold before the students of the Christian prayer group that was shot at announced, "We forgive you, Mike," referring to Michael Carneal, 14, the murderer.

This immediate and automatic forgiveness of a murderer is not surprising. Over the past generation, the idea that a central message of Christianity is to forgive everyone who commits evil against anyone, no matter how great and cruel and whether or not the evildoer repents, has been adopted by much of Christendom.

The number of examples is almost as large as the number of heinous crimes. But one other recent example stands out. In August, the pastor at a Martha's Vineyard church service attended by the vacationing President Clinton announced that it was the duty of all Christians to forgive Timothy McVeigh, the murderer of 168 Americans. "I invite you to look at a picture of Timothy McVeigh and then forgive him," the Rev. John Miller said in his sermon. "I have, and I ask you to do so."

The pastor acknowledged: "Considering what he did, that may be a formidable task. But it is the one that we as Christians are asked to do."

Though I am a Jew, I believe that a vibrant Christianity is essential if America's moral decline is to be reversed, and that despite theological differences, there is indeed a Judeo-Christian value system that has served as the bedrock of American civilization. For these reasons I am appalled and frightened by this feel-good doctrine of automatic forgiveness.

CHRISTIANS MUST ALWAYS HAVE A WILLINGNESS TO FORGIVE OR AN ATTITUDE OF FORGIVENESS, BUT THIS DOES NOT MEAN THAT FORGIVENESS ALWAYS TAKES PLACE.