Putting a Stop to the Youth Exodus in the Church

For the past few years, church leaders and evangelicals have been lamenting the loss of younger people in the church. While some new church starts and mega-box churches have seen growth in seeming success in reaching the younger generation, the statistics show a loss overall. Much has been written about this and most hearkens back to Pew Research Center's 2015 report. While that report is two years old, it is likely no significant changes have occurred.

Generational labels differ based on what study is cited or book read, but by and large, the Millennials (born between 1981 and 2000) and Generation Z/Boomlets (born after 2000 ) are trending away from the church. There's not as much data regarding Generation Z, but the older portion of the generation are in high school and graduating this year.

This generation has been described this way (from MarketingTeacher.com):

Religious “nones” – a shorthand we use to refer to people who self-identify as atheists or agnostics, as well as those who say their religion is “nothing in particular” – now make up roughly 23% of the U.S. adult population. This is a stark increase from 2007, the last time a similar Pew Research study was conducted, when 16% of Americans were “nones.” (During this same time period, Christians have fallen from 78% to 71%.)

Overall, religiously unaffiliated people are more concentrated among young adults than other age groups – 35% of Millennials (those born 1981-1996) are “nones.” In addition, the unaffiliated as a whole are getting even younger. The median age of unaffiliated adults is now 36, down from 38 in 2007 and significantly younger than the overall median age of U.S. adults in 2014.

Yet numbers can be confusing and sometimes do not tell the full story. In a 2016 article, Pew reveals the factors leading the growth of "nones" in the US:

What Can the Church Do?

Normally, at least it has been my experience, when data like this surfaces, churches and denominations react, rather than respond. In many cases, the exodus of young people comes as a surprise, all too late. Parents who had faithfully attended church, signed their children up for every program and event from AWANA to DiscipleNow, youth camp, mission trips, etc. wonder where they went wrong when the now adult child seemingly walks away from church with no intent of coming back. In the past, churches would say (well, not out loud, but it was a predominant thought) "Just wait until they get married and have kids. Then, they'll come back to church." Maybe that was true a generation ago, but it doesn't seem to be now. The fact is that young parents who just attended church and were entertained as teenagers seem to find more community in social networking sites, school activities, athletic endeavors for kids, and other areas and church is not avoided...it just never come across their minds.

Yet, all hope is not lost.

Reaction is not the answer, but godly response is.

What we are facing is not new. Have you ever read the Old Testament? When you read Moses' commands to the next generation in Deuteronomy 6 regarding the passing on of truth to the next generations, there is a since of fear in his words. The fear is that unless the family teaches of God, models worship in the home, and remembers the covenant past with God, the kids and grandkids will not only forget, but walk away. The journey away from God is not without consequence.

What faithful parent or grandparent of a prodigal hasn't shared similar lamentation in prayer?

Since trends tend to raise awareness, let's look at observable trends of those who have not abandoned the faith.

Jon Nielson, Pastor of College Church in Wheaton, Illinois, recently shared an article highlighting some of the trends he has personally observed of faithful Millennials and young adults (full article here).

Walker Moore of Awe Star Ministries developed a model of student ministry years ago where students led. The gifting of "significant tasks" to students for the health of the ministry allows God to work in and through young people at levels where the "come into the youth room and wait for the adults to feed you" model never will.

So, what can we do? We can remember. God has not abandoned young adults and teenagers. And, God is not through with the older generations, either. It's not like all the Boomers and Gen Xers are believers, right?

I'm not pessimistic when I read the statistics. I'm actually happy that the scales are now falling off our eyes. Sure, many are walking away, but it's not too late. We (the church) are now being forced back to Scripture and the model is clear. Disciple-making is our commission. It begins in the home, not the church building. Family equipping discipleship is more than a model. It's a biblical command (Deut 6).

I believe God is recalibrating our focus. While we may be as fearful as Moses, the hope we have in Christ remains. So, don't lose heart.

Posted by David Tarkington on February 21, 2017 at 11:08 AM in Hot Topics for Churches, Leadership, Parenting, Student Ministry | Permalink | 0 comments

The Danger of Living in an Echo Chamber

Last year's election cycle revealed what many of us already knew - echo chambers exist and it's easier to see that others live within them and difficult to acknowledge when we do.

What is an "echo chamber?"

The practical definition is an enclosed space where sound reverberates...or echoes.

In this aspect, however, we are not speaking of physical sites where sound reverberations can be heard, but social sites, mostly online, but not limited to that.

The Washington Post ran an article last year titled "Confirmed: Echo chambers exist on social media. So what do we do about them?"

In Christine Emba's report, she shares results from social scientists on the reality of such chambers.

The study focused on how Facebook users interacted with two narratives involving conspiracy theories and science. Users belonging to different communities tended not to interact and tended to be connected only with “like-minded” friends, creating closed, non-interacting communities centered around different narratives — what the researchers called “echo chambers.” Confirmation bias accounted for users’ decisions to share certain content, creating informational cascades within their communities.

Recently, one of my online friends who holds vastly different views politically, socially, and theologically, shared a story online that was opposite my view on many levels. We discussed the views cordially and I shared the reality that the views espoused were simply echoes of others. The concept of living in an echo chamber is a reality, and I am not immune either.

The Echo Chamber of Politics

Social scientists and political scientists have studied the surprising (to some) results of last year's US Presidential election. As results came in where states were colored either blue (Democrat) or red (Republican) to indicate Electoral College votes, our news showed the county-by-county vote totals of our state, Florida.

I would not be surprised to see other state breakdowns to show similar results. Here are Florida's results (screenshot from The Guardian) 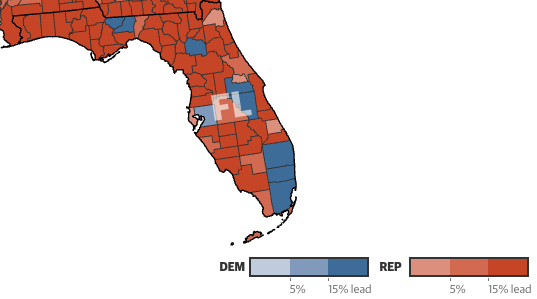 Screenshot from The Guardian

For the most part, the blue counties are where large universities are located (FSU, UF, UCF, USF, UM, FIU, FAU, etc.) They are also the locations, other than Alachua County, of urban areas in our state.

This is no surprise in that many students in university settings are challenged intellectually regarding their belief systems and sense of fairness. It seems that over the decades, many of our universities have embraced a humanist worldview that leans left ideologically, politically, and theologically. This is not news.

However, I am not saying that individuals abandon their convictions and beliefs just because they enroll in college. In fact, no university populace is homogenous (well, except for Saturdays in the fall during football season) in their beliefs or support of ideologies. Yet, it is true that many students find themselves exposed to a worldview that sees things vastly different than the one experienced growing up under parental authority once at college.

It is at this level, the echo chamber develops.

And it is not just in the liberal, humanistic worldview world.

Just in case it's misunderstood, I'm not saying that the red candidate's voters were not in echo chambers. They were, too.

I am just pointing out how so many who leaned left were surprised at the election results primarily because they were trapped in an echo chamber. The same has been proven true for other sides over the years.

No one is immune.

As Christians, we must guard against the echo chamber as well.

Dr. Albert Mohler, President of The Southern Baptist Theological Seminary shared this in The Briefing from August 4, 2016 in a story about Roger Ailes and Fox News:

But as we’re thinking about the entire question of this media ecology, there are two other issues that thinking Christians should keep in mind. This has to do with the echo chamber and what is known as confirmation bias. One of the great risks to all of us, whether of the left or the right, Christian or non-Christian, is that we will situate ourselves within a cocoon in which we hear no dissenting voices and no contrary arguments. This is probably, to be honest, more a problem for liberals than conservatives in terms of the print media because of the dominance of the liberals in major newspapers and editorial boards. But on television Fox News largely leveled the field, and now there is the risk that anyone of the left or the right or any other perspective can spend 24 hours a day listening to nothing but the echo of one’s own political positions and the bias of hearing confirmation of what one already believes.

This is where Christians need to understand the discipline of forcing ourselves to hear contrary arguments in order to understand evangelistically and apologetically the worldview of those who may not agree with us on so many issues. The political and moral—the worldview divide in America is now so deep that we can cocoon ourselves and hear almost no one who disagrees with us.

Some fear that even listening to dissenting political or ideological opinions flies too close to "the appearance of evil" but I hearken back to Paul's encounter at Mars Hill. To lovingly engage those far from God with the Gospel leads us out of the echo chamber (which for Christians can be filled with empty "Amens" on social issues apart from biblical foundation.)

If you check my Twitter account, you'll see that I follow many people. Many of those I follow view the world through a lens (a worldview) vastly different than the biblical one I do. They hold to beliefs of Scripture that I do not. They argue in favor of things that I believe are evil and wrong or at best, short-sighted. Yet, I "follow" them. To be clear, just because I follow you online, does not mean I agree with you.

Yet, to be clear, as a Christian I must spend the bulk of my time in God's Word when it comes to having a biblical worldview. Apart from the Gospel, I have no valid discourse with those who are pre-Christian.

Winning debates is not the goal.

Posted by David Tarkington on February 04, 2017 at 11:18 AM in Current Affairs, Hot Topics for Churches, Politics, Religion | Permalink | 0 comments