davidtarkington.com
Home Archives Subscribe
Putting a Stop to the Youth Exodus in the Church
Five Things We Did In Church That We Don't Do Anymore

The lack of creativity in Hollywood has been spoken of in various venues over recent years. While it may not be waning creativity on the part of the filmmakers and artists, it does not take long to realize that remakes, sequels, and re-imagined stories of old seem to fill the "Coming Soon" lists from Hollywood. If not a lack of creativity, it certainly is a somewhat safe financial plan for the production companies.

The children of the 80s and 90s reminisce of days gone by as they find themselves forced into "adulting" (apparently, that's a word now.) For the Gen Xers, this explains the "GI Joe," "Transformers," "Dukes of Hazzard," "21 Jump Street" and "Chips" movies. For Millennials, perhaps this is why live action versions of Disney cartoons are such a big hit. In some cases, as with "Alice in Wonderland" and "Cinderella," the original animated films were made decades prior to the birth of the Millennial generation. Yet, it was when these young adults were children that Disney began to "unlock the vault" on occasion and release these classics on VHS. How many young twenty- and thirty-somethings grew up with those bulky plastic cases strewn around the room as they watched their favorite films over and over and over? As a parent, I remember these films being worn out and while "Robin Hood" was incredible, a man can only take so much "Bibbidi-Bobbidi-Boo."

A Tale As Old As Time

The internet and media outlets blew up last year when it was announced that a live-action version of the newer classic Disney film "Beauty and the Beast" would be developed. Early clips shared online revealed that Emma Watson was to play Belle and the film was to be, in some cases, a scene-for-scene live version of the animated classic. Watson was cheered as the new Belle. The rose in the early trailer was celebrated online as just a glimpse of the new film began to elicit positive buzz.

Even when Angela Lansbury, one of the stars of the original, shared her confusion as to why the film was being made and clearly wasn't a fan of the endeavor, it was clear to those watching the industry, the film would be a huge hit and make millions. Disney is banking on that. In fact, that's the answer to Ms. Lansbury's question. 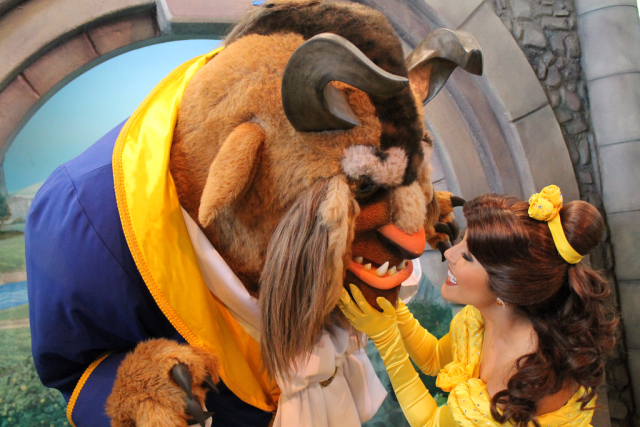 The marketing has been systematic. Disney definitely knows how to do this and with marketable tie-ins such as the races at the Magic Kingdom and new dolls already on the market (though the Belle doll did get some pushback with claims it looked less like Emma Watson and more like Justin Bieber). Make no mistake, this film will rake in the bucks and many will celebrate the music, acting, reminisced childhood, and message.

It has changed a bit from the original.

Belle is more liberated, it seems. She's an inventor now, as is her father. This was revealed a few weeks back. Most read that and thought "No big deal."

Yet, last week another revelation was shared by Disney regarding their new film.

Since this is an updated re-telling of the "tale as old as time" or at least as old as the early 1990s, the writers and directors have taken the opportunity to insert a sub-story into the plot revealing that one of the characters is actually gay. This story truly blew up the internet last week and continues to be shared online and through entertainment "news" television shows and media outlets.

To the Christian with an eye on culture, this should be no surprise.

When the online push to make Elsa a lesbian in the Frozen sequel began, it became inevitable that Disney would step even more intentionally than in the past into the LGBT revolution. Some have declared this to be the first gay character in a Disney production. That actually is not true. The Disney Channel show "Good Luck Charlie" depicted a lesbian couple as parents of a friend of the main character. The Disney produced television show "Once Upon a Time" on the Disney-owned network, ABC, presented familiar characters from film as outed lesbians in April 2016. Yet, the difference here is the fact that the upcoming film is marketed to families.

The protagonist in "Beauty and the Beast" is Gaston. His sidekick is LeFou. In a recent Washington Post article by Elahe Izadi, the following is stated:

In recent years, Disney has increased the racial and ethnic diversity in its stories, and has made strides to reimagine female characters as fully formed protagonists rather than simply damsels in distress.

But there have been calls among some for children’s entertainment to portray same-sex relationships as well. Last year, a Twitter campaign asked Disney to make Elsa from “Frozen” a lesbian character in the movie’s sequel, inspiring the hashtag #GiveElsaAGirlfriend.

A few Disney movies have left viewers wondering about the orientation of characters, with allusions to same-sex relationships. “Zootopia” featured Bucky and Pronk, two male antelopes who live together, bicker like a couple and share a common last name. An episode of the Disney Channel show “Good Luck Charlie” included a character who had two moms.

But the live-action “Beauty and the Beast” will bring an overt depiction of a gay man to the big screen.

This has been called a watershed moment for Disney.

The culture celebrates the seemingly progressive step in this upcoming film. However, not all parents are excited. Many who planned to relive their childhood with their own kids while watching the film together in the theater are now questioning if they should. For some, it is the frustration that they may be forced to address an issue of sexuality with their children in a way they did not plan or desire to do.

Nevertheless, some will celebrate the opportunity to share the normalizing of such things. This is the cultural revolution in full swing.

To be clear, while turning a beloved animated film into a live-action movie is intriguing, I am not a fan of the subtext in this one. There are no accidental messages in such multi-million dollar presentations. There never have been.

Movies are made to make money, but in the process are not made in a vacuum. Movies (even the ones in the $2 bin of DVDs at the store) present a worldview. It's inevitable. It cannot be avoided. Christians have struggled with this reality for decades. And, surprisingly, not all Christians agree about movies. For generations, Christians were declared bad and sinful in the church-subculture if they ever went to a movie. Now, churches produce films intended to be shown in the multiplex.

So-called "faith based" films pop up. Some are good. Most are bad. Many create online debates. Ever heard of "The Shack"? Wow! That hot-mess of messed up trinitarian presentation is causing more confusion and frustrated Christians than even the bogus heaven-tourism flick "Heaven is for Real."

Dr. Albert Mohler recently shared thoughts on this film on The Briefing and as followers of Christ in the midst of a worldview shift, his words are wise and should be considered.

But we also have to note that when we laugh at something and when we find something interesting and, not to mention, entertaining, effectively our thinking will become aligned with our hearts. That’s exactly why Hollywood is ground zero for so much of the change driving the moral revolution around us. But there is something even more ominous in all of this, and that’s this. We’re not here talking primarily about the effect upon adults, adults’ eyes and ears and minds and hearts, we’re talking about entertainment with an agenda, an agenda to reach eyes and ears and hearts and minds directed at children, and very effectively so.

I guess most of us suspected that it was only a matter of time before some film directors said something like,

“It is a nice, exclusively gay moment in a Disney movie.”

But now we know that that time is now. It may not be surprising, but it truly is shocking.

It's really not about "Beauty and the Beast" or the LGBT revolution. That's just the clear issue on the front-page today (it will be old news in about a week). It is about living with a biblical worldview as ambassadors for Christ in a world that rejected him.

Declaring loudly all that we are against will likely not lead to engaging conversations about the Gospel. However, ignoring the blatant worldview shifts seems to lead many to live isolated from the mission.

Oh, and please don't fall into the "It's just a movie" or "It's fiction, enjoy it" groups. Nothing is ever just anything. The story is much larger and the mission becomes even more clear.

The Real "Tale As Old As Time"

The "Tale As Old As Time" is truly about a battle and a rescue. It did not start in a castle with a beast and some talking dishes. It began in a garden. Actually, it began prior to that. This tale includes beauty, deception, rebellion, shame, death, rescue, and life.

Christians must be wise and understand the times. As for the characters in the latest Disney film, they are not real, but they represent the depravity of humanity clearly. Perhaps this is why people are so drawn to the stories.