davidtarkington.com
Home Archives Subscribe
Is Wednesday Really a Church Night?
The Prevailing Religion of the Day

When Graduation Becomes a Protest

Students are putting on ill-fitting mortarboards and unattractive robes as symbols of accomplishment throughout our nation. It is that time of year where high school students receive their diplomas and college and university students are honored with their degrees.

Commencement ceremonies, with all the pomp and circumstance, are wonderful events. They bring families and friends together for a time of celebration. For many parents of college students, the moment feels like their boss just gave them a raise (that is if they were paying for their child's schooling.)

Yet, as we now know with our cultural and sexual revolution in full-swing, no public gathering will take place without a worldview divide revealed. Division has always existed among people, but the lines have shifted most recently and dramatically, at that.

Politics is divisive by nature. It always has been. Yet, now more than ever in the US with President Trump's administration in place and the Republican led House and Senate, the dividing lines seem to be painted more boldly. Of course, it may be due to the vast increase of media outlets online and the mostly left-leaning mainstream traditional news outlets. Thus, the battle for the news, whether it be real or fake.

Recent incidents have revealed the political and social worldview divide on the public stage. Recently, graduates from Bethune-Cookman University loudly protested the introduction of commencement speaker, Secretary of Education Betsy DeVos.  The disruption at the ceremony led the university's president to threaten cancellation of the ceremony with a promise to mail the degrees to the graduates. Secretary DeVos was allowed to continue her speech at that point. (Story here.) 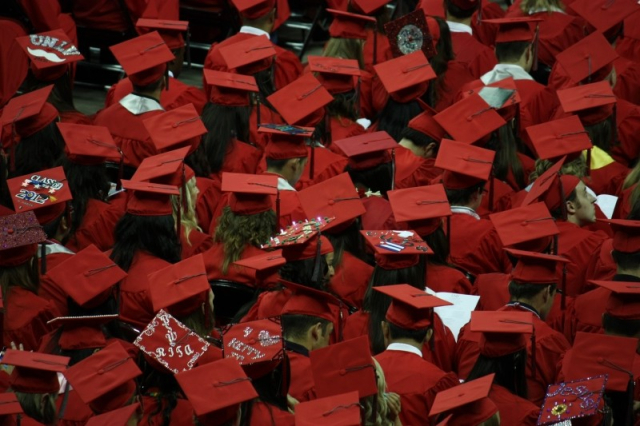 Most recently, the most popular Roman Catholic university in the United States, Notre Dame, held it's graduation ceremony. It too made headlines based on a student protest. Vice President Mike Pence was the guest speaker and when introduced, a large crowd of students stood and exited the room. It was noticeable and captured on video to be shared globally. News agencies picked up the story and while it was unprecedented, it was far from surprising.

Why the protest of Pence?

News sites have numerous interviews with students and seem to be leaning on two stories as to why the protest occurred. One has to do with Pence's position in the Trump administration. Therefore, President Trump's immigration policies among many other things, were being protested by the students.

The other issue had to do with Pence's positions on family, marriage, abortion and LGBT views that were center-stage when Vice President Pence served as Governor of the state of Indiana. Pence's views and opinions on these issues have not shifted and that is the problem.

It's strange, however, that the public views and policies of the Vice President actually line up with the stated views of the doctrines of the Roman Catholic church and therefore, of the University of Notre Dame. Yet, it is at this university where a divide was viewed most clearly. That is what makes this even more intriguing. If this protest took place at the University of Florida, Florida State University or any other publicly funded university, there would be no story. But, this was at a religious university, affiliated with the Roman Catholic Church.

“Of course we welcome and support free speech on campus,” Mr. Miranda (Luis Miranda - a 29-year-old masters graduate who walked out - DT)  said. “But commencement is not a moment for academic exchange or political dialogue. It’s a celebration of all of our hard work.”

Mr. Miranda added that Mr. Pence’s role in graduation was particularly unsavory for some students and their families — including gay people and immigrants — who might have been hurt by the policies favored by the Trump administration.

Protest organizers estimated that more than 100 people had walked out. On social media, many could be seen wearing rainbow pins or flags, which were also hung from windows around the campus as a symbol of gay pride.

And there it is.

A few things stand out to me, but primarily, as a parent who has funded one university graduate's complete tuition and fees and currently is doing the same for another, the statement that the commencement ceremony is "a celebration of all our hard work" reeks of self-centeredness. But, who can blame him. In a culture where child-worship begins at birth and lasts through adolescence into young adulthood, this is expected.

While I do not know Mr. Miranda, nor do I know how he paid for his education, I do feel it safe to say that the majority of graduates have experiences from childhood through elementary, junior high, high school and college that reveal others along the way who supported, provided and sweat along with them for this special day. Of course, I understand that the student is the one receiving the degree. The study, work, and testing was done by that student and it was and is hard. Believe me, I'm back in school as well.

Nevertheless, a self-centric focus that states that the event is "all about me" is asinine and wrong.

Mr. Miranda's family may applaud his protest. I just wonder how many other parents of students who walked out felt betrayed, not by the commencement speaker (even if they disagreed with Mr. Pence greatly) but by their student for daring to do what they did? Truth be told - I have one child who would likely want to walk out as did the protestors at Notre Dame, for the very same reasons. I would disagree with just about every reason. Betrayal would be one feeling that would surface.

It's a mixed bag. I'm sure some were heralded as bold while others were chastised by loved ones.

Yet, the point is clear - we live in a divided culture. Is it more so than in the past? That's hard to determine. We didn't live in the past with the age and experience we now have. Yet, historical analysis reveals that our dividing lines are pretty unique. The sexual and LGBT revolution have determined such.

I think back to my graduation from the university. It was a big deal. I finally made it. However, do you know what I don't remember?

I don't remember who the commencement speaker was. Neither do I remember what he or she said.

I do remember that I didn't walk out.

Of course, I'm sure my speaker wasn't as politically connected or globally popular. Nevertheless, I graduated and my wife and parents were there with me. They celebrated along with me because my walking across that stage in Denton, Texas was as special a moment for them as it was for me.

News stories like this come and go. They get shared on social media. Radio and television talking heads dissect the details. Christians get caught up in the stories as well and the danger is to not become that negative stereotype that blasts the younger generation. Seriously - being that old guy standing outside yelling "get off my yard" to the next generation is not the model we should follow.

Yet, as Christians, we must see things for what they are.

Worldviews matter. The sexual and moral revolutions in our culture have and are happening at breakneck speed. It's evident in these graduation ceremonies. More things like what happened at Notre Dame will happen and will eventually not make the news - because it will be so common.

Christians are forced with hard questions of faith and biblical truth. When the dividing lines have been drawn (regardless who drew them,) on what side do those who seek to follow God's Word stand?

Loving people is not up for a vote. It is a mandated command from Christ. Nevertheless, love does not mean total absolution of biblical truth. In fact, it means just the opposite. Love does not mean affirmation for sin. This is the challenge of the church—how to love God, love people, and make disciples of Christ without compromise or becoming the negative stereotype that those on the other side of the divide are devising?

It is possible. It is happening. One protestor held a sign that said "Love Trumps Hate" with obvious intonations toward the President. Even in the snarky protest, the truth is on that placard. Love does trump hate. Love does win. Just not the version of love that culture defines.

The win is found in the Gospel—the Good News. The good news is that God loves. So. Very. Much. And that love through Jesus Christ gives us hope. That love is not self-centric. That love is God.

For God so loved the world, that he gave his only Son, that whoever believes in him should not perish but have eternal life. John 3:16 (ESV)