davidtarkington.com
Home Archives Subscribe
Southern Baptist Vote on the Alt-Right & Racism Overwhelmingly Passes - Now What?
How Can I Rest When So Many Are Lost?

Steve Gaines to Nominate J.D. Greear for SBC President in 2018 - That's How I Heard It

The Southern Baptist Convention Annual Meeting concluded yesterday with quite a bit of public media attention and continued talk of what is next in the SBC.

Steve Gaines, Pastor of Bellevue Baptist Church in Cordova, Tennessee was reelected for a one-year term as President. He has done a fine job in leading our denomination this past year, and especially through a challenging annual meeting.

I am thankful for his leadership and service to our convention, not just this year but in years prior. I will continue praying for him as he remains on the national stage, not only as pastor of a significant church in our denomination, but as our President this next year.

If  you remember the SBC Annual Meeting in 20116 that took place in St. Louis, there was quite a bit more drama regarding the presidential election of the denomination. Of those nominated, a virtual tie resulted between Pastor Gaines and Pastor J.D. Greear of Summit Church in North Carolina. Messengers were scrambling to get back into the meeting room for ensuing votes and rather than a sense of unity among messengers, a growing sense of division was developing.

I was unable to attend that meeting in St. Louis, but was watching online via livestream. Based on tweets from friends and messengers and conversations with those in the convention center, the feelings of disunity were growing.

The Meeting Between Gaines and Greear

It has been shared numerous times, and once more this year at a Baptist 21 Luncheon on Monday. At seemingly the exact same time, in two different locations as these men prayed alone and with family, they each decided to recuse themselves from the election - allowing the other to win the nomination.

Dr. Danny Akin, President of Southeastern Baptist Theological Seminary shares that he was in the room when the men met together. Dr. Gaines shared he would be stepping away from the nomination and allow Dr. Greear to be nominated. Greear responded with appreciation and the instruction that Gaines could not do that because he had come to the same conclusion and would recuse himself.

This moment that would not have happened in our denomination about three decades ago between nominees was vital, inspiring, and needed.

J.D. Greear stepped out of the race and Steve Gaines won the presidency of the SBC in an amazing moment of unity before our messengers, our churches, and the watching world.

God's timing is always perfect and this has proved to be true once more.

Unity Is a Continual Challenge

To be unified is challenging. It takes strength and focus to remain together for the sake of a cause. In this case, the cause is the most vital in the world - the Gospel. We just experienced an attempt from our enemy to divide our churches at this year's SBC meeting. (Read about that here and here.)

The Baptist 21 Meeting This Year

In the Baptist 21 meeting on Monday much was discussed about the current status of the SBC. This meeting took place a day prior to the resolution issues regarding the Alt-Right and racism, so that discussion was not center stage, yet. Nevertheless a candid discussion on numerous issues where culture and faith intersect occurred. The discussions featuring a panel discussion with Steve Gaines, Albert Mohler, Danny  Akin, Russell Moore, J.D. Greear, Matt Chandler, Kevin Smith, and Jedidiah Coppenger. At one point the moderator, Coppenger, asked about unity and last year's SBC presidential situation. 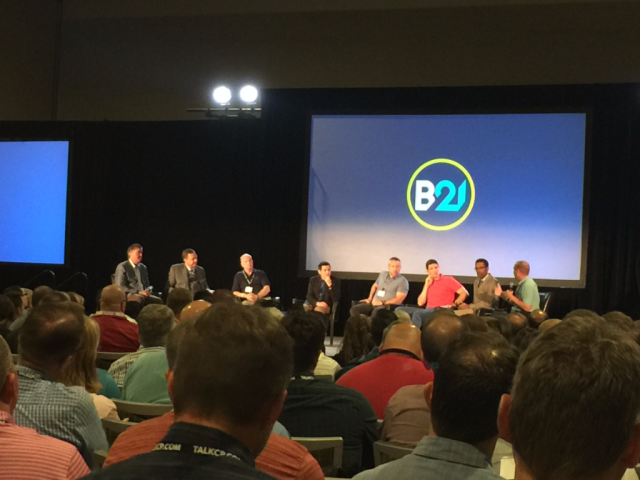 As the discussion and recounting of the events of last year were covered, Dr. Gaines mentioned that he would be excited to nominate J.D. Greear as President of the SBC in Dallas in 2018.

I heard him say this and thought "Wow! This is a huge step for our convention."

There is obviously no animosity between Gaines and Greear. For Dr. Gaines to proclaim his desire to nominate Greear next year stated clearly to those in the room and no doubt other Southern Baptists who have grown accustomed to seeing Baptists divided, that we are unified for a larger cause than self.

I look forward to an official announcement to come, likely early next year regarding Greear's nomination. As far as I know, Greear has not stated whether or not he will run again, but I believe he would serve the SBC well.

Our Southern Baptist family is just that - family. Our Heavenly Father has chosen to use us for His glory and we graciously move forward unified in the Gospel.