davidtarkington.com
Home Archives Subscribe
How Can I Rest When So Many Are Lost?
Dear Young Pastor and Church Planter...Listen!

So Paul, standing in the midst of the Areopagus, said: “Men of Athens, I perceive that in every way you are very religious. For as I passed along and observed the objects of your worship, I found also an altar with this inscription: ‘To the unknown god.’ What therefore you worship as unknown, this I proclaim to you." Acts 17:22-23 (ESV)

The story of Paul's engagement at the Areopagus, or Mars Hill, reminds us that the message of the Gospel is not just to be held privately, but strategically taken to those in need of redemption through Jesus Christ.

While there have been many advancements regarding technology and industry in the centuries since Paul spoke to these ancient people near Athens, not much has truly changed. Humanity remains depraved and in need of rescue and redemption. The Gospel remains true. God's church continues to move forward under the mandate of the Great Commission as we go through life to engage others with the message of truth.

When I was a boy, I loved reading and collecting comic books. When I had saved up enough change (from that quarter a week allowance) I would ask my parents to stop by the 7-Eleven on the way home from church in Montgomery, Alabama so I could peruse the comic book stand for the latest issues featuring my favorite heroes. This was no comic book shop. There were no plastic bags with acid-free boards for storing the magazines. The rack was metal, spun, and sat near the door.  Most of the comic books were bent as children like me would bend them down to see which issues were hidden behind. I remember when they were 25 cents, then 30 cents and 35 cents and then "Still Only 35 cents." I normally would go home with two or three issues. These would be read numerous times and added to the stack I was accumulating.

Of course, like most people my age, I would get the first issues of new comics hoping that one day they would be worth thousands of dollars like the first "Action Comics" and "Batman" issues of old. Nevertheless, most of the magazines my generation bought were stored safely and because our parents didn't throw them out like those from previous generations, we now have a plethora of books that are "Fabulous First Issues" which aren't worth much because supply (in those plastic sleeves in cardboard boxes) is so high. 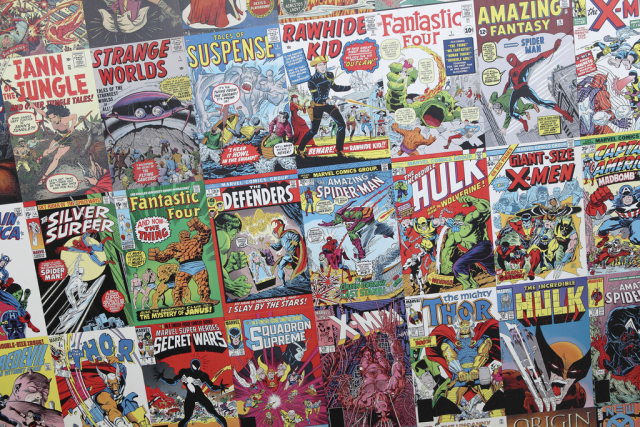 Resurgence of Superheroes in Comic Books

In case you haven't noticed, after a time when comic book sales tanked and superhero films and television shows seemed to be fading, a renewal of interest in these heroes with powers and abilities far beyond those of mortal man has occurred.

Since the Golden Age of comics (1936 - early 1950s,) heroes with brightly-colored spandex have attracted the interest of children and teenagers. During the 1940s, superhero comic interest waned. Magazine publishers began to produce books with different themes such as westerns, romance, science fiction, crime, and horror. In fact, many superhero titles were cancelled at this time. Of the dozens produced in the early 1940s, the only ones featuring superheroes to continue production by DC (the industry leader at the time) through the decade were Action Comics, Adventure Comics, Detective Comics, Batman, Superboy, Superman, Wonder Woman, and World's Finest Comics. 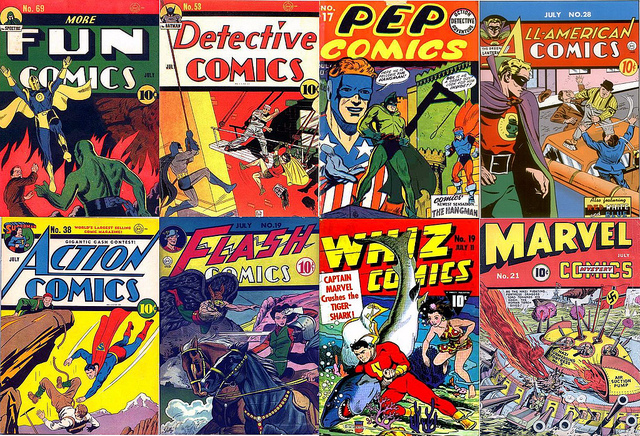 Many changes took place in the world of comic books following the Golden Age. Controversy developed over the alleged connection between comic book themes and juvenile delinquency. In 1954, the comic publishers implemented a self-regulated Comics Code Authority and a shift from crime and horror themes led to a reintroduction of superheroes. The introduction of a new Flash from DC Comics launched this era and soon upstart Marvel Comics launched the Fantastic Four and a new wave of fans was born. 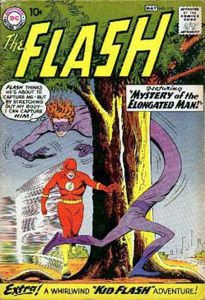 This next age of comic book production moved Marvel Comics to the forefront. It was during this time I was collecting those books sold at the 7-Eleven. While many of the mainstay heroes remained, newer ones were introduced and a return to darker plot lines emerged (e.g. racism, alcoholism, drug abuse, urban poverty, pollution, etc.). Many of the heroes introduced in this era became the models for newer television shows like "The Incredible Hulk," "Wonder Woman," and "Spider-Man" and movies like the Christopher Reeve helmed "Superman: The Movie" and Michael Keaton's "Batman." 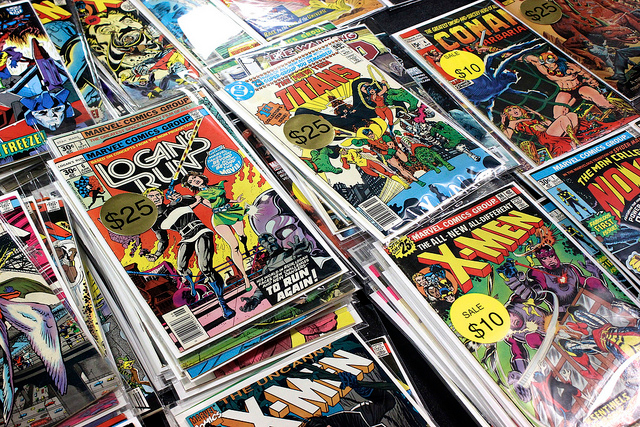 As generations shift, so too do the heroes they admire. While comic sales dropped, new business models were implemented. Character licensing was sold and plans for new films have been made. It is during this era when many comic book characters were redesigned, creators gained ownership of characters through independent comics, and publishing houses became more commercialized.

Some call this the Dark Age of Comics due to the influence of writers and artists like Frank Miller and Alan Moore. Anti-heroes (like Deadpool, the Punisher, and even Batman) became more popular. 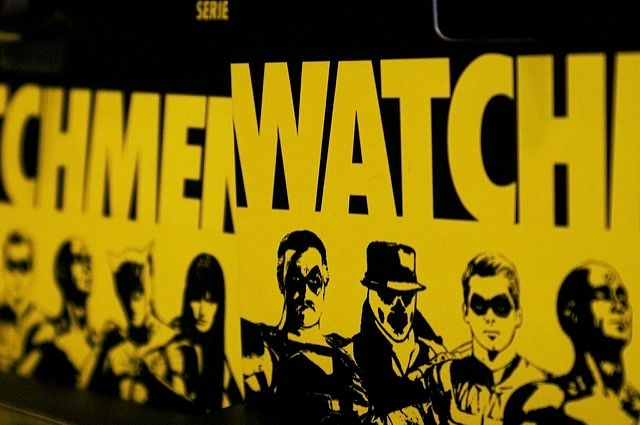 When Christopher Reeve first put on the blue tights and red "S" a new era of marketing comic book heroes developed. The "Superman" movie from the late 1970s stated that fans "would believe a man could fly" and based on ticket sales, they did. When Tim Burton introduced a darker "Batman" to the big screen in the 1980s, many fans thought it would fail, primarily because Michael Keaton was cast as Bruce Wayne/Batman and the campiness of Adam West's Caped Crusader was the prominent screen image known. When Burton's film became a hit, it seemed like superhero movies would soon take over the multiplex. Nevertheless, sequels didn't fare as well and other films like Dolph Lundgren's "The Punisher" and David Hasselhoff's "Nick Fury: Agent of S.H.I.E.L.D." proved that Hollywood hadn't quite figured out how to move the comic heroes en masse to the big screen.

Then Tobey Maguire became Spider-Man and soon thereafter Christian Bale moved under the cowl of the Dark Knight and, as they say...the rest is history.

Marvel and DC have created effective (at least financially) cinematic universes that have proven to connect with audiences. 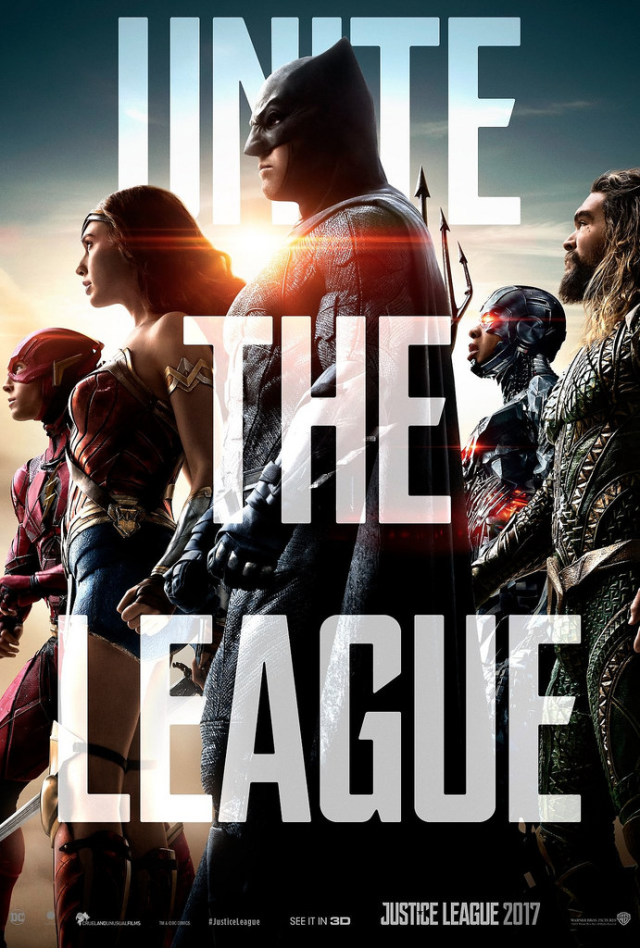 Apparently there are many fans of superheroes in our communities. These run the gamut from stereotypical fanboy or fangirl who knows intricate details of multiverses to the casual fan who just saw Gal Gadot as Wonder Woman and watches Sheldon and Leonard on "The Big Bang Theory."

In recent years, with attempts to capitalize on pop culture with catchy themes, some have preached sermons or themed kids events at churches with pseudo-superhero concepts. I'm guilty of having done this in the past, but the truth is as Dr. Timothy Paul Jones stated in a blog post from earlier this year:

For many Christians, the temptation seems to be to engage in what I would identify as a “thin reading” of these cultural artifacts (comic books and superhero films,) hunting for surface-level connections between the Bible and our favorite superhero tales. Pastors who become caught up in such thin readings may construct entire sermon series out of the latest films or feel compelled to drop references to movies into their messages—all to achieve a perceived sense of relevance by linking Scripture to culture. This is not authentic cultural engagement, however. In most instances, it’s closer to uncritical cultural appropriation. Full-fledged Christian engagement with the culture digs deeper than surface-level links and wrestles with the conflicting worldviews that undergird these artistic artifacts.

Jones' article goes deeper and is well worth your read. Read it here.

What is it about these heroes that not only connects generations and draws fans, but gathers groups together at Comic-Con and movie premieres? The religious undertones are not always subtle and the fact that most early superheroes such as Superman were rooted in Judaism (ever wondered why his name is Kal-El?) reveals many Old Testament themes woven into the histories, especially from the Golden Age.

Yet, even anti-religious sentiment and humanistic worldviews aside, there is a sense, for the most part of good, evil, truth, justice, and other such things that at the core are religious concepts.

Many of the fictional heroes and heroines either find their root in Greek and Roman mythology or at a minimum are influenced by some of these types of stories. It is my contention that the culturally popular fictional heroes are not much different than the false gods and goddesses worshipped and adored by the ancient people of Paul's day.

Paul engaged those who were far from God strategically. He went to Mars Hill for this purpose. He did not remain silent, but talked intelligently and not condescendingly to those in the crowd.

After reading numerous articles and studying God's Word on living sent as his church to a lost and dying world, I thought of Dr. Jones' postings about worldviews as revealed in comic books and the cinematic universes of Marvel and DC.

What if the church engaged this affinity group through story-telling in ways that centers on the Scripture and the Gospel? What if rather than just continuing to add programs and events to reach the already reached, we went to this "Mars Hill" in our culture today? I have talked to a few teenagers specifically about this. Some attend church, but always seem to be on the fringes. Others have no place for church in their lives and basically have denied or ignored the message of the Gospel. I asked if they would consider joining me for a study called "The Meta-narrative of the Gospel as Revealed in the Marvel and DC Cinematic Universes?" Yeah - that's what I named it, based on Dr. Jones' articles. However, I may shorten it to "Superhero Sunday Nights."

Their interest was piqued.

The answer was yes and they began to rattle off names of students I do not know. Most have no connection with a church and no relationship (or desire for a relationship) with Christ.

I am not sure what this will even look like - The Big Bang Theory meets the Bible? I hope more than that. It's just that we (the church) have done much over the decades to connect with students through affinities like athletics, drama and theater, dance, and music, but I have yet to hear of an intentionally evangelistic effort (more than a gimmick event) that seeks to connect with those whom many categorize as nerds and geeks, but most likely think deeply and love and understand the intricacies of story. Ultimately, the Story is what they need.

Some will mock. Some will ignore. Yet, I believe some will be drawn by God to Himself. It's been done before.

Now when they heard of the resurrection of the dead, some mocked. But others said, “We will hear you again about this.” So Paul went out from their midst. But some men joined him and believed, among whom also were Dionysius the Areopagite and a woman named Damaris and others with them. Acts 17:32-34 (ESV)