In the Christian corner of the Twitterverse and blogosphere, there's a bit of a disruption today. Author and pastor Eugene Peterson, in an interview with Jonathan Merritt for Religion News Service shared his current views affirming homosexuality and same-sex marriage in particular. Here's his answer when asked by Merritt on his position:

I wouldn’t have said this 20 years ago, but now I know a lot of people who are gay and lesbian and they seem to have as good a spiritual life as I do. I think that kind of debate about lesbians and gays might be over. People who disapprove of it, they’ll probably just go to another church. So we’re in a transition and I think it’s a transition for the best, for the good. I don’t think it’s something that you can parade, but it’s not a right or wrong thing as far as I’m concerned.

Peterson, most widely known for his paraphrase of the Bible titled The Message, as well as numerous other books such as A Long Obedience in the Same Direction and As Kingfishers Catch Fire has publicly made known his views on perhaps the most divisive and controversial of topics in America and especially the church today. 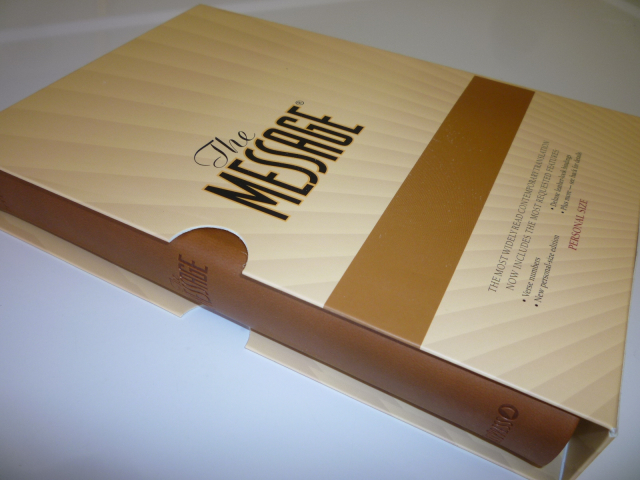 This should not be totally shocking for those who have read or follow Peterson. He served as pastor in the Presbyterian Church (USA) in the past, most notably Christ Our King Presbyterian in Bel Air, MD which, like others in the PCUSA have affirmed homosexuality and same-sex marriage. The PCUSA endorsed same-sex marriage in 2015. Not all pastors and members of PCUSA churches agree with the endorsement. Many have since left the denomination and I know of one pastor in our region who was forced to leave for not affirming homosexuality. Nevertheless, based on Peterson's statement, it appears he is lining up with the denomination's leaders and others who have stepped away from a biblical worldview on manhood, womanhood, and sexuality.

Peterson drew concern from many who have enjoyed his writings (and to be clear, he is an incredibly gifted writer) when he endorsed Rob Bell's controversial book Love Wins in 2011. Bell's revelations in his book moved him from orthodox Christianity when he disavowed the centrality of the Gospel and Christ as the only way to salvation, not to mention the existence of hell. Peterson stated at the time that while he didn't agree with Bell, he endorsed his work because he valued the conversation. While I agree that conversing about differing beliefs is valid and should occur, to endorse a book that, in my opinion, is heretical was too far. When Peterson was asked "Do evangelicals need to reexamine our doctrines of hell and damnation?" He replied:

Yes, I guess I do think they ought to reexamine.  They ought to be a good bit more biblical, not taking things out of context. But the people who are against Rob Bell are not going to reexamine anything.  They have a litmus test for who is a Christian and who is not.  But that’s not what it means to live in community.

The answer he gave then (2011) was broad and sought to be non-offensive. I agree that our answers ought to be a good bit more biblical and correct in context. Yet the eyebrows were raised and today, once more, a shift from biblical truth has been revealed.

It's easy for Christians to just "throw under the bus" those with whom we disagree. There are way too many blogs out there focused on dividing the church and built on sensational negativism. My desire is not to fan the flames of divisiveness, but to reveal once more how the cultural revolution and anti-biblical worldviews subtly, at times, seep into the church and Christianity.

You will find articles, tweets, and postings from conservative evangelicals over the years affirming some of Peterson's writings. As stated before, he truly has a gift of creativity through writing. It was today when many of these same individuals stated their disappointment in Peterson's newly revealed stance.

Peterson had stated he was stepping away from the public eye and would no longer be authoring books. Then, in the second portion of Merritt's interview, he reveals his stance on human sexuality.

Will this affect his book sales? Yes, likely. However, I don't think he really cares. His publisher may, but he likely does not. That's not a shot - just an opinion. I do think some at NavPress may be working on damage control, but it likely won't help.

LifeWay has announced that once he affirms the statements given in the interview, they will be removing his resources from their stores. This is exactly what they did with Jen Hatmaker's resources for the very same reason. The consistency is laudable and I agree with the decision.

In the interview, Merritt speaks of a day when Peterson will no longer exist. I think a poor choice of words was utilized by Merritt. This has been addressed by others, most notably Denny Burk here.

I am disappointed in Peterson's assertion regarding homosexuality and same-sex marriage.

Does this mean I won't be buying any Peterson books?

Well, yes, but I wasn't really buying his books anyway.

Does this mean I will not use The Message in my study or preaching?

Why blog about this?

I have sought to be cordial and not mean-spirited in this posting. I hope I have accomplished that. Nevertheless, some will categorize me a "hater" once again. Peterson is a pastor. He is speaking on a deeply important theological, and cultural issue. To be clear, all cultural issues are theological.

The sinfulness of humanity is common to all. The arguments regarding the affirmation of homosexuality as a lifestyle are getting louder. Some in the church are abandoning biblical truth for cultural acceptance and the current state of "fairness." Nevertheless, the truth remains. God has not changed regarding the sinful nature of humanity and the need for redemption. That's the radical message of the Gospel.

Some Christians seek to avoid this issue, mostly because friends and family members identify as LGBT. Yet, that is a weak excuse. I speak as one with a dear family member who identifies as such. To ignore the issue is to silently affirm the sin.

Denny Burk said it so well in his response today:

To say that Peterson's justification for same-sex relationships is really thin would be an understatement. His is not an argument based on Scripture. Rather, it's an argument based on sentiment. He says that he's known some nice gay people, therefore he now discards the moral consensus of the entire 2,000-year history of the Christian church. This is not pastoral wisdom. It's folly of the first order.

I agree with Burk. Pastoral responsibility leads me to clearly state that Peterson's affirmation of homosexuality and same-sex marriage (just as with Hatmaker's and others who have made such statements) is wrong, unbiblical, and sinful. Words matter and Peterson is a wonderful wordsmith. I just wish his words weren't so very damaging.