davidtarkington.com
Home Archives Subscribe
Pastor - Are You Prepared to Preach a Funeral?
Church Unity Is Not Always a Good Thing

Why Didn't Any Black Employees Come to Work Today?

Well, I know the title of this post may draw some attention (and that's the intention) but to be honest, this was the very naive question that I had almost thirty years ago when I was interning at a Fortune 500 company. I shared an office with another student - an African-American young woman (we were all young back then) who was getting her degree at another university in the city. Trina was a great office-mate and became a good friend. We worked together for just over a year and a half.

It was on a Monday in January back in 1989. I worked in an executive marketing office as computer support staff. The employees on our floor, whom I supported with my technical know-how (I could reboot computers and put dot-matrix printer paper in their printers) had worked for the corporation for decades. They were a professional, diverse, and experienced sales force.

On that Monday, I came to work and noticed that Trina was not there. Then I noticed some of the sales force were gone as well. Normally that happens when trade shows or conferences are scheduled and a group are on the road, but that wasn't the case on this day.

It didn't take long to notice the common denominator of all the absent employees was skin color. Our African-American coworkers were not present. Oh, there were some others gone as well, but the entire executive office building was void of black and brown employees on that Monday, and it was obvious.

I don't think I asked the question aloud, but I did think, "Where are all the black employees?"

The fact I had no idea why a large group of employees would be off work on MLK Day in 1989 is embarrassing. The corporation had set holidays where employees were off, plus an option for a few "personal holidays." Apparently, this allowed those who celebrated certain religious days to not work without the corporation being viewed as endorsing a religion. I imagine that was the reasoning for MLK Day to be a "personal holiday" as well. From my perspective, however, it positioned the holiday to second tier and not that important.

About ten years ago, I chose to have our church office closed on MLK Day as a time of remembrance, and honoring of the memory of what Dr. King represents in our nation.

Yep - prior to that, First Baptist Church of Orange Park viewed MLK Day as just another office work day. A hold over from a prior era? Perhaps. Maybe the changing "white-ness" of our community actually opened our eyes to the reality of Gospel ministry and racial reconciliation, which in my view cannot be separated. We do close the office now. It is a time of remembrance and hopefulness for the future.

Why Does This Matter?

There are numerous reasons Americans should seek to be honor the ideals of racial reconciliation. In our current era, the racial divide, especially between blacks and whites in our nation, seems to be widening rather than shrinking. Oh, there are good stories that abound as well, but as far as we have come from the days of slavery, the era of segregation, and the push for civil rights, it is clear we have far yet to go.

For decades, since the inception of the Southern Baptist Convention (SBC), race has been an issue. In fact, the SBC was actually founded in the 1840s by slaveholders who were opposed to the abolitionist movements and the fact the national denomination would not send missionaries who were pro-slavery.

As a Southern Baptist who is actually proud of all we do as a network of churches throughout the world in our churches, through missions, disaster relief, orphan care, and racial reconciliation, the fact remains we have a sordid past and numerous embarrassing and sinful chapters. When the SBC passed a resolution a number of years ago apologizing for the covert and overt racial separations of leaders generations prior, many white Baptists were vocal in their opposition and their belief it was unneeded. In a brief reading of SBC history, one can find resolutions on race from all the way back to 1845 at the convention's inception. Reading these "whereas" statements are interesting and sad at points, as it seems more should have been done. This is likely true, but even as white as the SBC is today, it was even whiter in the past and the resolutions, even the very best ones (and there are some great ones) were penned by a white majority with good intent, but at times not enough vigor or clarity.

Of course, that's my opinion.

Even last year at our annual meeting in Phoenix, when a resolution regarding the denouncement of the racist "alt-right" movement was brought to the floor, it was not until it failed to pass that the voting messengers realized a missed opportunity and the mistake it was.

Eventually, a resolution on the subject was reintroduced and the overwhelming affirmation was heard throughout the evangelical world. But, I caution the white pastors of SBC churches from straining their shoulder by patting themselves on the back too hard. I have talked with a number of my African-American SBC pastor friends and they have expressed a question of belonging and acceptance.

It seems that I cannot help from viewing the world through my white American lenses.

Neither can my black, brown, or any other melanin shade help but view the world from their respective lenses.

So when a moment is before us - you know, something like acknowledging the federal holiday known as Martin Luther King, Jr. Day, it is wise to not ignore it.

However, more than acknowledgment of the past must be done.

Dr. King's most famous speech shared in August 1963 in Washington DC resonates with Americans. Yet, the dream of equality among the races remains something yet to be fully experienced. So, it remains.

I believe the racial unity expressed in Dr. King's dream is more than a man-made desire. At the core is the gospel.

In the Bible, racial identity is not based on pseudoscience, which wrongly argues one's racial identity is based exclusively on biology. We must understand that the Bible's category of race has absolutely nothing to do with racial hierarchy based on biological inferiority. We must also understand that the gospel of Jesus Christ is a message about the vertical reconciliation of Jews and Gentiles to God and a message about the horizontal reconciliation of Jews and Gentiles (of all skin tones - my addition) to one another.

Some have argued that racial reconciliation is not a gospel issue. I strongly disagree with that concept. Some like Pastor Randy White, in his 2014 post "The Evangelical Response to Ferguson and Why I Don't Get It" assert that the issue is social, not gospel. In his assertion, he limits race to skin color when defining it. He, as well as others, have criticized other Southern Baptists who have asserted in light of Ferguson that the gospel has anything to do with race and racial reconciliation.

There's much more to be done and said and perhaps, if nothing else, the celebration of this holiday will force us as Christians to pray for and with our brothers and sisters in Christ, seeking gospel unity (which includes racial unity) for the glory of God and ultimately the good of his people.

For my African-American brothers, sisters, and friends, please forgive my naiveté of the past (and even the present.) It's clear why so many co-workers took a personal holiday. I wish I had as well. 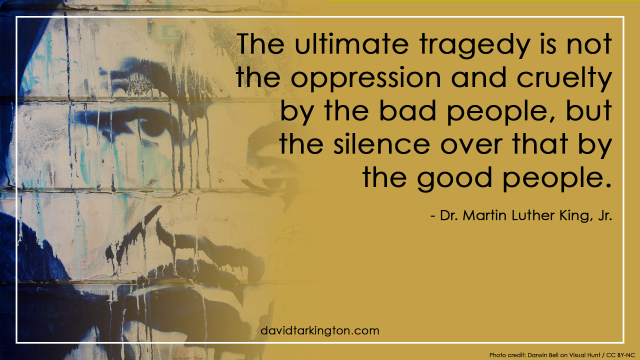 BTW - I highly recommend this book by Dr. Williams and Dr. Kevin M. Jones - Removing the Stain of Racism from the Southern Baptist Convention.

Also, for my white pastor friends, in order to broaden your concepts regarding a black Christian perspective on things, check out my friends at the Jude 3 Project. Insightful, and challenging videos, postings, and resources.

And, to answer the oft-asked question - Yes, there are more "races" than black and white, but in our context in America, with the holiday we celebrate today, and the history we own collectively, the black-white divide is the one where healing must begin, continue to grow, and expand. Remember, it's a gospel issue.