davidtarkington.com
Home Archives Subscribe
The Truth About Church Competition and "Copy + Paste" Programming
A Little Monday Encouragement for the Pastor Who Is Done

Each month, I gather with a group of friends, some Christians, others not, at a local comic book shop to discuss the connection between stories, theology, and culture. We call our gatherings CHAT (Costumed Heroes and Theology) and the open discussions have been healthy and thought-provoking.

Last Sunday evening, I threw a concept out to the group to discuss. The concept centered on forgiveness, redemption, and how a comic villain could become a hero (and ultimately, how that could happen in real life.)

The Avengers films and the Marvel Cinematic Universe has been so successful that even those who did not grow up reading comic books or care about the narratives are at least familiar with characters like Captain America, Iron Man, Hawkeye, the Scarlet Witch, etc.

The original Avengers comic book was printed in 1963 and featured the following characters (now famous from film): Iron Man, Thor, the Hulk, Ant-Man, and the Wasp. Some other minor characters like Voyager, Rick Jones, and Willie appeared as well, but the core was made up of the now famous heroes.

By issue 16 (May 1965) it was time for the team line-up to change. Over the decades this has happened often. What makes issue 16 so interesting (well, for comic readers at least) is that the new team would feature the following characters joining Captain America:

Eventually, even Black Widow would join. 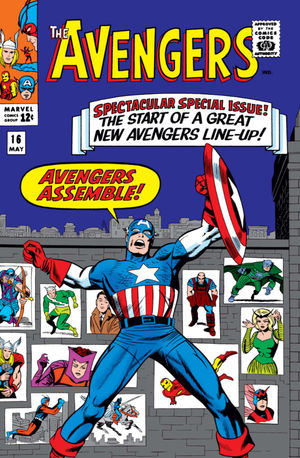 What is so significant about the addition of Hawkeye, Quicksilver, Scarlet Witch, and Black Widow? Each of these characters began as a villain in the comics.

There was much talk in our gathering about this, about forgiveness, redemption, how one can shift from one side of the aisle to the other, how a villain can become a hero, etc.

Professor Mark White states, "In the universe of comic books, unlike the real world, it's possible to change the past. Sometimes heroes or villains go back in time to change or preserve the course of history. More often, writers decide that something happened in the past that they failed to mention or that their characters did not know about, so they fill in the gaps, not changing history as much as completing it (after the fact.)"1

I have never read the actual Avengers comic where this introduction to new members happened, but I have looked it up online. I talked with some who did read it and it seems that a significant event took place to allow these former "bad guys and ladies" to be admitted into the club known as "Earth's Mightiest Heroes."

They had been redeemed.

They had an advocate.

Each characterization was unique, but by and large, Captain America vouched for the new team of heroes.

Cap, the image of virtue and morality (at least prior to the weird short-lived recent storyline where he revealed he was a Hydra/Nazi sleeper agent) basically stated "These people are with me."

And, that was enough.

It reminded me of an actual story of real people expressed in Scripture. Paul (aka Saul,) the Christian killer and enemy of the church was converted by Christ on the road to Damascus. His conversion story is covered in Acts 9.

He truly was transformed, but it would not be easy for all the current Christians (the ones previously sought by Paul for destruction) to accept him into their group.

Yet, there was a man. A righteous man who stood beside Paul an advocated for his admission to the church.

And when he had come to Jerusalem, he attempted to join the disciples. And they were all afraid of him, for they did not believe that he was a disciple. But Barnabas took him and brought him to the apostles and declared to them how on the road he had seen the Lord, who spoke to him, and how at Damascus he had preached boldly in the name of Jesus. So he went in and out among them at Jerusalem, preaching boldly in the name of the Lord. Acts 9:26-28 (ESV)

Barnabas advocated for the former villain to join the ranks of the Christians in the church, as an apostle.

I'm sure some in the church still gave Paul the side-eye on occasion, but the change was real, not orchestrated by an author trying to sell another magazine, and time would prove this.

This is what happens for each person who surrenders to Christ as Lord. In fact, apart from Christ, we all stand as enemies to God. Yet, through his grace and mercy, we are invited into his story, not as extras or unimportant characters, but as sons and daughters.

Our advocate is Jesus Christ. He has taken upon himself the entirety of humanity's sin debt. Through our repentance and surrender to him, we have the privilege of stepping away from a title of "enemy of God" to something much greater than getting to join the Avengers. We attain the rights of children and friends of God. Through Christ, we belong, not because of our righteousness, but due to his.

It's amazing how a comic book can lead to deeper conversations.