I'm That Kind of White Person 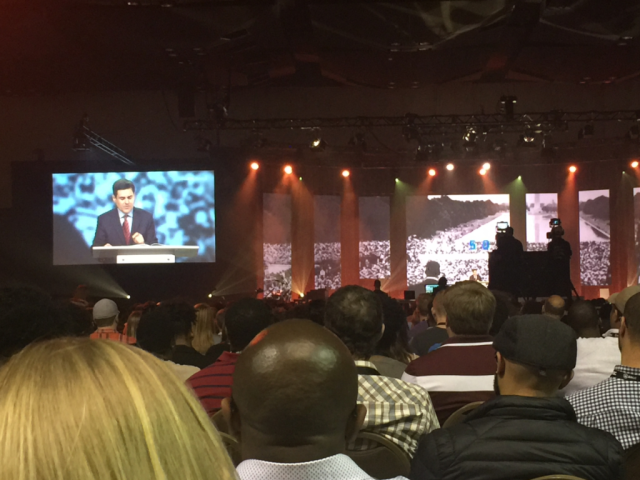 When Matt Chandler, Pastor of The Village Church, spoke at the MLK50 Conference in Memphis, Tennessee, he asked this question...

"What kind of white people come to a conference like this? That wasn't a joke. I don't know why you all are giggling. Because if you look at Twitter, it looks like there ain't no white people in the fight."

The question was part of Chandler's longer message. It wasn't the key point. It was, however a question that elicited some laughter from some, raised eyebrows from others, and an immediate challenge to one white pastor from the suburbs who traveled to Memphis with friends to attend the conference.

Fifty years ago, on a balcony of the Lorraine Hotel in Memphis, Tennessee, Dr. Martin Luther King, Jr. was shot and killed by an assassin. At age thirty-nine, Dr. King was standing in the crosshairs (tragically, literally) of a divide in our nation between races. He was celebrated by some and vilified by others. Though the Civil Rights Act of 1964 effectively ended segregation, the racial divide in the nation continued.

Sadly, even Christians were taking sides and fighting over allowing people of color to join or attend churches designated as "white churches" for generations. For a man born the year Dr. King was assassinated, it is impossible for me to understand fully, other than through reading historical accounts, listening to testimony, and watching documentaries of the era, what was happening in our nation.

Yet, here we are, fifty years later. That's five decades of living in an America that proclaims that racial division is a historical story, not a current one. At least that's the narrative. We now understand that while Dr. King's "dream" is celebrated, the division between races, most notably between some blacks and some whites, exists. Not only does it exist, but it seems to be widening as everything is politicized, messages are shortened to be tweetable, and biblically speaking, our enemy still seeks to steal, kill, and destroy.

As is the case with everyone, I tend to view life from a particular set of lenses. These lenses can be defined a number of ways, such as white, male, middle-class, suburban, evangelical, conservative, Christian, Baptist, pastoral, tall, formerly athletic, etc.

That's not an apology. That's just a reality. In fact, I am not sorry that I am any of those things. Well...I am sorry that I'm formerly athletic. I really need to do something about that (typing as I drink my morning coffee and eat a donut.)

Nevertheless, recognizing that viewpoints are different, based on numerous factors, the truth becomes clear - I do not...no I cannot fully know what it is like to live as a black man today. Even if I attempted to pull off a John Howard Griffin Black Like Me charade, it would not be authentic. It may be insightful, but it would be temporary and fake.

One of my friends in ministry, an African-American pastor, was speaking in a group around a table and was describing some things unique to his journey. He looked to me and said "You know how it is, right?" I had to answer, "I don't. Why? Because I'm a white man and while we are brothers in Christ, the fact remains that we have different experiences and some of those are based on the color of our skin. So, you're going to have to help me understand."

Dr. Eric Mason's message on gospel unity was clear, powerful, and convictional. Unity is needed in the body of Christ. Yet, unity is not uniformity. For some, this is a hard concept to grasp it seems. Uniformity states that everyone must look alike, share the same heart language, culture, and heritage.

It is not the outward accoutrements that unify the Body. It is Christ alone that brings unity. And it is this that the Enemy attacks continually. Doctrine unifies the church. The gospel unifies the church. Skin tone, heart language, cultural heritage, clothing style, economic level, etc. are not the unifying items that allow Christians to call each other brother and sister. It is the cross of Christ that brings unity among those who come from varied backgrounds. This must be declared and lived, and not ignored.

Its has been said for years that Sunday mornings in our churches in America, remains the most segregated hour still. There are exceptions, but there are many instances in the evangelical world where this still remains true. Dr. Charlie Dates preached on Tuesday evening of the conference. His assigned topic was the continually segregated church. Addressing the crowd, Dr. Dates challenged churches to tear down the remaining walls of segregation, acknowledging that many are not intentionally divided. The address by Dr. Mason the following day chastised rightly, the predominantly white churches seeking to be multi-ethnic by simply hiring a person of color for their staff team, who otherwise was unqualified. Therefore, the call is to gospel living, not just gospel preaching.

Not All Christians Celebrate

Using Dr. King's assassination as the backdrop for the conference allowed speakers and attendees to have open and clear dialogue that often does not happens. It has become clear based on blog articles, tweets, and social media postings, that not everyone celebrated the idea of a gospel-centric event connected with Dr. King's legacy. Some even have equated what was said in the MLK50 Conference to other events in the city of Memphis commemorating the 50th anniversary. While all MLK50 events and gatherings held in Memphis (and there were numerous unrelated events) centered on the assassination, not all were focused on ensuring the gospel was proclaimed and biblical fidelity upheld. And, based on some things I have read from Christian writers and pastors, some of those would even declare what was preached and stated at the MLK Conference I attended was not biblical.

Whenever Christians speak about race, a dividing line develops. The vitriol that is spouted from believers and followers of Christ is done often under the guise of contending for the gospel, but actually comes across as anything but.

Would I agree with every word spoken by every speaker and attendee at the MLK50 Conference? No. Yet, I do agree that the gospel is unchanging, is true, and is vital for the church in all areas of worship, service, and ministry.

There are documented questions about Dr. King's theology. Debates rage about what he truly believed and what he didn't when it comes to orthodoxy. These were not ignored at the conference. There was no sugar-coating of some of the difficult topics. Dr. John Piper addressed his feelings on this well in his sermon.

For Those Tired of Apologizing

It has been said many times, by many people - even those within the church - that they are tired of apologizing for the sins of the past, especially the sins of our ancestors. I have heard this from white Christians (and being that I'm a white Christian, I'll just speak from this perspective.) As a Southern Baptist pastor, I remember when the SBC adopted a resolution of repentance for the support of and ignoring of slavery as an issue in America. While the resolution passed, it was soon discussed by many that confessing the sins of long dead Southern Baptists seemed for some to be a waste, and for others unbiblical.

Yet, there is biblical precedent for the repentance of corporate sin of those in the past that had led to division and sinful behavior. The sin of ignorance once revealed, must be addressed. I cannot attest to the feelings of my black brothers and sisters who feel personally slighted when reading of the history and founding of the Southern Baptist Convention, but I acknowledge the real pain (even though the pain was felt at first by their ancestors) and hurt experienced.

I was recently studying the book of Ezra and noticed in chapter 9 that he was compelled and convicted by God to lead the people into a time of repentance and confession of sins that originated with their fore-bearers. In this case, it was the sin of intermarrying non believers of God. It wasn't a racial intermarriage, that was condemned. It was a faith intermarriage that was condemned by God. Yet, the ancestors of these people had done so and it had gone unconfessed for generations. I wrote of that here.

From this, it becomes clear that we are the pastors, leaders, Christians today who must stand for truth, affirm the gospel unapologetically, and humbly repent of sins that continue to divide and work against the unity in the faith that God commands.

Yet, once confessed, the realization that the road ahead remains. Therefore, as we glance and address that which is in the rear view mirror, may we be united in the gospel as we move forward, not simply for a dream articulated by a man in the 1960s, but a message and commission declared by God to His church, for His glory and our good.

Why This White Guy Attended

Simply put - I attended this conference because I know there is a chasm in our nation, and in our churches that can only be healed through the gospel of Jesus Christ. I admire much of what Dr. King stood for, and his bravery exhibited through his ministry. I do not ignore the questions addressed by Dr. Piper and others at the conference. I know, as do pastor friends, that Dr. King was far from perfect, just as we are. I also know that he should not have been assassinated. Yet, as we reflect on an era in our nation where division defined us, we hope that things are better today...only to realize we may not have progressed as far as many think.

I attended because I love my brothers and sisters in Christ.

I attended because to ignore the racial divide in our churches and nation makes me as complicit as those who did so in generations past.

I guess I'm the kind of white person who is honestly seeking to live for the sake of the gospel, unapologetically lead others to Christ as God draws them to Himself, and to not be guilty of sinning privately or corporately by remaining silent about the things that matter to God and his church.

All videos and the complete sermons from the MLK50 Conference are available at The Gospel Coalition's Vimeo page here.